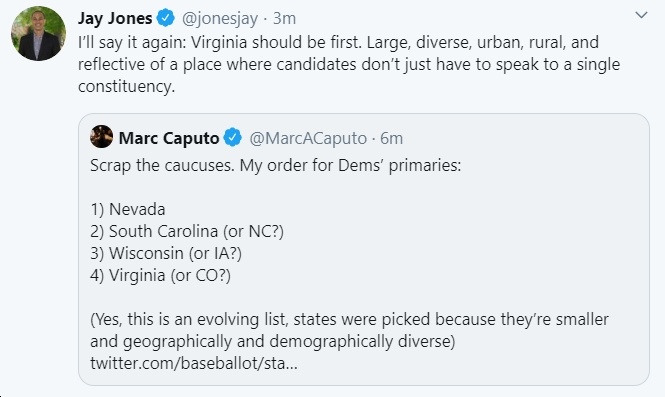 Virginia Del. Jay Jones (D-Norfolk) is absolutely right that Virginia should be the first Democratic primary contest – not Iowa or New Hampshire, obviously. Here are 10 reasons why:

Bottom line: Del. Jay Jones is absolutely right – Virginia should be strongly considered as a replacement for Iowa and New Hampshire as the first Democratic presidential nominating contest, starting in the 2024 presidential cycle. If someone can come up with a better – more diverse, representative, competitive, large (but not TOO large), etc. – state than Virginia, I’d love to hear it, but I’m skeptical that anyone will be able to do so.

P.S. It should go without saying that Virginia should/would use a primary, NOT a ridiculous caucus. I’d also hope that Virginia would use Ranked Choice Voting.