Hannibal, born in 247 BC, was the son of general Hamilcar. He led troops in the first Punic war and is credited with giving Carthage (Now Tunisia) its most triumphant hour. He ranks right up there with Alexander the Great and Julius Caesar as one of the most brilliant military strategists of the ancient world. Hannibal’s elephant-back alpine crossings play a big part in that reputation.  If you ask Delegate Daniel Helmer (D), he may tell you that the ethos of Hannibal’s days, (a time when raping women and pillaging villages were commonplace), are still applicable today.

Virginia legislators are currently considering SB 1030,   which would prevent the public from coming into contact with “dangerous captive animals.” Whether elephants should appear on that list has become the subject of much debate.

The intent of SB 1030 is to keep the public safe from captive dangerous animals. The bill originally defined dangerous animals as bear, cougar, jaguar, leopard, lion, nonhuman primate, tigers and elephants. However, after much lobbying by the owner of the only elephant housed in the Commonwealth, the Senate amended the bill to remove elephants from the definition, spurring animals advocates into action.

On February 19th, the House subcommittee rallied back by voting 6-2 to include elephants back into the definition of dangerous animals. Then in a  tennis match resembling a Wimbledon final, this past Wednesday the full committee, again removed elephants from the bill following a motion by Delegate Tony Wilt (R), a comment from Delegate  Helmer that “humans have been riding elephants since the days of Hannibal”, along with additional testimony from Karl Mogensen the owner of Asha and The Natural Bridge Zoo.  Mogensen states Asha is more like a Golden Retriever that lies under your coffee table than a dangerous animal. Interestingly, Mogensen was the only member of the public permitted to give testimony.

Below: Asha the elephant giving rides at the Natural Bridge Zoo. It is estimated she gives 10,000 rides per year at $10 per ride. Foot problems caused by standing on hard surfaces, exasperated by lack of adequate veterinary care are one of the leading causes of euthanasia in captive elephants. Asha’s foot problems are well documented by both the USDA and the Virginia Dept.of Game and Inland Fisheries. 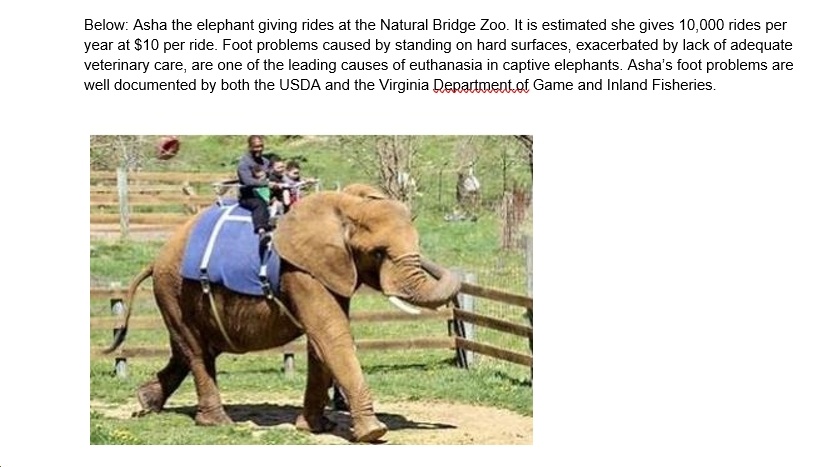 During these hearings, the waters were muddied with focus placed only on Asha as each side debated the conditions at the zoo. A debate that can easily be silenced should one take the time to look at the quarter  century of well over 100 documented Federal Animal Welfare Act Violations, including repeat violations, for unsafe handling practices of animals (including Asha) and failure to provide veterinary care.

But, again we digress. The true question really is simple,“Are elephants captive dangerous animals?” If the answer is “yes,”  they should be included in the bill’s definition of such. For the answer, let’s turn to some authoritative proof of the dangerous propensity of elephants.  The Association of Zoos and Aquariums’ accredited institutions are differentiated as exemplary facilities through the vigorous and voluntary commitment to shared high standards. These zoos use “protected contact,” meaning there should always be a barrier between elephants and zoo staff. No AZA accredited zoo has offered elephant rides in many years.

The United States Department of Agriculture recognizes elephants as “dangerous animals.” Per USDA APHIS Code of Regulations,  “Handling of animals…During public exhibition, dangerous animals such as lions, tigers, wolves, bears, or elephants must be under the direct control and supervision of a knowledgeable and experienced animal handler.” The federal agency tasked with enforcing the Animal Welfare Act defines elephants as dangerous, is the Commonwealth in a position to dispute it? Now let’s take a look at the stats. Since 1990, in the US alone, elephants have killed 17 people and injured at least 140 others, including 30 children in 33 different states. Still not convinced? Here are links to reports and video of a typical “elephant gone wild scenario.”

SB 1030 aims to protect the citizens of the Commonwealth from injury of ALL dangerous captive animals.Those opposed to keeping elephants on the bill continually raised the issue that Asha is the only elephant in Virginia. What they fail to understand is that circuses with elephants often tour Virginia. These circuses frequently offer elephant encounters. These exhibitors ALL have histories of unsafe elephant handling and there have already been incidents in Virginia. In March, 2017, officials in Norfolk denied Garden Bros. permits to exhibit animals at its shows at the Ted Constant Convocation Center because of the exhibitor’s record of public-safety and animal-welfare violations.

Garden Brothers Circus is scheduled to begin a Virginia tour on March 6, 2020 for 12 shows in four days in five cities/towns. This circus has traditionally toured Virginia with multiple elephants that are allowed contact with the public. This operator has a long history of violations including unsafe handling of elephants that put the public at risk.

As far as The Natural Bridge Zoo and its one elephant that lives in solitary confinement, it is undisputed that she attacked and killed another elephant, has attacked her handler, throwing him over a wall and trampling him. By the trainer’s own admission, Asha is the most dangerous animal on the property. Even Mogensen’s own granddaughter (not the one who served time in jail for drowning a wallaby), Gretchen, described Asha as the most dangerous animal at the zoo.

SB 1030 would NOT prevent Virginia residents from owning, exhibiting, or offering educational sessions to groups with elephants, nor prevent the public from getting reasonably close to, photographing or taking video of elephants. What SB 1030 will do is keep the public safe. All it takes is one accident, one child, and yes Virginia can harken back to the time of Hannibal. But do we really want that? The bill goes to the House floor on Monday. For the sake of both the Virginia public and animals, we’re hoping elephants are once again included in the final version.