Yesterday, two Virginia State Senate Republicans gave speeches, both of which were ridiculous in their own ways. Check out the video, below.

First, Senate Minority Leader Tommy Norment (R) – after a VERY long “Crossover Day,” in which the Senate didn’t adjourn to midnight or thereabouts – got up to whine about how damn busy the Senate is now, under Democratic control, and how it’s *such* a burden on everyone. According to Norment, a “cap [should] be put on the number of bills that any individual senator can introduce”; the subcommittees and committees should, basically, do their damn job; the “substitutes” are too friggin’ long; and, basically…GET OFF MY DAMN LAWN!!! Of course, as Senate Majority Leader Dick Saslaw (D) pointed out a few minutes later:

“I think the one thing that may be overlooked by everybody – think back just last night as an example, or yesterday – how many bills…it seemed to me that there were probably somewhere between 20 and 35 bills just as a guess that passed by a vote of 21 to 19. Every single one of those bills, every last one of them, would have never made it out of committee until this year. Not a single one of them would have gotten out of committee. And I think if you go back and you look at some of these things – the minimum wage, the gun bills, a million things – that have never gotten out of committee, all the sudden they’re on the floor. And these bills took up quite a bit of debate time. And I would imagine that if you take all the 21-19 votes that have been made over the last four and a half weeks, five weeks, my guess would be that we probably would have been getting out of here…we definitely wouldn’t have gotten out at 1 in the morning as we did last night; we’d have probably gotten out at 9 or 10…and you can bet…so many of the sessions that we’ve had this year have been, we get out at 3, 3:30, 4 o’clock, and a lot of that is because of these bills that are coming out and passing 21-19 never made it out before. And that accounts for a lot of it…”

In short, it’s busier this year, because Democrats actually care about getting stuff done, and are pushing through a lot of excellent legislation, whereas when Republicans were in charge, they mostly focused on just killing stuff. Which is probably, at the heart of it, the real reason why Tommy Norment is upset.

Next, far-right Sen. Amanda Chase (renegade R) got up to argue that she “would never ever want to make a legislator feel like they were personally coming to under attack.” Chase added that she “would never put your personal information contact information on a Facebook page,” but only “information that is publicly available through Virginia General Assembly dot gov.” According to Chase, “my team has taken advantage of this new social media [Facebook] in order to make that information more easily accessible, and so that is my heart, it is never to hurt or intimidate or make any legislator feel threatened…we owe it to each other…to be respectful and respect that we may have individual differences on ideology and political beliefs and differences…my heart is not to be a difficult, troublesome senator from Chesterfield County.”

Fortunately, you can compare Chase’s words yesterday on the Senate floor with her actions, of course (see screen shots of Chase’s posts, below the video, calling out individual Senators by name and urging people to flood their offices with messages). You can also listen to the powerful response Sen. Mamie Locke (D) had to Chase’s disingenuous remarks.

“This is the first year that I have been fearful for my life and for the lives of members of the Democratic caucus because of Facebook. I no longer go on to my Facebook account because of comments that might be there. And one of our members has had her life threatened with, ‘I will shoot you in the head.’ Offices being called with ‘die b-word’ and people hanging up as a result of information that’s being put out there on members of this caucus. And that’s unacceptable and as a result of someone else’s actions. So it isn’t necessarily anyone retaliating against someone, but when you put an individual’s life in danger by by acting in a certain way, and you put someone’s family or someone’s staff member in a dangerous situation, that’s unacceptable. And I’m sorry, that kind of behavior is unacceptable, simply because we may disagree on on a political issue. That’s going to happen in a political environment where we disagree, but it’s okay to disagree without being disagreeable – that’s the nature of politics.”

Oh yeah, and as if all that wasn’t enough, hard-right Sen. Mark Obenshain (R) then stood up to say that he’s “never felt intimidated or threatened,” but to complain that he’s been called a LIAR on Facebook. According to Obenshain, that’s “disappointing” and “not the way I like to think that we, as a member of a collegial body, deal with one another.” Of course, that makes absolutely no sense on several levels. First of all, it is objectively, verifiably, provably, demonstrably the case that Obenshain lies all the time. Check out just about any of his speeches this session and see for yourself. Second, citing some random person on Facebook calling him a liar has absolutely ZERO relevance to how members of the State Senate treat each other in that “collegial body.” Third, being called a liar by some random person on Facebook is in no way, shape or form comparable to what Senator Chase did regarding her Democratic colleagues. But, of course, Obenshain didn’t call her out, let alone express any solidarity with Sen. Locke. Fascinating how this works, huh? 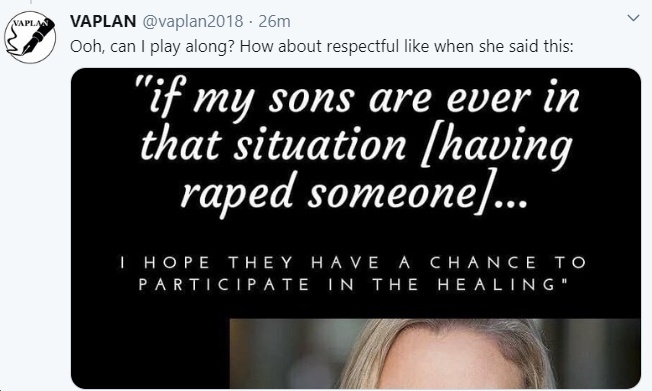 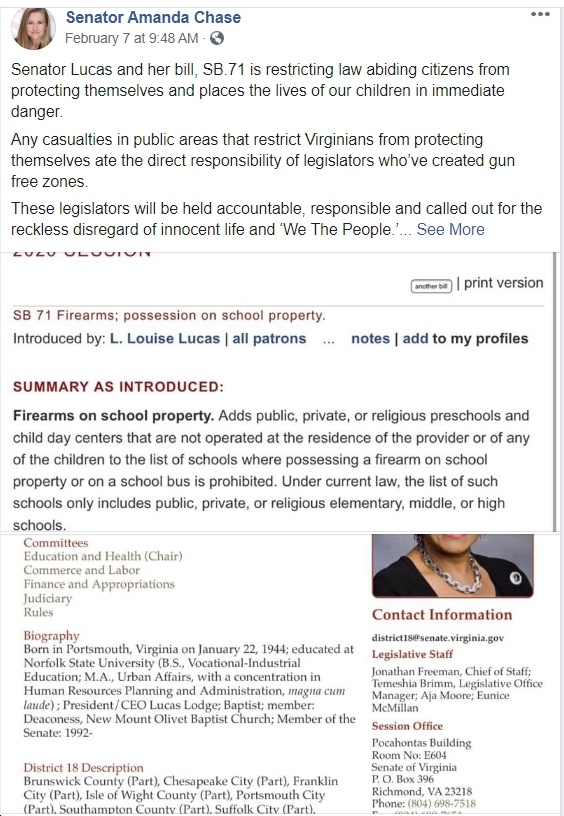 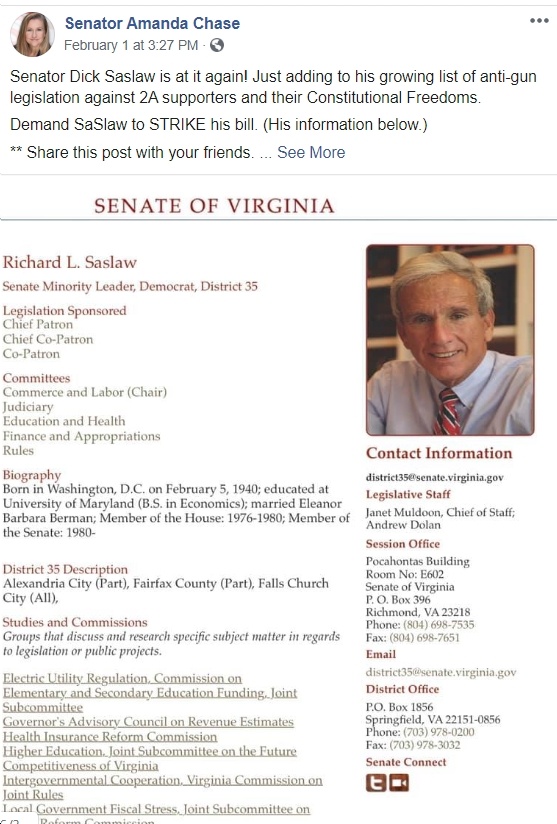 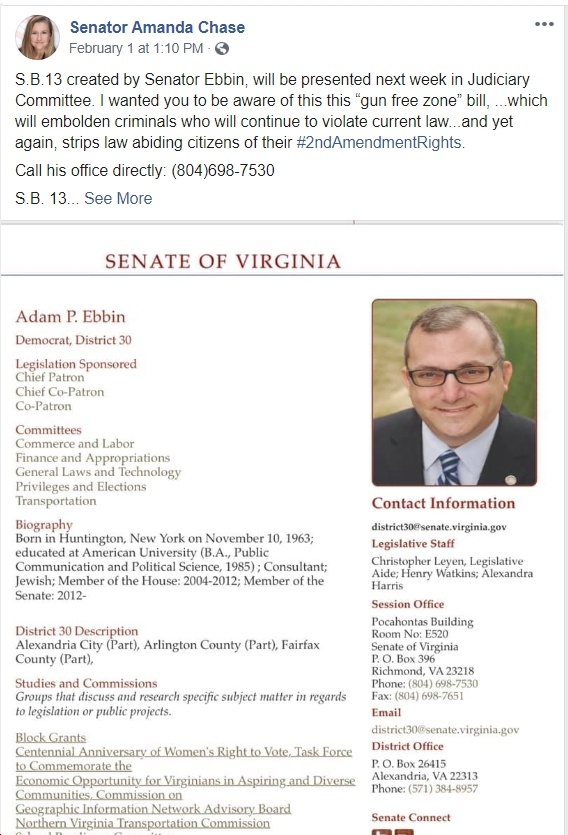 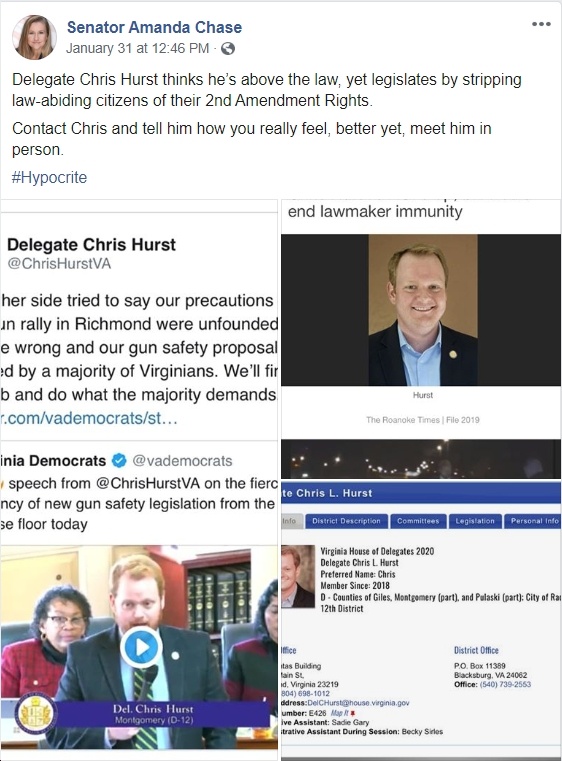 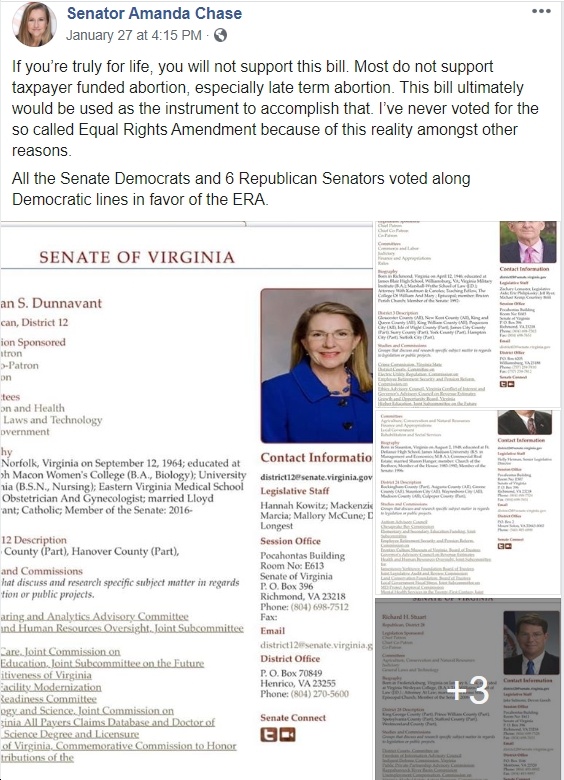 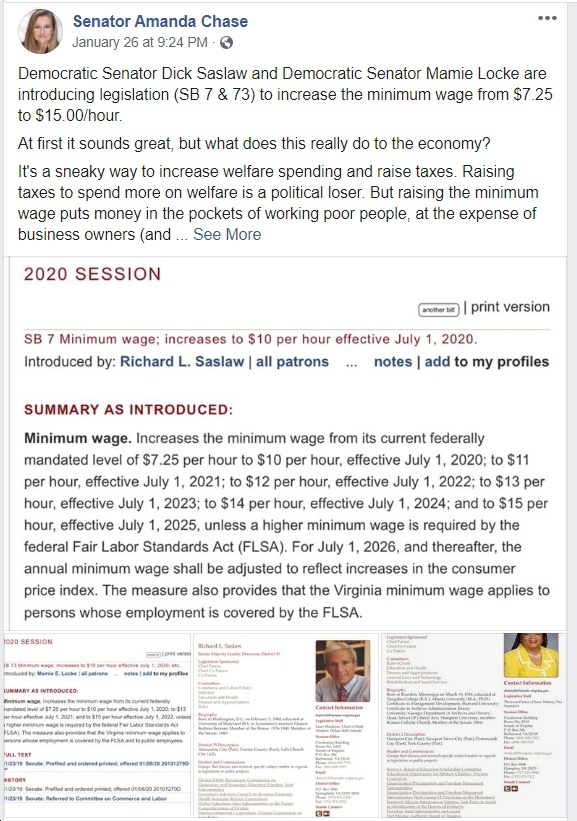 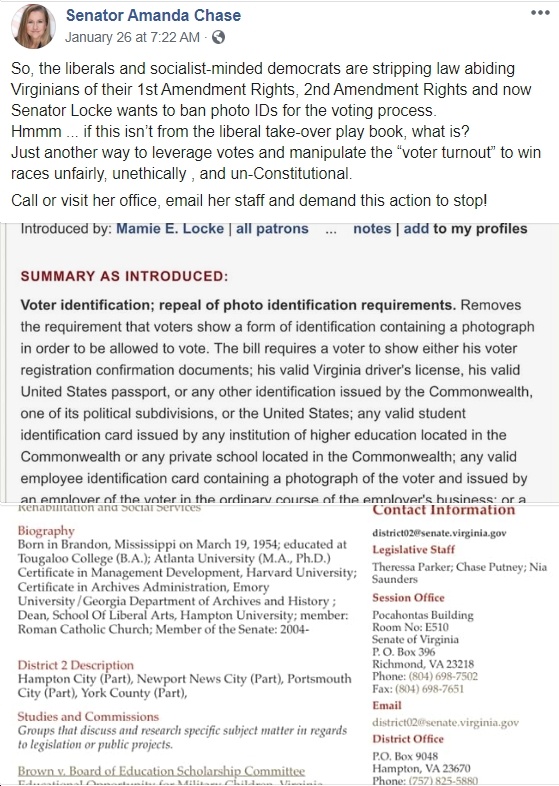