Petersen Senate Sentinel: “My Longest Newsletter: Half History, Half Commentary and Half Information”

During my college years, I lacked the intelligence to study medicine.  But I loved history, and I apply that even today as a State Senator.

Never has that been more critical than the past three weeks as Virginia has wrestled with its most serious pandemic in 100 years.

Pandemics have shaped human history.  The “Black Death” in the 1300’s devastated the population in Old World Europe.  Historians estimate that one-third of the population died as a result of the plague.  The decimation set back European civilization for hundreds of years, until the Renaissance and Reformation created the modern Western world.

The agrarian nature of the early United States militated against pandemics.  That changed during World War I when the “doughboy” Army put millions of young men from diverse backgrounds into military camps.  At some point in 1918, an influenza epidemic spread through these young soldiers and eventually into the civilian population.  In the context of a World War, it crossed into Europe (or perhaps had started there) and eventually reached areas in India and Africa, borne likely by trade or returning Allied soldiers.

During the course of the “Spanish flu” epidemic (so named because that nation first publicized it), nearly twenty million people died globally, including one million in the U.S.  It was a transformative virus and led to a loss of life which was comparable to WWI itself.

But here’s the remarkable thing …

In histories from the time period, few talked about the epidemic.  The media covered it only on a local basis.  There were no national emergency declarations. Indeed, the nation was wholly focused on fighting (and winning) a war against Imperial Germany.  The fact that thousands died in each state was treated largely as a fact of life.  People lived, people died.  It wasn’t until the 1990’s that serious scholarship actually investigated the causes and eventual cure for the 1918 influenza pandemic.

Fast forward 100 years and we live in a world of modern medicine and social media.  There are hourly updates as more people are tested for COVID-19 and the number of afflicted grows with each passing day (and in line with greater testing).  The phrase “flattening the curve” has become the watch word for every public official.

The wall-to-wall coverage has led to some outsize effects:  in Virginia, we have approx. 150 diagnosed cases to date, with two-dozen currently hospitalized.  Undoubtedly that number will grow as more testing occurs.  Meanwhile, the decision (led by the Federal government) to effectively shut down the retail service industry has led to devastating consequences.  In Virginia, we had 30,000 people file for unemployment benefits this week — the most in our history.  We cannot sustain that job loss. Period.

There are necessary steps needed to react to and create boundaries around this virus.  In my opinion, the most critical is to immediately increase access to COVID-19 TESTING so we know who has this virus and can place appropriate borders around vulnerable persons and communities.  This will also allow us to track the actual spread of the virus, rather than simply reporting higher “case numbers” which is driven by increased testing.  Yesterday, I asked the Governor to make this our #1 priority.

On the flip side, the single-minded call of some to “shut down” business indefinitely puts a death sentence on our economy and ourselves.  Without work, there is no commerce.  Without commerce, you cannot obtain food, medicine or shelter.  If you produce nothing, you will eventually have nothing to consume.

Currently, we are projecting 9% unemployment by 3Q 2020.  Should we make it 20% in order to avoid reaching 1,000 reported COVID cases?  Should we close our public schools indefinitely, like we did during Massive Resistance in the 1950’s?  These are serious questions.

We must find a sober balance between public safety and public economy.  It may require re-imagining certain industries, at least temporarily.  But we make no mistake about it — we must have the ability to earn our bread.  No epidemic can be allowed to take that away.

Not a sermon, just a thought.  I welcome (as always) your suggestions and comments.

We’ll get through this together.

Now, here’s a very different approach from Sen. Petersen’s, by Del. Lee Carter (D-Manassas). In short, Del. Carter calls for “emergency actions in an effort to save lives and mitigate the spread of COVID-19,” including “ordering all Virginians to shelter in place within their homes,” close “all bars, restaurants, and entertainment venues to all but delivery and carry-out service,” order the “immediate suspension of all non-critical medical and dental procedures to preserve PPE supplies for critical care,” etc. In sum, this is a *much* more aggressive approach than Sen. Petersen appears to be advocating. Personally, given what we’re seeing in Europe right now, and increasingly in the United States, I’d lean towards a more aggressive approach, if anything, although so far, I do think Gov. Northam’s been doing a very good job in balancing things. I *do* agree with Sen. Petersen, though, that we need a massive increase in COVID-19 testing, so that we can figure out who has the disease and who doesn’t, and proceed accordingly. Which approach do you prefer? 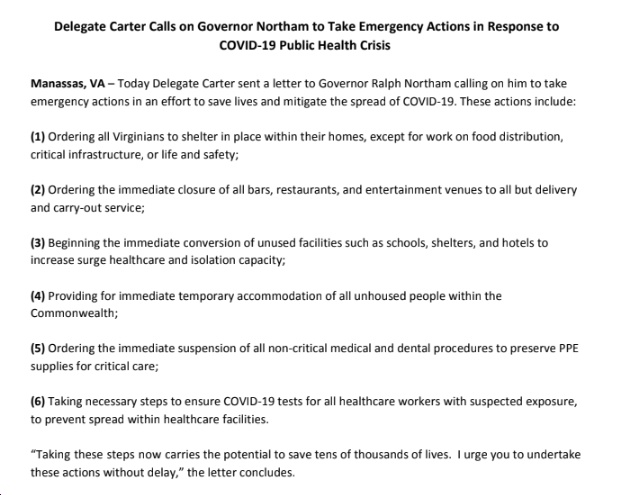 Carter Letter to Northam on COVID-19