Sensing a pattern here from Virginia Republicans – Del. Terry Kilgore, Sen. Mark Obenshain and Sen. Jen Kiggans? That’s right, if you didn’t get the hint, they want to ignore public health experts regarding the continued need for “social distancing” and other measures to combat COVID-19. Basically, their attitude is, damn the torpedoes, screw the experts and…open the state up ASAP! Of course, doing that would almost certainly result in lots of sick and dead people, *as well as* a ruined economy, the very thing these Republicans supposedly care about. But whatever…logic, science and reason are not exactly these folks’ strong suit.

Oh, and absolutely do NOT miss the video, at the bottom (in more ways than one! LOL), from conspiracy theorizing Sen. Amanda Chase (R). According to Chase – yes, the same person who said “It’s those who are naive and unprepared that end up raped” and  “The ERA Amendment is nothing more than a ploy by the left to eliminate gender altogether”: 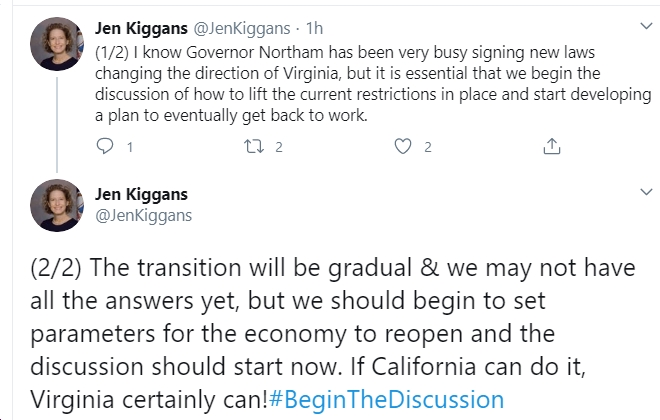 Friday Night Update from the ER in Arlington, VA: Moderna’s New Combination Vaccine Booster “could be available later this summer”