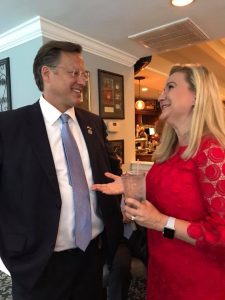 There are a bunch of super-extreme, super-crazy Republicans in the Virginia General Assembly, with Sen. Amanda Chase (pictured here with her fellow far-right crazy, Dave Brat) certainly qualifying as one (e.g., she’s an anti-LGBT bigot; also see here for Chase ranting about something regarding optometrists being able to perform abortions, in response to this superb bill by Sen. Jennifer McClellan on guaranteeing women their right to have a lawful abortion). For instance, check out how Sen. Chase’s Facebook post on Virginia approving a written constitution with a Declaration of Rights rapidly devolves into a series of bizarre, outlandish, ignorant comments by Chase regarding the Equal Rights Amendment (bolding added by me for emphasis).

P.S. Note that Ralph Northam got 46% of the vote in the district Chase currently (mis)represents, so it would be tough but not impossible for a strong Democratic candidate to win here…

Senator Amanda Chase Let’s be honest. The ERA Amendment is nothing more than a ploy by the left to eliminate gender altogether.

Senator Amanda Chase Oh please. Educate yourself from something other than the talking points from the left. Not all educated, successful women support the ERA amendment today. Stop playing the victim. This is 2018 not 1952. Yes. I agree. Women have come a long way and many women before us had to fight for freedom and equal opportunity but never in a million years would the average woman want to be treated in the law the exact same as a man. There are obvious physical differences that should be respected.

Senator Amanda Chase Are you familiar with the Equal Pay Act? A federal law, the Equal Pay Act (EPA), requires employers to pay men and women equally for doing the same work, equal pay for equal work. The Equal Pay Act was passed in 1963 as an amendment to the Fair Labor Standards Act and can be found at 29 U.S.C. § 206.

Evidence emerges in the early years. When young women start jobs, they typically earn nearly as much as young men. In one 2013 sample, among workers who were ages 25 to 34, women on average made 93 percent as much as men, according to the Pew Research Center.

The disparity grows, however, as women age. One popular explanation: motherhood. Women, more often than men, tend to leave the workforce for extended periods to have and raise children. They’re also more likely to leave the office early to pick up the kids or take a day off when a family member is sick.

June O’Neill, former director of the Congressional Budget Office, has noted that many women simply prefer to take less demanding, more flexible roles in order to better accommodate their families. Their choices, O’Neill argues, doesn’t require government intervention. “Any wage gap is rooted more in social trends and tendencies than malicious discrimination by employers,” she wrote.

Senator Amanda Chase And here’s why true conservatives won’t support the ERA Amendment. Instead of all people being treated equal some want special treatment under the law.

LGBTQIA Equal Rights – Gay rights advocates argued that prohibitions against same-sex marriage were a form of sex discrimination because one party is denied marriage to another because of that individual’s sex. [6] Unfortunately, in the landmark Supreme Court ruling in Obergefell v. Hodges same-sex marriage case, “the majority opinion avoided any determination that discrimination on the basis of sexual orientation is subject to any form of heightened judicial scrutiny (such as strict or intermediate), or that homosexuals or bisexuals (of any gender) are a protected class.”[7]

The ERA would require strict scrutiny in challenges to the many state laws that deny LGBTQIA persons equal access to public accommodations, permit discrimination in housing, employment discrimination, credit and retail services, jury service and educational programs, among others.

Reproductive Rights – Although opinion is divided on the question, an ERA –properly interpreted – could negate the hundreds of laws that have been passed restricting access to abortion care and contraception. Denial of legal and appropriate medical care for women – and only women – is sex discrimination and a powerful ERA should recognize and prohibit that most harmful of discriminatory actions.

Senator Amanda Chase I’m just trying to better understand your concern. In 2018 how do you feel you as a woman are not equal to a man?

Amanda Freeman Chase Shannon do you also believe in burning the flag because you feel it represents the government? Just curious.

Jenifer Strozier Senator Amanda Chase what? You don’t support the ERA? And please explain what you mean by eliminating gender.

Jenifer Strozier Senator Amanda Chase oh boy. I’m not a constituent but I’ll do everything I can to replace you. Your bigotry knows know bounds. Also MANY conservatives support the ERA.

Sara Louise Senator Amanda Chase I am still confused by your responses as to what you mean by “eliminate gender” as a motive of the ERA. Can you please just tell me, in your own words, do you oppose the ERA because you think it would further “hurt” LGBTQIA rights or “help” them? I don’t speak legalise. Thank you.