Thanks to Sen. Scott Surovell for providing this excellent, albeit depressing, synposis of where we’re at right now regarding Virginia’s budget situation. In short:

On and on. In short, the amazing situation we found ourselves in heading out of the 2020 Virginia General Assembly session now seems like ancient history. Although, on the bright side, it’s a lot better that we entered this crisis flush with “rain day” funds and, in general, with a strong economic situation. Still, the next few weeks are going to be painful, starting with Gov. Northam’s announced amendments and vetoes on April 12, followed by the “reconvene” General Assembly session on April 22. Avert your eyes, I guess, if you don’t have a strong stomach, but this is the “upside-down”/”Stranger Things” world we’re currently living in. 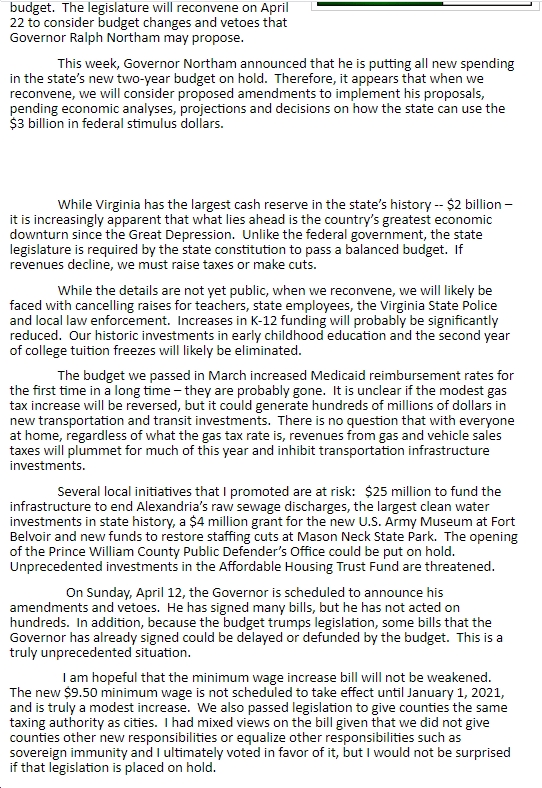 It's good to know that Virginia Democrats have got a friend - a great one named Carole King! https://bluevirginia.us/2021/10/tuesday-news-trump-files-lawsuit-to-block-release-of-jan-6-documents-just-how-disastrous-is-manchins-climate-obstruction-media-outlets-should-not-use-colin-powells-death-to-push-vac#comment-5576416676 h/t @christinafreund

If you're not following @DougJBalloon (New York Times Pitchbot), you're really missing out, as it's 24/7, spot-on satire of the news media's idiocy, both-sidesism, etc. Check it out! https://bluevirginia.us/2021/10/tuesday-news-trump-files-lawsuit-to-block-release-of-jan-6-documents-just-how-disastrous-is-manchins-climate-obstruction-media-outlets-should-not-use-colin-powells-death-to-push-vac#comment-5576415247