As you’re probably aware, embattled Rep. Denver Riggleman (R-VA05) is facing a strong challenge in the VA05 GOP’s upcoming drive-thru convention at a church (nope, you can’t make this stuff up), astoundingly from even *further* to Riggleman’s (far) right, by Liberty University’s Bob Good. Why? As Roll Call reported, in naming Riggleman the fourth-most-vulnerable incumbent U.S. House member in the country:

“Riggleman became vulnerable when the 5th District’s Republican committee voted in November to have a nominating convention instead of a primary. The move could give extra weight to votes from religious conservatives on the committee who tried to censure the freshman lawmaker after he officiated a gay wedding. The nomination process has been thrown into question by the coronavirus pandemic.  Riggleman’s campaign was pushing to revert to a primary as a safer alternative. His opponent, former Liberty University athletics director Bob Good, told CQ Roll Call the party committee was planning a drive-thru convention in the parking lot of the church where Good happens to worship.”

And how has Riggleman responded to this? Predictably not well, as he lashes out at Good:

That’s just a flavor of the rhetoric we’re hearing these days in the vicious, nasty VA05 Republican nominating contest. Clearly, Riggleman is embattled, with his nomination quite possibly endangered. So it makes sense for Riggleman to rally the (far) right, by touting support from right-wingnut allies. But you’d think that there might be some right-wingnut allies that even embattled Riggleman wouldn’t want publicly supporting him at this point. For instance…

Conservative Virginia political blog Bearing Drift has the scoop: “a robocall of Rep. Jim Jordan (R-OH), founding member of the Freedom Caucus, formally endorsing Rep. Denver Riggleman in front of the 5th District Convention.” Click here or below to listen to the audio, in which Jordan calls Riggleman his “dear friend,” calling himself one of a “list of strong conservatives who support Denver.”   problem with Jordan, of course, is this:

A college wrestling referee says he reported sexual misconduct involving a former doctor who’s been accused sexually abusing nearly 300 hundred men over a 17-year period to Rep. Jim Jordan (R-Ohio), a former assistant wrestling coach at Ohio State. The congressman was dismissive, according to a lawsuit filed Thursday in federal court, and the doctor, Richard Strauss, continued to treat and abuse students at the school.

Ohio State says it’s aware of 1,429 instances of fondling and 47 instances of rape involving Strauss, who committed suicide in 2005. Thursday’s filing marks the 13th lawsuit against the school.

Jordan has found himself at the periphery of the controversy because some former wrestlers have said he was aware — or should have been aware — of Strauss’s misconduct. Jordan has denied any knowledge of the abuse, and did so again on Friday.

The problem is, it’s almost *impossible* that Jordan didn’t know about the abuse going on all those years, given that:

So that’s “Gym” Jordan, the guy who has now endorsed Rep. Denver Riggleman (R-VA05) for reelection. And the sad thing is, given the current, warped state of the Republican Party, it might even help Riggleman. Unless it backfires, that is, by conservatives who are disgusted by the sordid scandal Jordan’s involved in…

P.S. Riggleman was just labeled “Somewhat Liberal” (!) by a far-right group. So maybe Riggleman really does need the former college wrestling coach’s help to get out of the “full nelson” he finds himself in? LOL 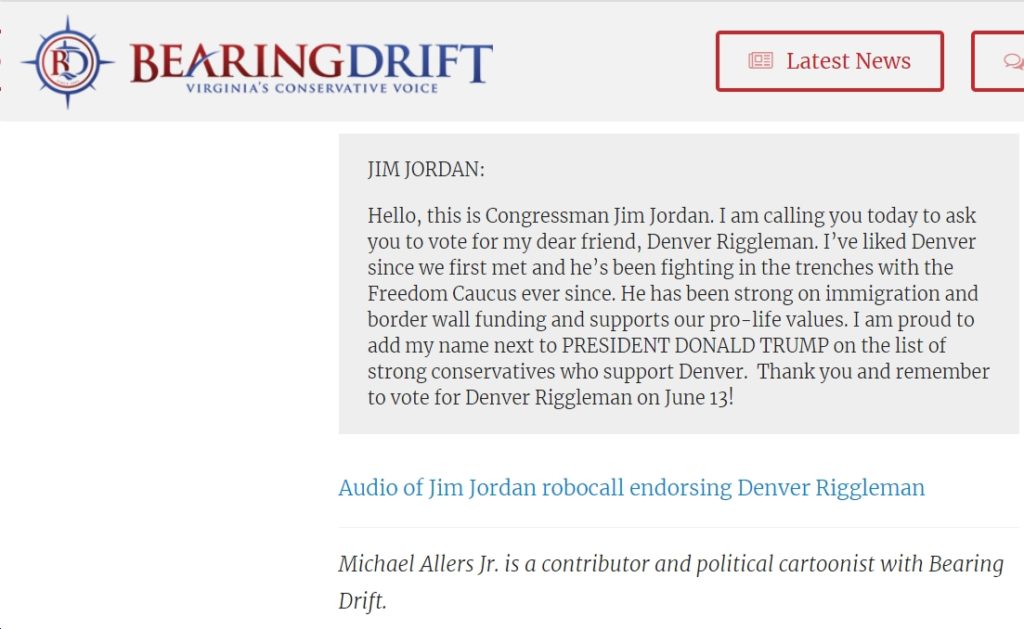