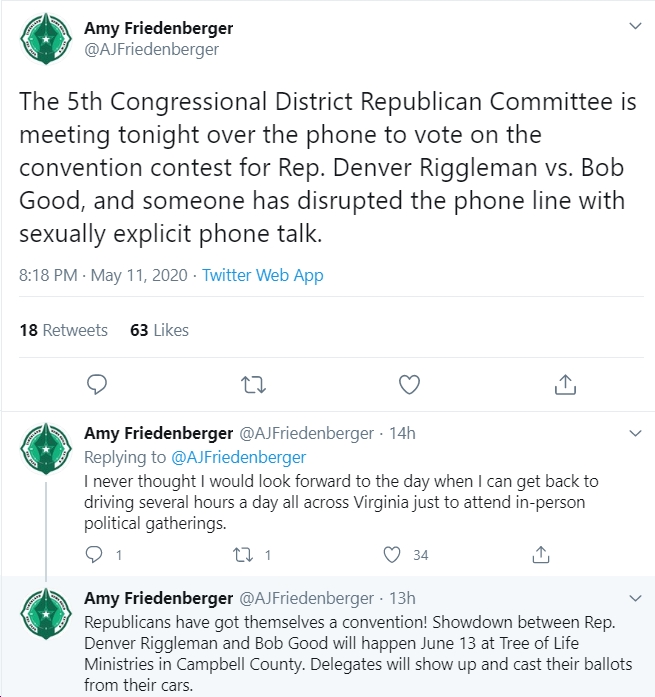 A week ago, Roll Call named Rep. Denver Riggleman (R-VA05) the fourth-most vulnerable incumbent U.S. House member in the country – “because of an intraparty challenge that has extra weight because of the way Republicans in his district will choose their nominee.” But wait, it gets better! LOL

“Riggleman became vulnerable when the 5th District’s Republican committee voted in November to have a nominating convention instead of a primary. The move could give extra weight to votes from religious conservatives on the committee who tried to censure the freshman lawmaker after he officiated a gay wedding. The nomination process has been thrown into question by the coronavirus pandemic.  Riggleman’s campaign was pushing to revert to a primary as a safer alternative. His opponent, former Liberty University athletics director Bob Good, told CQ Roll Call the party committee was planning a drive-thru convention in the parking lot of the church where Good happens to worship.”

Wait, what?!? A “drive-thru convention in the parking lot of the church where Good happens to worship?” That sounds super fair, huh? But they wouldn’t actually *do* that, right? Uhhh…yep, they sure would!  See above for a series of tweets, last night, by Roanoke Times reporter Amy Friedenberger, about the 5th CD GOP committee deciding on a convention at the “Tree of Life Ministries” in Lynchburg, which just so happens to be Good’s “home church.” Yep, that’s Republicans for you.

So how has Rep. Denver “Bigfoot Erotica” Riggleman responded to this latest news, which certainly seems to favor his even-more-far-right (if that’s even possible) opponent, Bob Good? See below for what he just posted on Facebook – clearly, he’s not happy!

From Denver Riggleman (bolding added by me for emphasis):

I hope you and your family are safe during this difficult time. Throughout my life, my mission has been to serve the people and fight corruption. As an Air Force Intelligence Officer, I fought corruption overseas in the Balkans, and as a businessman, I fought the onerous, job-killing regulations imposed by corrupt lobbyists at my home in Virginia. I got involved with politics because my family’s business was threatened and treated unfairly by these same corrupt lobbyists and insiders who attack businesses across the state.

I never thought I would have to fight corruption within the Republican party, but unfortunately, that is the case today. This is not the first time I have fought corruption, but I’m proud to lead the fight for transparency today.

As you know, my opponent’s campaign has engaged in voter intimidation through lawsuits targeting 5th District committee members. This is an unfathomable act that is anathema to what makes Virginia great. Recently, Tucker Carlson’s Daily Caller picked this story up and highlighted the voter intimidation that is happening right here in our district.

Bob Good’s corruption doesn’t stop there. Of the paltry $30,000 Bob Good raised for his congressional campaign last fundraising quarter, over 60% of those funds were spent paying Committee members to vote his way.

That’s right, Bob spent the majority of his campaign donations paying committee members to rig the election and limit your option to vote.

The same committee members being leveraged by Bob are the same political insiders who have been controlling Virginia’s smoke-filled rooms for years. This isn’t the first time these party insiders have tried to rig elections so that they could get rich—but it’s not going to happen on my watch.

Intimidating committee members and paying for votes is the definition of pay-to-play politics, something I have fought against my entire life. When Bob Good can’t intimidate committee members to vote his way, he then tries to pay them off. This blatant pay-for-play scheme goes against any semblance of a fair process and is against everything we stand for as Republicans.

I have always pledged on running a campaign of integrity and transparency. That’s why I have attached the FEC filings so you can judge for yourself on this matter. Both the committee members on Bob Goods payroll have voted on key decisions during this nomination process and have been put on special committees by the Chairman. One of these paid committee members even had their wife appointed to a special State Central Committee panel to decide the nomination process during the COVID crisis.

I have always appreciated your support and I want to thank you for sticking with me through this unnecessarily nasty nomination fight. When politicians like Bob Good try to gain power, they will do anything they can to win, even if it’s immoral and unethical.

Of course we already know how Riggleman felt about this situation. For instance, in this interview last week on right-wing talk radio, an irate Riggleman threw around words like “fraudulent,” “do you really believe that we should disenfranchise what 99.9% of voters,” “they’ll do anything to win,” “mind-boggling,” “graft,” “corruption in the backroom,” “pay-to-play,” “I will not stand for it,” “appalling,” “crap,” etc. Great stuff, huh? I mean, from a Democratic perspective, it’s really hot-buttered popcorn time, as the 5th CD GOP tears itself apart, descends into vitriol and bitterness, and reduces their chances of holding this seat in November.

“The Republican primary has become a mess of threats, lawsuits, and hypocrisy. At the heart of this is the Republican Party’s obsession with influencing the process and its inability to place the choice in the hands of voters. It’s sad to see.”

“It’s good to see that they’ve finally decided on a process to select their nominee. The reality is that I’m focused on our Democratic primary and not the ins and outs of Republican Party politics here in the 5th. That said, you can’t help but notice all of the acrimony and bickering to get them to even this point—and the stark contrast that is with our process, our forums and our contested primary among Democrats in the 5th. Virginians want more of the common sense, the collegiality, and the focus on issues, vision and solutions, and less of the bickering, back-biting, and name-calling that defines dysfunctional politics and dysfunctional politicians. We’re in a moment when we have to be at our best working together in government, and they’re just making the case that this district won’t be optimally represented by either of them.”