You’d think that someone who is FAR less popular in Virginia than the state’s governor, Ralph Northam; who has a pathetically bad net approval rating (36%-54%); and who’s getting crushed by Joe Biden (51%-39%) to boot; might be smart enough not to attack Gov. Northam, but…nope, we’re not talking about someone who’s smart here. Check it out, from a few minutes ago:

Utter idiocy, of course, as Trump has zero chance of winning Virginia this November. Z-E-R-O. For his part, Gov. Northam fired back at the man he correctly called a “narcissistic maniac” back in the 2017 gubernatorial campaign:

“I grew up on a Virginia farm, Mr. President – our potatoes are fine. And as the only medical doctor among our nation’s governors, I suggest you stop taking hydroxychloroquine. Let’s all get back to work.”

Haha, how about *them* potatoes, “President” Trump? LOL 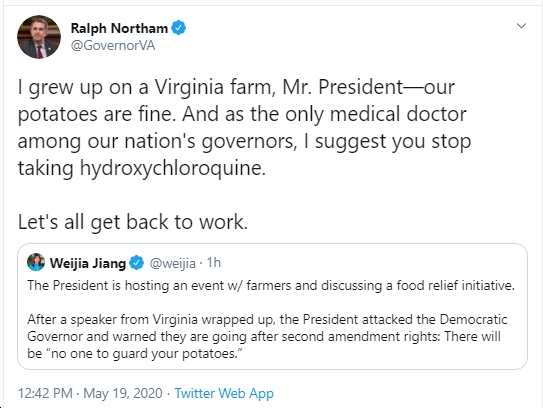