With the 2020 “Reconvene” session completed, Gov. Northam now has until May 22 to sign or veto the following bills, including five (SB215, SB235, SB251, SB861, HB795) that rejected his amendments, along with three others (SB2, SB891, HB972). See below the screenshot of @VACapitolSquare’s tweet for more information on these bills. 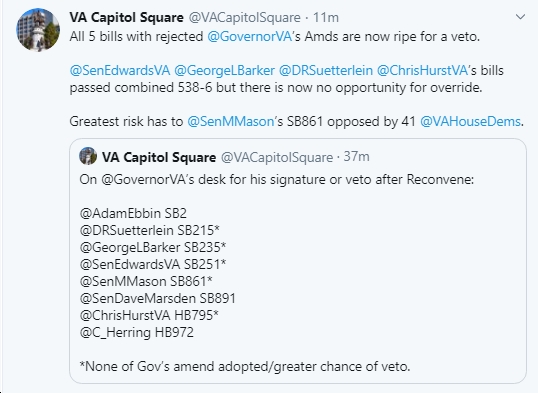 #Wednesday News: “Vaccines Promised for All US Adults By the End of May”; “Senate to move forward on [$1.9t] virus relief bill”; “Tanden withdraws from nomination”; “The White House and Congress must beat back attacks on voting rights”; RIP Vernon Jordan https://bluevirginia.us/2021/03/wednesday-news-vaccines-promised-for-all-u-s-adults-by-the-end-of-may-senate-to-move-forward-on-1-9-trillion-virus-relief-bill-tanden-withdraws-from-nomination-as-biden-budget-chief