See below for statements from Virginia members of Congress to Trump’s comments yesterday. As Rep. Abigail Spanberger (D-VA07) says, Trump is “betraying the very foundation of the rule of law he purports to support — the U.S. Constitution.” Other reactions include phrases like: “the actions of a dicator – not an American President”; “naked authoritarianism”; “clear and present danger to the rule of law,” etc.

“After a week of mourning in America, as we contend with the deaths of more than 100,000 Americans to COVID-19 and yet another horrific killing of an unarmed black man, our country is desperate for presidential leadership.

“Yet, rather than taking steps to unite our anguished country, President Trump is now threatening to deploy deadly military force — in violation of states’ rights — to cities across the country to ‘dominate’ protestors. If there were any doubt that the President’s intentions are not meant to unite, but rather to divide, disorient, and demonstrate power, we need look no further than to the fact that the President then ordered tear gas and rubber bullets fired at peaceful protestors and members of the free press for the sake of a photo op.

“This is an abject failure of presidential leadership, an incendiary act of division, an escalation of tensions, and the type of actions undertaken by authoritarian regimes throughout the world. As a former CIA officer, I know this playbook, and I know the President’s actions are betraying the very foundation of the rule of law he purports to support — the U.S. Constitution.” 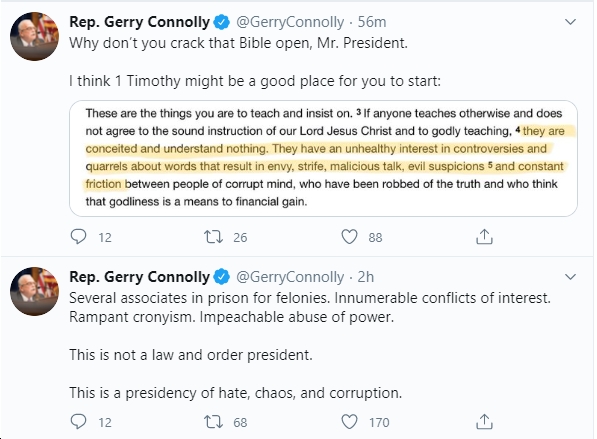 June 1, 2020 (Washington, D.C.) – U.S. Representative Don Beyer (D-VA), who represents the Northern Virginia suburbs of the nation’s capital in Congress, issued the following statement this evening on the violent police attacks against peaceful protesters outside the White House:

“Trump’s actions tonight are not law and order, they are naked authoritarianism.

“Unleashing state violence against peaceful American demonstrators and journalists to create a photo op is a violation of the President’s oath to defend the Constitution and a betrayal of everything this country stands for.

“Every American looking on in horror tonight at the uniformed officers who are paid with their tax dollars beating and gassing innocent people should consider that Trump wants this scene repeated in cities across the country. He is a clear and present danger to the rule of law.

“If Trump had devoted a fraction of the focus he has given to encouraging violence against American citizens while dealing with the COVID-19 pandemic that has killed over 100,000 people, thousands more might still be alive today. He is endangering American lives in more ways than we can count, and the damage his failed presidency has done to our country will haunt us for years to come.

“I do not know how those who sanctioned and authorized the violent reprisals he ordered can square their actions with the Constitution or with their consciences. The violence we have seen from authorities tonight is not right, good, or just, and it has no place in the United States of America.”

McEachin Condems Use of Tear Gas Against Peaceful, Law-Abiding Protestors in Richmond and Washington, DC

RICHMOND, VA – Congressman A. Donald McEachin (VA-04) today issued the following statement regarding the unwarranted use of tear gas to dispel peaceful protests in Richmond, VA and Washington, DC.

“Non-violent resistance to demand better from our government is a pillar of our democracy that must be protected and valued at all costs.

“American citizens exercising their Constitutional rights – among them freedom of speech and assembly – is law and order. We cannot ask protesters to make themselves heard in a peaceful, constructive way, then tear gas them while they are lawfully assembled.

“Whether in Richmond, VA or Washington, DC, or anywhere in our nation, there is no justification for the use of tear gas against citizens engaging in a peaceful protest, obeying the law.

“It is alarmingly authoritarian, un-American and utterly unacceptable.”