See below for some reactions from Virginia elected officials to this morning’s historic Supreme Court decision on the DACA program/DREAM Act. 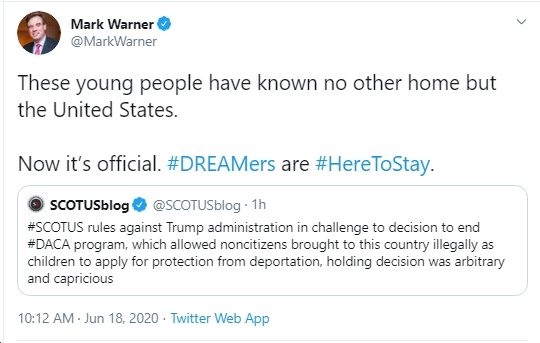 “President Trump’s decision to end DACA plunged hundreds of thousands of innocent young people into legal limbo and wreaked havoc upon nearly every area of American life. I’m so thankful the Court has put an end to this Administration’s ill-conceived broken promise. Congress should now pass the HEROES Act to prevent the deportation of undocumented essential workers during the pandemic and the American Dream and Promise Act to permanently protect these kids and young adults.”

Dreamers and #DACA are here to stay, and we are better off for it. https://t.co/hqX5nxq8wS

DACA recipients have built their lives in this country and in this Commonwealth. They make us better—and they are here to stay. https://t.co/ezv3fFLDQl 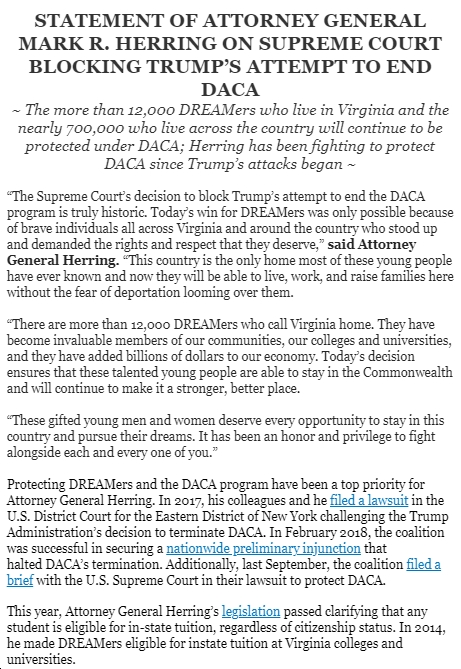 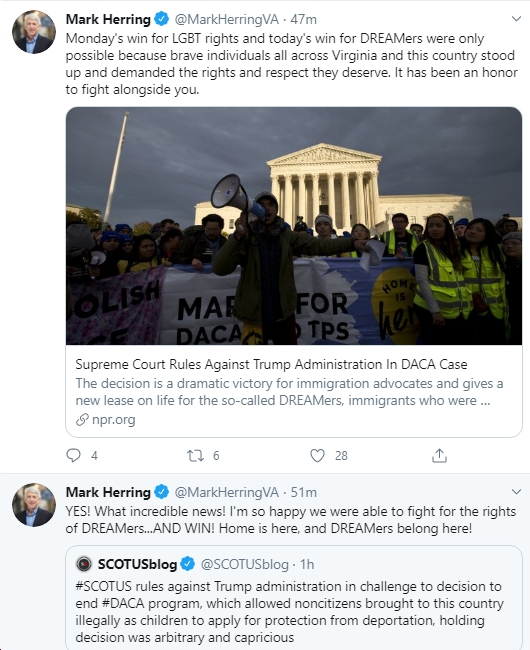 A great day for the United States.

Dreamers are Americans. They belong here.

Very glad the Supreme Court sided with them, though the urgent need for Congress to pass humane immigration reform remains.

Also, if Trump had a personal motto it would be “Arbitrary and Capricious.” https://t.co/oKbb414JI0

This is excellent news for Dreamers all across the country. #HeretoStay https://t.co/p2Q4cWjjxq

WASHINGTON, D.C. – Rep. A. Donald McEachin (VA-04) issued the following statement regarding the Supreme Court ruling that the Trump administration failed to provide an adequate reason to justify ending the DACA program:

“When President Obama announced the DACA program seven years ago, he made a promise to over 700,000 young people brought to our country as children with hope for a brighter future — that if they would be provided  chance to build a future in the United States.

Under the cruel immigration policies  and looming threat of rescinding DACA posed by the Trump Administration, those DREAMers have lived and worked in the United States, making meaningful contributions to our hospitals, schools and communities.

Today’s Supreme Court ruling re-affirms the truth that discrimination and xenophobia have no place in America. DREAMers are our neighbors, our friends and in every way that matters most, they are American. They deserve a legal path to full citizenship in the only country they call home.

“This is a tremendous victory for Dreamers and for the immigrant rights movement! The Supreme Court has made clear that no one is above the law and that this president may not cut corners in pursuit of his ugly and wrongheaded anti-immigrant policies. I am thrilled for every young person in my community and across the country who will be able to work, study, and live in peace in the country they call home.

I call on DHS to begin accepting and processing new DACA applications IMMEDIATELY in order to open back up the doors to work authorization for thousands of deserving young men and women who have been stuck in limbo because of this administration. This great victory is one to celebrate, but we also cannot forget that as long as this president is in the White House, he remains a threat to immigrants, New Americans, and their loved ones in every corner of the country. America is strongest when we are a place that lifts everyone up and leaves no one behind—and that’s why I’m committed to making Donald Trump a one-term president.”