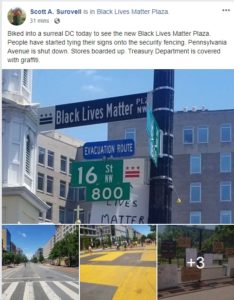 For well over a week, since the horrific murder of George Floyd, protesters who believe that Black Lives Matter, and who oppose racial inequity and police violence, have been marching across the country, including in the nation’s capital, Washington, DC.  Trump was so terrified of these overwhelmingly peaceful protesters, in fact, that he scurried into a bunker and turned off the lights at the White House. That is, when he and his lawless Attorney General, Bill Barr, weren’t busy driving those peaceful protesters away – with tear gas, police batons, etc. – for Trump to pose in front of a church for a propaganda event, with a bible in hand, no less.

Judging just how many have been out in the streets isn’t easy and, with all the political implications and controversies surrounding crowd sizes, “professional'” counting from the U.S. Park Service ended long ago.

Still, Saturday’s crowd appeared very large. Going into town, we saw hundreds (maybe even thousands) heading back into Virginia. While pausing at Constitution Ave, looking at the White House, it was impossible to see the start and end of the march as thousands passed before us.

Of course, Constitution Avenue wasn’t the only place where Americans gathered to exercise their First Amendment rights of “freedom of speech” and “the right of the people peaceably to assemble, and to petition the government for a redress of grievances”.

Downtown Washington is one giant protest zone right now, crisscrossed with a multitude of marches—some organized, others the result of an on-the-spot call to walk.

Thousands are moving through Foggy Bottom chanting “prosecute the police” and unswayed by the summer-like heat. pic.twitter.com/Xs27H357BK

In semi-connected pockets, large crowds and demonstrations were going on.

The BLM Plaza area (H Street and 16th Street) was packed with who knows how many 1,000s of people.

ENORMOUS demonstration in progress on 16th Street and #BlackLivesMatterPlaza from Scott Circle to the White House @WTOP pic.twitter.com/d83myA2psb

“WTOP’s Alejandro Alvarez described Downtown D.C. at 2 p.m. as “one giant protest zone,” with a number of marches and gatherings happening in different areas of the city.”

So, yes, it was hard to judge (especially from a ground perspective) just how many people were on the streets Saturday in D.C. But having been around for more than a few marches in my lifetime, a 100,000-200,000+ “count” seems to be roughly the ballpark.

The 16th Street corridor is buzzing with music and chanting tonight, with the drum circle still going strong and the go-go truck now parked within earshot of the White House.

A lone violinist is playing beneath a black lives matter banner pinned to the fence at Lafayette. pic.twitter.com/0NskJrDg18

With that in mind, I found it disconcerting to have the banner headline of Sunday’s Washington Post read “Thousands throng D.C.,” with the article‘s opening words asserting, “more than 10,000 people poured into the nation’s capital.”

Sure, there were “thousands” who thronged and, yes, there were “more than 10,000 people” who “poured into the nation’s capital” But…while technically accurate, there is no question that this is not a fully truthful account of the reality of Saturday’s protests.

Of course, a photo is worth a thousand words.  Consider the half-page photo Post editors published with the article. While Matt McClain’s photo is excellent in many ways, this isolated trio certainly doesn’t give a sense of the protester numbers and the crowds all over “official” DC.

In fact, this is yet another example of how the media’s choices – large and small, in words and imagery – can very much impact public perception and drive “narrative” and discourse.

The bottom line is that there was a very, very large number of people – I’m thinking on the order of 100,000-200,000 – out protesting in Washington, DC on Saturday. Yet, if you only read The Washington Post‘s coverage, you might end up thinking there wasn’t even the number of people who would go see a Capitals’ hockey game. Also, based on Washington Post editorial choices, you might think that Trump was somehow (miraculously) truthful in tweeting out about “smaller crowds than expected” Saturday.

Consider: if the Washington Post’s reporting had opened with the words, “more than one person protested,” it would have been technically accurate, but clearly would have jumped out as not truthful. The “thousands” banner headline and “more than 10,000” opening words the Post ended up using were, sad to say, only marginally better.

Maps of VA Elections From 2001 to 2021 Show Democratic Collapse in Rural Areas. The Question Is Why – and What Might Be Done...