Another Confederate statue in Richmond has, at long last, been removed. This time, it’s the state of  Matthew Fontaine Maury, “a Virginian [who] resigned his commission as a US Navy commander and joined the Confederacy.” Or, as Richmond Mayor Levar Stoney describes him (see below), a “confederate naval commander.” Of course, as Mayor Stoney points out, removing these “symbols of injustice” is only part of the work to “transform systems built on that same hateful foundation,” but it’s certainly a welcome move towards achieving that goal. 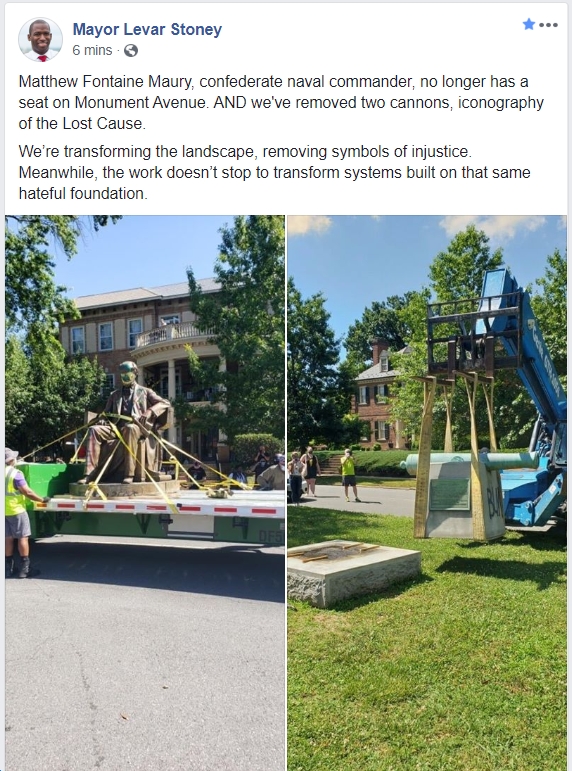 The Matthew Fontaine Maury statue has been removed from its base. The monument titled after Maury’s nickname “Pathfinder of the Seas” was unveiled in Richmond in 1929 and sits at Monument and Belmont avenues. @8NEWS #RVA pic.twitter.com/uMT1aG8K4G

The Maury statue is now on the flat bed. @myVPM pic.twitter.com/iN832M7J2s

Forklift rolling up to the Maury statue on Monument Ave this morning. Work crews have been trickling in for the last hour or so. Looks like Maury is up next for removal! @RTDNEWS pic.twitter.com/fCR31Js5da

Donald Trump: "you know what disappoints me about Youngkin?... he was not doing very well but he was inching up...he ran against a sleazebag who I knew very well, Terry...[Youngkin] got elected because of me, just like Ron DeSantis...but even more so" https://bluevirginia.us/2023/02/thursday-news-biden-and-mccarthy-hold-first-good-meeting-on-debt-ceiling-but-no-agreements-no-promises-the-gop-is-just-obnoxious-its-why-they#comment-6105606674