Back in June, Del. Elizabeth Guzman (D-HD31) announced that she was “exploring” a candidacy for Lieutenant Governor of Virginia in 2021, with a potential Labor Day launch. I interviewed Del. Guzman at the time; she emphasized that she would be “become the first Latina, the first woman” Lt. Governor of Virginia; talked about her accomplishments; and said “I will make my case to voters…that I have worked really hard to earn this promotion.” Now, Del. Guzman has formally announced her candidates for Lt. Governor of Virginia in 2021, arguing, “I’m running for Lieutenant Governor because the Senate needs a progressive voice,” adding that “the Senate needs a fighter for workers so that everyone – no matter who you are or where you’re from – can find their American Dream.” Guzman also notes that she was “co-chair of Bernie Sanders’ campaign in Virginia and now serves on Joe Biden’s National Latino Leadership Council, with “her current focus…on helping Biden and Kamala Harris defeat Donald Trump, so a more formal campaign launch is planned for November.”

Currently, by the way, VPAP lists Del. Hala Ayala, Paul Goldman and Xavier Warren as Democratic 2021 LG candidates; also, see here for a (long) list of actual/potential candidates (at this point, I’d remove Nick Rathod’s name, as it sounds like he’s not running after all; I’d also move Del. Sam Rasoul up a notch to “strongly rumored as likely candidates”). And with that…here’s Del. Guzman’s announcement.

“I’m running for Lieutenant Governor because the Senate needs a progressive voice,” said Guzman, who would be the first woman and first Latinx person to serve in that position. “I came to this country as a 25-year-old single mother with $300 to my name, and I had to work three minimum wage jobs with no health care and no paid sick days just to afford a one-bedroom apartment. But my struggle is not unique to immigrants, and millions of Virginia families are living paycheck to paycheck, just barely getting by. Over a million people alone do not have any paid sick leave. The pandemic has only made things worse, especially for our frontline workers and communities of color. Virginia is ranked #1 for business but last for workers, and the Senate needs a fighter for workers so that everyone – no matter who you are or where you’re from – can find their American Dream.”

Guzman is a social worker and public administrator with two master’s degrees and a 17-year career in human services. She is a union member and division chief for the City of Alexandria’s Center for Adult Services, where she oversees a $20 million budget for a 200-person staff serving some of our most vulnerable populations, including the elderly and people struggling with addiction. She is a former employee of Fairfax County Public Schools and the Fairfax County Office for Children. She has also worked to prevent child abuse as a court-appointed special advocate (CASA).

Guzman was the co-chair of Bernie Sanders’ campaign in Virginia and now serves on Joe Biden’s National Latino Leadership Council. Her current focus is on helping Biden and Kamala Harris defeat Donald Trump, so a more formal campaign launch is planned for November.

Guzman and her husband Carlos have lived in Virginia for over two decades. They reside in Dale City with her mother and the couple’s four children. 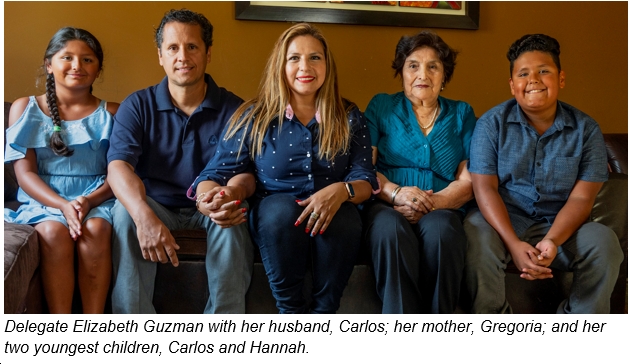 Guzman said, “I see the role of lieutenant governor as a promotion for a successful legislator, and I will make my case to voters that I have earned that promotion.”

Her key accomplishments include:

Paid for and Authorized by Elizabeth Guzman for Virginia