~ On Fairfax Commonwealth’s Attorney charges against the U.S. Park Police officers involved in the 2017 shooting death of Bijan Ghaisar ~

“As we near three years since two National Park Police officers tragically shot and killed Bijan, it is long past time for the Ghaisars to receive answers about what happened to their son and brother that night.”

In January of 2018, Sen. Warner, along with Sen. Tim Kaine (D-VA) and Rep. Don Beyer (D-VA), pushed the FBI for an update on the status of its investigation into the fatal 2017 shooting. In October of that year, Sen. Warner sent a letter to the head of the National Park Service (NPS) regarding the circumstances under which U.S. Park Police officers engaged with Mr. Ghaisar.

In June of 2019, Sen. Warner along with Sen. Chuck Grassley (R-IA) decried the opaque and drawn-out nature of the review in letters to both the FBI and NPS. Two months later, the FBI provided a brief response, leaving many questions unanswered. In October, NPS provided a partial response, which prompted a follow-up letter from the Senators seeking more information.

In November 2019, the Senators pledged to seek greater transparency and formally requested an FBI briefing on its investigation into the shooting – shortly after the FBI concluded its lengthy investigation without fully explain its findings, including why the two officers opened fire on Ghaisar. In February 2020, Sen. Warner voted against the nomination of Katharine MacGregor to be Deputy Secretary of the Interior, and in May, announced that he would place a hold on future Department of the Interior nominees until he receives adequate responses to his questions surrounding the Park Service’s handling of the shooting. In July, Sen. Warner pressed NPS for answers regarding its internal affairs investigation into the killing of Mr. Ghaisar, and the following month, he joined Sen. Grassley in a letter expressing concern over the department’s refusal to answer a number of questions in a briefing.

“Bijan Ghaisar was an individual that was involved in a minor traffic accident and was shot and killed by law enforcement minutes later. On a relatively uneventful night in 2017, Bijan was struck by another car, left the scene, and thereafter failed to pull over for U.S. Park Police—none of that should have led to his death. It left a family with a great loss and a community with a lot of unanswered questions. Today, we move a step closer to answers.

I’m announcing that the Fairfax County Commonwealth’s Attorney Office has secured indictments against the two federal officers who shot and killed Bijan Ghaisar. Each officer was indicted separately for one count of manslaughter and one count of reckless discharge of a firearm. Over the last few months, a special grand jury was planned for and convened at my request for the sole purpose of investigating this matter. Jurors from our community met on a number of occasions to review evidence and have returned the indictments I’ve sought. This result comes after months of intensive investigative work done by my office. My thanks to the FCPD and FBI for their assistance. Special recognition is due to Deputy Commonwealth’s Attorney Kyle Manikas and Senior Assistant Commonwealth’s Attorney Matt Lowery for their tireless work in securing these indictments.

Like so many others in our community, I was deeply disturbed by the images we saw on that cruiser video. That’s why I made sure that we took a clear and critical look at this case and made sure we did the right thing. I know so many members of the community, the media, and our elected officials have been inquiring about this case for many months. I appreciate their passion and thank them for their patience. I also thank the Ghaisar family for their patience, compassion, and understanding through an unimaginably terrible time. As a community, it’s difficult for a process like this to occur without regular updates, but I ultimately decided to pursue this under a sealed special grand jury to provide a total review of the evidence at hand while being mindful of the challenges we faced.

I wish this could have been done in a faster fashion. However, there is no shortcut to justice. This is a very complex and nuanced case. The pursuit of these indictments involved the careful review over 11,000 pieces of documentary evidence, the chasing down of additional evidence, and the conducting of in-person interviews and discussions in the midst of a global pandemic. Making this more difficult was the U.S. Department of Justice’s refusal to produce witnesses for the benefit of our grand jury and trial. Without our ability to call those witnesses it rendered their investigation and the valuable evidence they collected unusable at trial. To move this case forward we had to rely purely on evidence collected by the FCPD. To that end, I want to specifically thank Police Chief Ed Roessler as well as all the officers that responded that evening and subsequently handled the investigation of this case—because of your efforts you gave us the foundation necessary to get us to today’s result.

Justice has not yet come for the Ghaisar family, but today is a major step forward in that journey. That journey has a number of steps to go.

Because the defendants are federal officers, I fully anticipate that they will file motions to remove this matter to federal court within the next 30 days. In turn, I also expect the federal government will move to dismiss this case on the grounds of the Supremacy Clause. Because of these unique challenges, we’ve not only prepared for these indictments, we’ve also spent months preparing for trial. As I stand before you, I know we are ready to try this case tomorrow. The level of preparation that’s called for in this case cannot be done in six weeks—it cannot be done in six months. If you are committed to more than just an indictment you need to put in the work.

When this incident happened, it shook our community and the reverberations were felt far and wide because of the disturbing video that we’ve all seen. We live in an age when justice does not happen in a vacuum. Cameras are everywhere and sometimes capture very troubling images. When a case is as widely reported as this one with a video that depicts an unsettling act, our community will certainly demand action.

Look around our country right now and it’s clear that many of our neighbors have lost faith in our criminal justice system. That loss of faith is because of systemic failures. We all know our system needs reform and that our laws are often times too narrow and very particular. When that happens it leaves us with laws on the books that don’t accord with the values in our hearts. We were fortunate enough that our community’s values and laws saw eye to eye today. Unfortunately, the fact that it doesn’t always play out that way remains a real problem. Let’s never forget that we have the power to change that. When we demand better of our elected officials and demand that our laws reflect our values you will see better and better outcomes like we did today.” 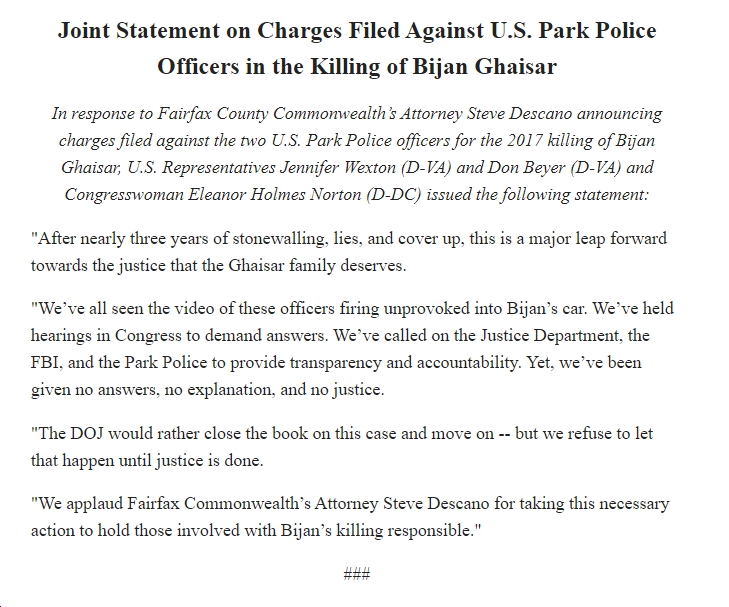