This election day, according to the Virginia Department of Elections, 54.1% of Virginia voters chose Joe Biden as their next president, while just 44.0% selected Donald Trump. So that’s a greater-than-10-point lead among Virginia *voters*. But how about if you look at Virginia jurisdictions by economic output? We’ll get to that in a second. But first, how about nationally? According to this report by Brookings, looking at the entire country, “Biden’s winning base in 477 counties encompasses fully 70% of America’s economic activity, while Trump’s losing base of 2,497 counties represents just 29% of the economy.” That’s really striking; as Brooking’s put it:

“Biden captured virtually all of the counties with the biggest economies in the country (depicted by the largest blue tiles in the nearby graphic), including flipping the few that Clinton did not win in 2016...Blue and red America reflect two very different economies: one oriented to diverse, often college-educated workers in professional and digital services occupations, and the other whiter, less-educated, and more dependent on ‘traditional’ industries.”

What about specifically here in Virginia? Did that same pattern hold? The U.S. Bureau of Economic Analysis has data tables for state economic output (GDP) by county/city. Here are the results (for 2018; “chained 2012 dollars”). 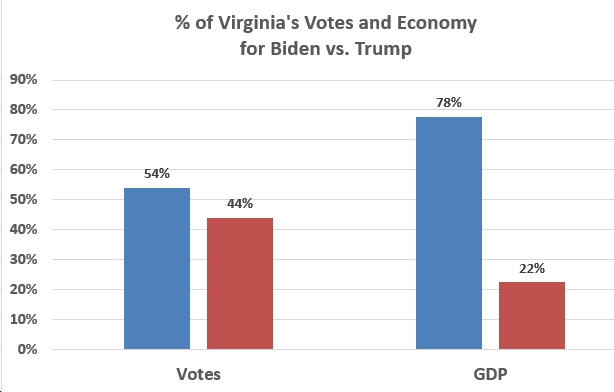 US House Votes for Continuing Resolution to Keep Government Open; All Virginia Dems Vote Yes, All Virginia Rs Vote to Shut Down the Government https://bluevirginia.us/2022/09/us-house-votes-for-continuing-resolution-to-keep-government-open-all-virginia-dems-vote-yes-all-virginia-rs-vote-to-shut-down-the-government

We'll see shortly, but given how extreme they are, it's highly likely the four Virginia Rs voted to shut down the government. Do NOT put these anti-government nihilists in charge! https://bluevirginia.us/2022/09/friday-news-what-if-were-already-fighting-the-third-world-war-with-russia-corrupt-trump-appointed-judge-bails-trump-out-of-special-master-plan-gop-war-on-student-debt-forgiveness-begin#comment-6000203110 h/t @RepDonBeyer