Among the numerous candidates for “worst member of Congress” and “worst American,” Sen. Lindsey Graham (R-SC) has got to be on one if not both lists. I mean, this is the same clown who says Stacey Abrams ‘conned’ Georgia GOP into helping Biden win (WTF???), who made “a phone call…to Georgia Secretary of State Brad Raffensperger to propose that Raffensperger invalidate thousands of mail-in ballots”; who has consistently defended Trump’s election disinformation campaign and attempts to subvert democracy; etc. So yeah, Graham’s among the worst of the worst…

With that in mind, check out Graham’s latest, in which he attacks the tiny Virginia city of Falls Church for – as Josh Israel of The American Independent reports – having “voted unanimously last week to rename Thomas Jefferson Elementary School and George Mason High School.” Graham’s reaction is predictably over the top:

“To those who wondered if it was a slippery slope when it comes to renaming public buildings for the imperfect people who helped shape America: you need to look no further than Falls Church, Virginia.  They have concluded that Thomas Jefferson, the primary author of the Declaration of Independence, our nation’s first Secretary of State, and the third President of the United States, is no longer worthy of having an elementary school named after him. America is the best hope of mankind. It is why we celebrate and honor the Founding Fathers of our nation. This effort by modern day liberals to purge America of its founding history is truly shameful.”

Yes, this is what Lindsey Graham is spending his time these days doing – attacking a town with a population of just 14,617 for deciding that it wants a couple of its schools to have different names. With a pandemic raging, with our democracy in peril, with so much else to focus on and to be upset about, THIS is what Lindsey Graham is focusing his wrath on. The question is why, and the answer seems pretty obvious – Graham is, at the least, pandering to racists among his supporters, by leaping to the defense of two slaveowners. It really shows where Graham’s head is at and where his priorities are… 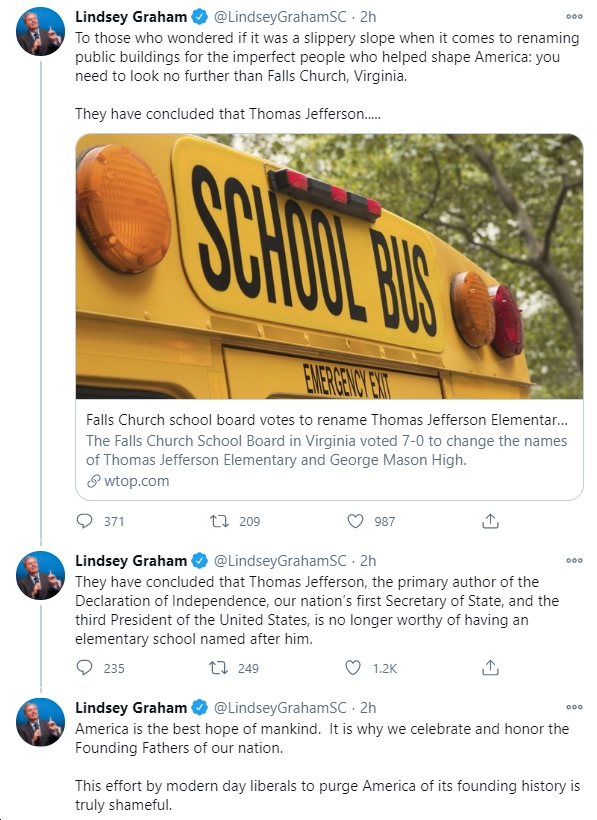 Youngkin gets savaged over at The Bulwark by a Republican and former George W. Bush staffer: "Youngkin is trying to have it both ways, and it will be entertaining and depressing to watch between now and November." https://bluevirginia.us/2021/08/audio-at-a-recent-campaign-event-youngkin-suggested-that-the-courts-could-reinstate-trump-into-office#comment-5479638934