UPDATE 3:29 pm: Now they’re finally voting on the underlying motion to nominate 2021 statewide candidates by convention. And the vote this time is 41-28.

UPDATE 3:24 pm: A motion to nominate candidates by convention is made. They vote 47-27 to end debate, which is not 2/3rds, so apparently debate is not ended.

UPDATE 3:21 pm: They just voted 28-42 to postpone the matter until December 12 at 7 pm. So the matter is NOT postponed – the “majority wishes to settle the matter today,” as Chairman Anderson says.

UPDATE 3:06 pm: Willie Deutsch motions to adopt the substitute, to hold a convention.

UPDATE 3:04 pm: OK, now they’re saying the underlying motion of whether or not to hold a convention is still before them.

UPDATE 3:00 pm: Brandon Jarvis tweets, “Side note: Hearing from several people that @kirkcoxforva  is pushing for a convention”

UPDATE 2:52 pm: Morton Blackwell says there’s a “large consensus” to holding an unassembled convention, and that clearly an assembled convention is feasible given the current circumstances. Now they’re debating whether they can have a “ladies and gentlemen’s agreement.”

UPDATE 2:40 pm: Jeffrey Adams argues that it’s very difficult to continue as a unified party if every decision gets “relitigated.”

UPDATE 2:37 pm: Jill Cook makes the point I’ve been making, that Democrats will have a very competitive primary in June for governor, so they’re not going to “crash” the VA GOP primary.

UPDATE 2:27 pm: Central Committee member Maricio Tamargo says he prefers a convention because of all the “fraud” going on. Of course, there is no “fraud” going on, but don’t try telling these folks…

UPDATE 2:22 pm: The committee is now moving to Paula Steiner’s motion to reconsider the earlier vote for a convention.

UPDATE 2:13 pm: Geary Higgins now talking about his desire to have a convention which is as inclusive as possible. Paula Steiner now offering a motion to reconsider the vote choosing a convention. On and on we go. Apparently that motion is “not in order.”

UPDATE 2:09 pm: The VA GOP dumpster fire resumes. As Brandon Jarvis tweets, “They are back from lunch break and the motion to delay the decision on the final structure of the nominating convention has been withdrawn. One member who was talking about withdrawing her vote says she is no longer considering that.”

UPDATE 1:35 pm: Back and forth we go, all kinds of disagreements on how to proceed, how much discussion is needed, etc, etc. Very messy. They adjourn for a 1/2-hour lunch break.

UPDATE 1:30 pm: A motion is made to postpone Geary Higgins’ motion for a statewide “firehouse primary” until the next Central Committee meeting.

UPDATE 1:25 pm: A motion to reconsider the vote to hold a convention is made, but now they’re arguing about procedure…

UPDATE 1:16 pm: Morton Blackwell argues that there needs to be serious discussion about a firehouse primary vs. a convention before a vote is taken. A motion to pass by Higgins’ motion indefinitely is made.

UPDATE 1:14 pm: Geary Higgins motions to strike convention and replace it with a statewide firehouse primary.

UPDATE 1:11 pm: The committee votes 39-35 to move to the substitute motion, to hold a convention.

UPDATE 12:51 pm: The committee now debating whether there should be a roll call or secret ballot vote on the question of whether or not to have a convention.

UPDATE 12:40 pm: Jeff Adams argues for a convention because he (falsely) claims the Attorney General is putting his thumb on the scale for Democrats.

UPDATE 12:38 pm: Linda Bartlett, from Fairfax County, that the only way to reach diverse voters in a place like Fairfax County is via a primary.

UPDATE 12:35 pm: Adela Bertoldi says she’s “always been a primary girl,” but this time she’s for a convention. She expresses concern that Democrats will vote in the GOP primary (which again, is really dumb, because Democrats have contested primaries for governor, LG and AG on the same day!).

UPDATE 12:30 pm: Another member argues that a primary will almost certainly result in a nominee who wins with a plurality, NOT a majority.

UPDATE 12:29 pm: One member (Ed Yensho) argues that we have an “out-of-control” governor and General Assembly, so that Republicans need to choose their nominees in a Republican-controlled process.

UPDATE 12:17 pm: A VA GOP State Central Committee member (Russ Wright) just claimed that Dems win by “fraud,” that Republicans can’t “out-fraud” Dems, and for those reasons Republicans should hold a convention, which they can control.

UPDATE 12:14 pm: Arguments for a primary are mostly about expanding the VA GOP’s reach to people whose support they’d need to win a general election, and that conventions exclude a lot of those people.

UPDATE 12:12 pm: Steve Troxel just made an argument for a convention, in part because of concerns that Democrats might vote in the VA GOP primary. Which is really dumb in general, but particularly in 2021, as the Democrats are going to have our own hotly contested gubernatorial, LG and AG primaries, so basically every Dem voter is going to opt for a Dem ballot in June.

UPDATE 12:07 pm: An argument was just made (by Mike Ginsberg) for a convention, with the concern being that a primary would result in the winner getting only 30% of the vote or whatever (since there’s no Ranked Choice Voting or Instant Runoff Voting), and that this would be very unhelpful to commanding the support of the breadth of the Republican Party.

UPDATE 12:04 pm: They’re finally moving into discussion/debate on the issue of method of nomination for 2021 statewide Republican candidates. A motion was made to have statewide primary elections, and another motion to have a convention to select statewide candidates.

Click here or below for video of the Republican Party of Virginia’s meeting today, which among other things will decide the crucial question of whether they’ll go with a primary or convention to choose their statewide nominees in 2021. Of course, it’s particularly crucial this time around, given Amanda Chase’s repeated threat/promise to run as an independent if the VA GOP selects a convention as their method of nomination. If that happened, it would all but guarantee that Democrats win the governor’s election next November, as it would split the Republican vote.

As of 11:35 am, they had spent a couple hours and had basically managed to have their invocation (during which they prayed for corrupt loser and delusional dictator-wannabe Donald Trump, lol) and to vote for party officers. Here are some highlights of those results, courtesy of @VACapitolSquare. 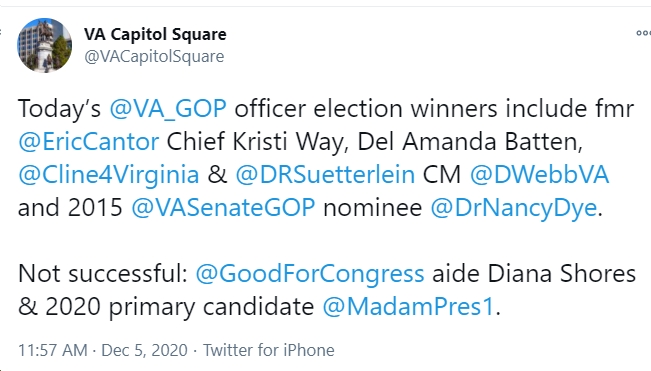 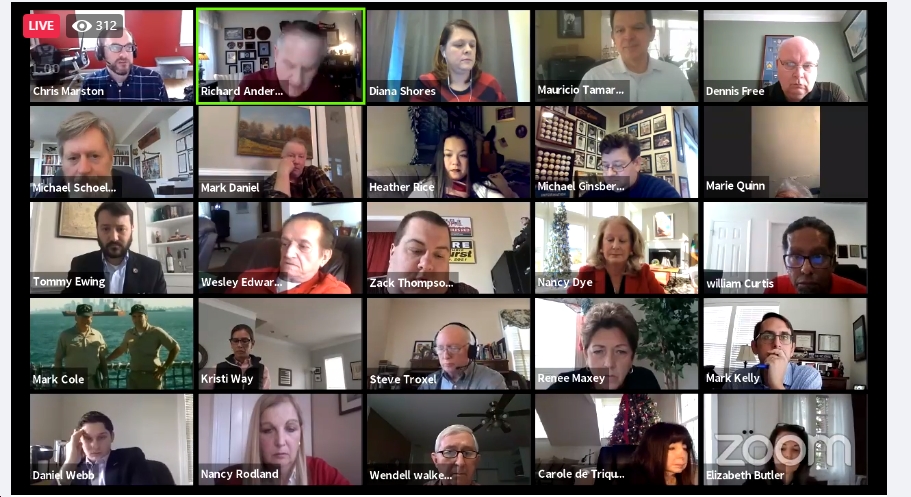