“…high turnout — combined with two redistricting legal victories at the end of the decade — proved favorable for the Democratic Party of Virginia. During the Trump era, Virginia Democrats won five elections for statewide office; flipped 21 seats in (and gained control of) the Virginia House of Delegates; gained two seats in (and control of) the Virginia Senate; and turned a 3-8 minority in the U.S. House of Representatives into a 7-4 majority.”

In contrast, back in 2013, while Democrats barely won the three statewide offices, the results were abysmal for House of Delegates. In 2014, it was a disaster across the country, while here in Virginia it was very bad as well, with Sen. Mark Warner coming within a whisker of losing reelection. Then, in 2015, we had another bad election for Democrats, this time for House of Delegates and State Senate. And in 2016, despite Hillary Clinton winning Virginia, the election generally sucked otherwise.

Sensing a pattern here? Pre-Trump, Virginia Democrats mostly turned out in presidential election years, with very low turnout in off/odd-year elections for the General Assembly, and not necessarily great turnout in “mid-terms” either. During the Trump presidency, Virginia Democrats turned out in droves, and as the saying goes, “when we vote, we win.” So…what’s next? Post-Trump, will turnout fall back closer to how it was pre-Trump? If so, will the dropoff in voter turnout be symmetrical between parties, or will one or the other see a greater dropoff? Whatever the answer is, it will have enormous implications in 2021 and beyond for: 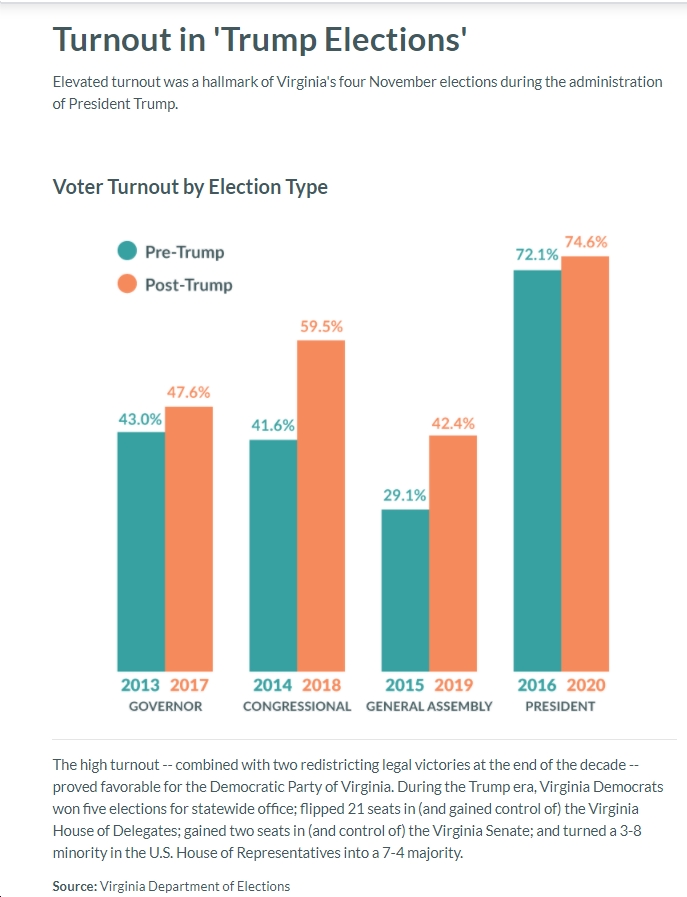