See below for a blow-by-blow account (courtesy of Brandon Jarvis and VAPLAN), as well as video, of what just took place in the Virginia State Senate, where Sen. Amanda Chase (R) faces possible censure for her words and actions leading up to the storming of the U.S. Capitol by a pro-Trump mob on 1/6/21. I’ll update this more later… 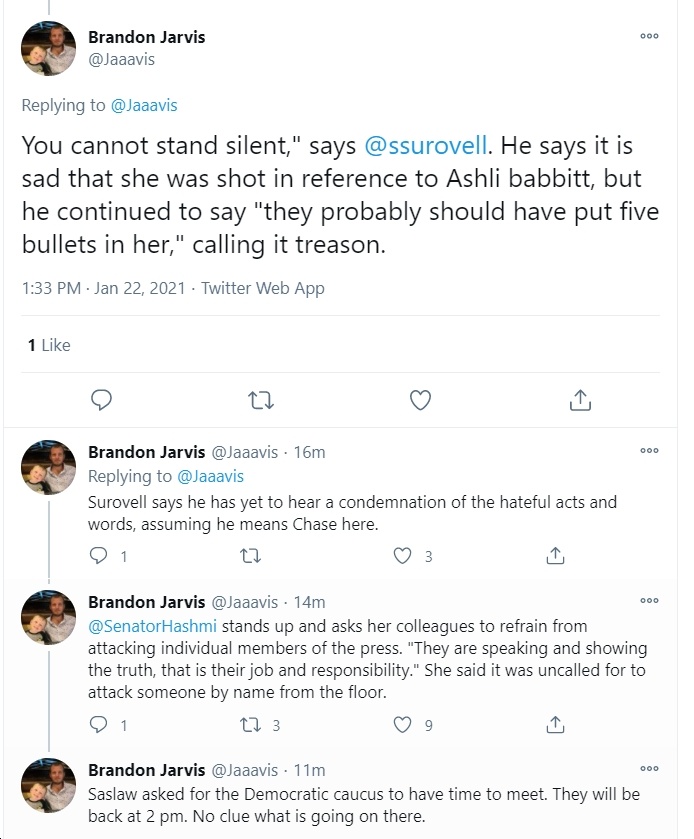 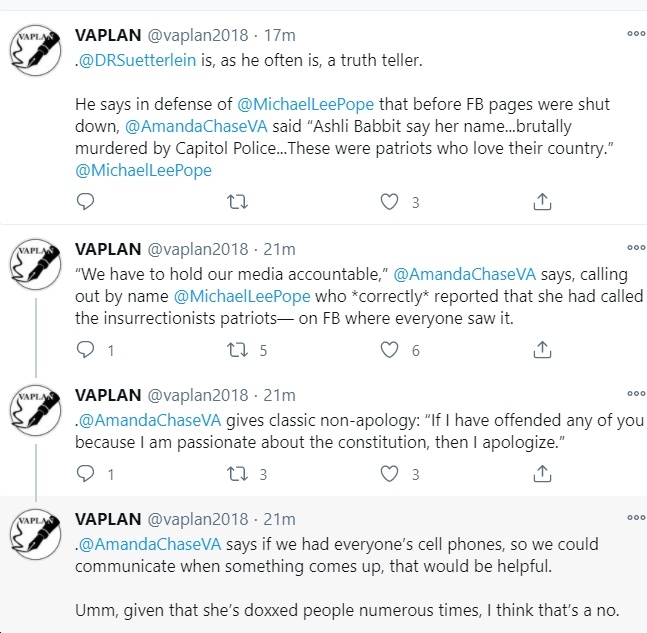 Sen. Suetterlein: “We’ve got to be careful when we use members of of the public or even the press, who actually have platforms in which they can speak from, when we speak from this floor and what we suggest that they said or did. And before [Amanda Chase’s] Facebook pages were shut down – and I don’t intend to speak to my thoughts on that because that would be a longer dissertation – but I would just point out that the senior Senator from Chesterfield in a post on Facebook similar to her remarks made on this floor last week, said quote Ashley Babbitt and this is when it’s very important, I’m quoting, these are not things that I would say and I disagree – quote ‘Ashley Babbitt say her name a veteran who was brutally murdered by Capitol police today.’ Words matter… I really appreciate what they do protecting our nation’s Capitol, and when you say that they brutally murdered someone, that’s something that requires a lot of reflection. And then further…in the exact same post that these were not rioters and looters, these were patriots who love their country and do not want to see our great republic turn into a socialist country. Well I certainly don’t want us to turn to a socialist country … but that’s not what the statement that was made on the floor last week, or what the statement that was posted on the internet said. And I think it’s unfair to malign the member of the press who simply quoted it…simply stating what was previously stated.”

Sen. Hashmi: “Mr. President, I know that there often exists a tension between members of the press and our body, elected officials throughout this country. This tension is normal, this tension is to be expected. But if you’re going to profess that you believe in the sacred quality of the Constitution, then I ask..all members to remember that one of the most sacred elements of our Constitution is the acknowledgement of the freedom of the press. It is the responsibility of the press to hold elected officials responsible for their words and their actions. Our free press it to be valued, it is not to be called out, it is certainly not to demeaned. And I would just ask our members to refrain from targeting individual members of the press who are practicing the craft and doing what they are responsible for doing. They are speaking and showing the truth; that is their job, that is their responsibility. And to attack them by name on the floor of the Senate I think is uncalled for.”

Sen. Surovell: “Mr. President, you know over the last year I got hooked on ancestry.com; I’ve been sort of poking around trying to figure out where i came from….my father’s side of the family…came from eastern Europe, they’re Jews from eastern Europe…the reason that they fled what was then Belarus and they fled Russia and Poland was because of the things that were going on in that country and those things got worse and worse and worse, and we all know eventually where all that led. …my great uncle Martin, he went back over…[to] find some of our family members from Bialystok where my grandmother’s family originally from, and they couldn’t find anybody because they’d basically all been wiped out. And you know when you when you think about how all that happened, I’ve heard some people analogize what happened a couple weeks ago to kristallnacht, which is the night of the broken glass. And at the time, a lot of people didn’t think it was a big deal when it was going on; there wasn’t a lot of condemnation…a lot of people looked aside, got used to it. And so for a lot of us, when we see people… defend…condone individuals who openly wear anti-semitic slogans on their chest, people who openly advocate or laud what happened during World War 2 in Europe, it brings back memories of kristallnacht and what happened back then. And it reminds some of us in this room that you cannot stand silent when those kinds of things happen. And when somebody applauds them, it carries a lot of meaning for a lot of people. Ashley Babbitt – I’m NOT going to say her name. It’s sad that she got a bullet put in her; that woman was coming through a window, which right on the other side of it were multiple congressmen. They probably should have put five bullets in her. I mean…what happened in that U.S. Capitol was disgusting, it was un-American, it was traitorous. And I have still haven’t heard a condemnation of it or the people who are inside. I still haven’t heard a condemnation of the things they were wearing. And so Mr. President, I would just say that yeah, words do matter and we need to be really careful about,,,what we say in public, on social media…in this chamber…We are elected officials and people out there look to us to lead them, and they look at us, the things we say validate and make them…okay….everything that’s been going on for the last four years has just reinforced that even more for me. And I really hope that as we work this out for the next couple months, we can all be a lot more careful about what we say.”