I’ve been meaning to write about the need for Ranked Choice Voting in Virginia, but it sort of slipped my mind, until the following tweets by Professor Larry Sabato on Friday reminded me about this issue. As Professor Sabato explains:

So lots of candidates is a good thing, right? I mean…sort of. On the Democratic side, it certainly does indicate that folks see a strong path to victory in increasingly “blue” Virginia – a state Republicans haven’t won since 2009, a streak they’re widely expected to continue this year as well. And on the Republican side…who knows exactly, but given that they haven’t had a statewide win in 12 years, they don’t really have anyone who can “clear the field,” so if you want to be the Republican nominee and have a 10% or 20% (or whatever) shot of being elected in November, maybe they figure “what the hell, why not give it a shot?”

So what’s the problem with having a ton of candidates to choose from? Professor Sabato hits on it with this tweet:

“Dems have June 8 primary, GOP has May 8 quasi-convention. Both could be messy. Turnout for Rs will be tiny compared to population. For Dems, VA no longer has a runoff and party doesn’t use ranked-choice voting, so GOV winner may only get 35% and LG nominee less than that.”

So on the Republican side, a relatively miniscule percentage of people who voted for Trump in 2020 will decide the VA GOP’s 2021 statewide nominees. But at least they’ll have Ranked Choice Voting, which means that to win, you have to get a majority of the vote, no matter how many candidates are running, and that you can’t win with 20%+ in a 5-person field, or 33%+ in a 3-person field, etc. Meanwhile, on the Democratic side, holding a primary means that a much larger number of voters can easily participate, which is great! BUT…the problem is that Virginia absurdly doesn’t allow Ranked Choice Voting for state-run elections. Which means that, for the Democratic nominations, the following percentages theoretically could win you the nomination:

As bad as it is that the Democratic nominee could be someone who receives just 12.51% of the vote (for LG) or 20.01% of the vote (for governor), imagine if the other 87.49% (for LG) or 79.99% (for governor) of Democratic primary voters really dislike the candidate who wins the Democratic nomination, for whatever reasons? That, obviously, would be a really bad and unrepresentative/undemocratic outcome. And yet…it could happen in our current system of “first past the post.” Or, what if the winning Democratic candidate for governor gets 35% or whatever, and the remaining 65% of Democratic primary voters are – to varying degrees – not thrilled with that outcome? That’s not a great outcome either, right? Or for LG, let’s say someone is nominated with 25% of the vote, which is absolutely a possible outcome, and if the other 75% of voters aren’t thrilled with that? Again, that doesn’t seem great to me at all.

The frustrating thing is that these types of sub-optimal, un-democratic outcomes could be avoided, easily, if Virginia would just allow Ranked Choice Voting for state-run elections. But to date, there’s been basically no serious move to do so. Why not? From what I’ve heard, it’s mostly an incumbent protection issue, given that Ranked Choice Voting is seen as potentially hurting incumbents (or de facto incumbents), who are almost certain to survive challenges from *multiple* candidates (who split the anti-incumbent vote amongst themselves, while the incumbent can win with 40% or whatever), but who could certainly lose if there’s Ranked Choice Voting (in which case the anti-incumbent voters could pick Challenger A as their first choice and Challenger B as their second choice, so when votes are reallocated, when either “A” or “B” is eliminated, the other one can get their second-place votes and win). Here are just a few examples from recent years to illustrate the point.

So you can see why incumbents could have an incentive to avoid instituting Ranked Choice Voting. Which might help explain why, despite two sessions with a Democratic “trifecta” here in Virginia, there’s been no serious move to at least provide Ranked Choice Voting as an *option* for state-run primaries. And that, I’d argue, is a huge mistake.

P.S. In the Democratic gubernatorial nomination, *many* people have noted that former Gov. Terry McAuliffe is the de facto incumbent in the race, and that he benefits *greatly* from having multiple opponents, as he only needs to win a plurality (40%? 45%?), while the anti-McAuliffe vote splinters among Jennifer Carroll Foy, Jennifer McClellan, Justin Fairfax and Lee Carter. As for AG Mark Herring, he’d clearly love to have two opponents, not just one (in this case, Del. Jay Jones), to split the someone-other-than-the-incumbent vote. 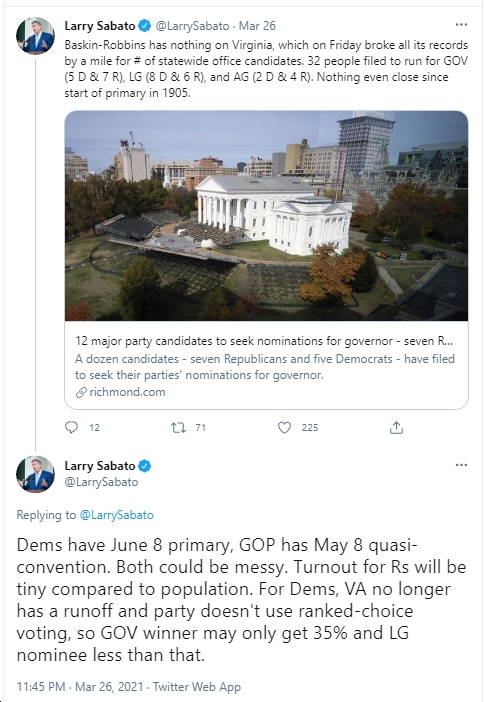