You know what would be a better idea than trying to remove tree sitters fighting to block the environmentally destructive and economically nonsensical fracked-gas Mountain Valley Pipeline? How about *canceling the Mountain Valley Pipeline?” Just a thought. With that, here are some updates on what’s going on at the Yellow Finch tree sit right now. Also, it should go without saying that the media should be allowed to observe what’s going on, as State Sen. John Edwards pointed out in a statement (see below).

In a news release, the department says the removal of the two remaining tree sitters is on schedule.

Crews have spent the morning providing access for and setting a crane, which is now in place, to assist with the removal. Negotiations are continuing with the two remaining tree sitters in hopes that they will come down on their own.

P.S. For some background on this absurd project, see In Letter to Virginia DEQ, Nearly 100 Organizations Call For Rejection Of New Permits For Mountain Valley Pipeline (“MVP is years behind schedule, billions over budget, is proven immitigable, and has caused immense harm to Virginians’ water and lives.”), New Report: “Falling demand, legal and regulatory challenges spell financial peril” for Mountain Valley Pipeline Project (“Mountain Valley Pipeline faces a significant risk that its capacity will be underutilized.”), “[Mountain Valley Pipeline]’s [new stream-by-stream] applications should be rejected and this ill-conceived scheme should finally be abandoned.”, Wild Virginia, Other Groups File Suit in Federal Appeals Court to Challenge FERC’s “Reckless Actions” Regarding the Mountain Valley Pipeline, Trump Administration Rams Through Final Forest Service Analysis of Controversial Mountain Valley Pipeline (“As mountain defenders and trail protectors, we won’t soon forget this parting gift to the gas industry”), Audio: After having his arguments shredded by the judges, MVP’s lawyer whined about the opposition being “implacable!” (Attorney Jon Sokolow: “From today’s argument, it is looking very good for the anti-pipeline forces and very bad for MVP”); etc.

The cops are at Yellow Finch attempting to extract the sits. They have started to clear trees around our sitters and are bringing in equipment. (Tree sit day 931/day 128 of tree sitters resisting an injunction) pic.twitter.com/XWQEBXC3Jb 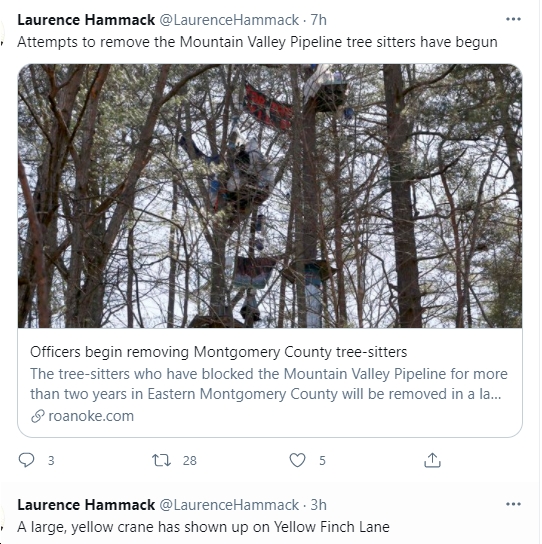 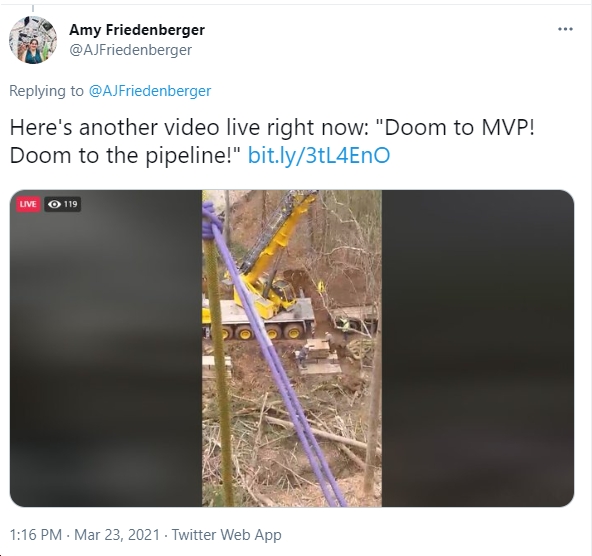 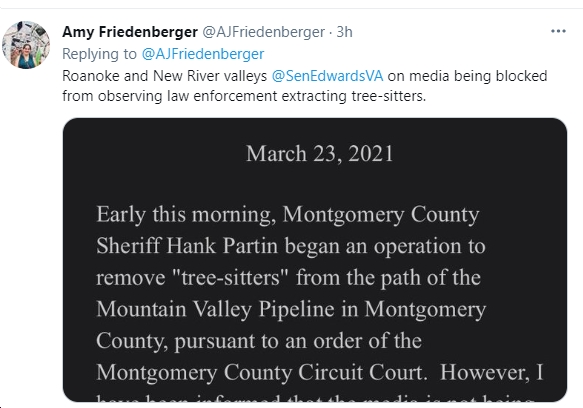 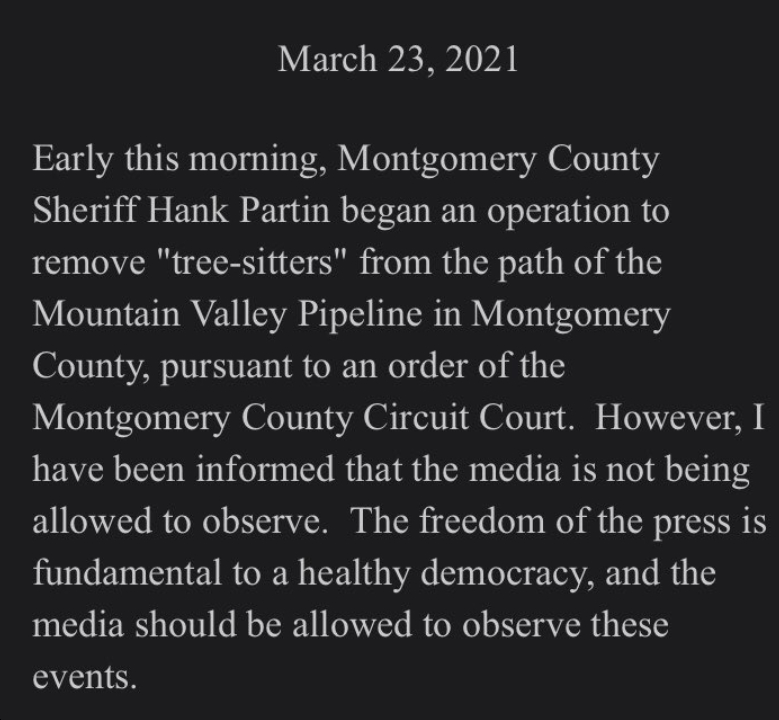 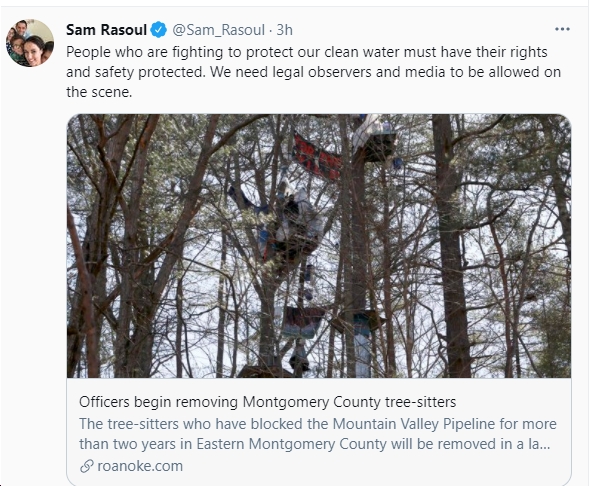 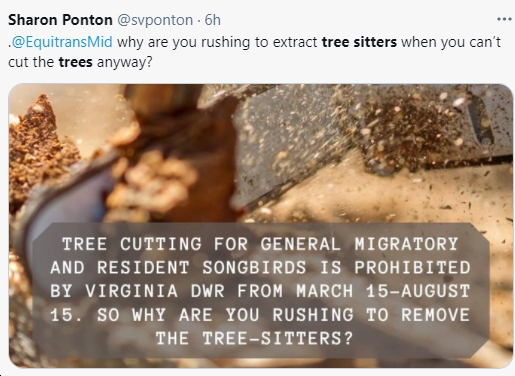 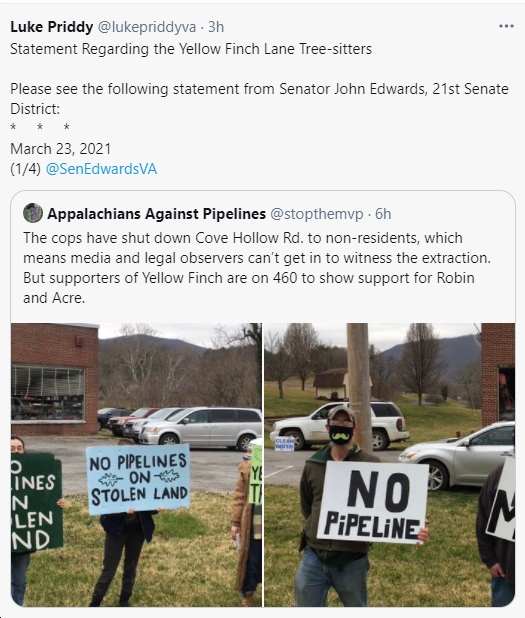 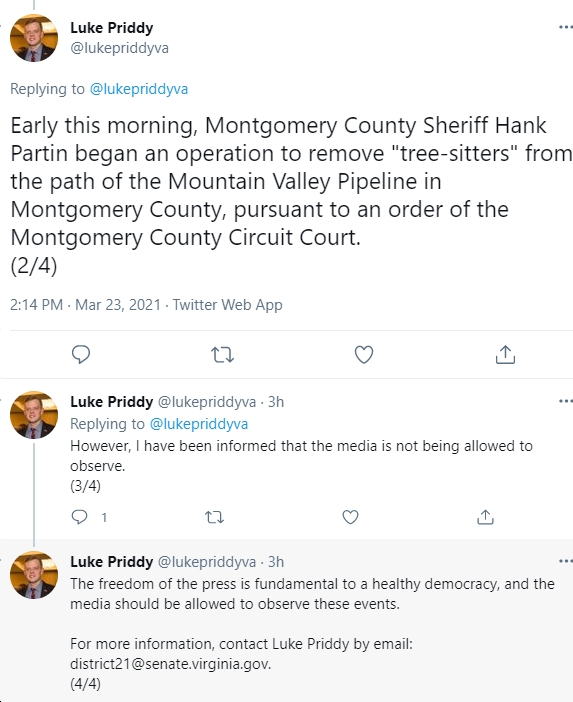