I just wanted to put in one place all these reactions to the news about Roanoke Times reporter Amy Friedenberger – one of the best political reporters in Virginia, being reassigned from covering Virginia politics as Lee Enterprises slashes jobs and as the Roanoke Times “has decided to eliminate state politics as a full-time beat.” I mean, why even bother having a Virginia newspaper, honestly, if you’re not going to cover state politics full time? More broadly, what does this continued decline in coverage of state and local politics, something that’s been going on for at least 10-15 years now, mean exactly?

“There is a paradox in the reality of American politics: The more local an office, the more of an impact it has on any given person’s daily life. Yet the more local an election, the lower the voter interest. Presidential elections drive turnout. State legislators, who decide funding levels for local transportation projects or school districts and who have more influence on the average person’s life than the president of the United States, do not. Now, there is less coverage of those legislators than ever before.

…That, in turn, has given politicians, lobbyists and public relations professionals the opportunity to step into the vacuum. Whether via newsletters, YouTube, Facebook or other social media outlets, politicians are increasingly generating their own news, and interest groups are spinning their own stories.”

Also see this article, which explains:

“Drawing on a content analysis of more than 10,000 stories about US House campaigns in 2010 and 2014, we show that local newspapers over this period published less, and less substantive, political news. We then use panel data from the Cooperative Congressional Election Study to investigate how the news environment influences citizen engagement. Tracking the same individuals over time and simultaneously measuring changes in media content in their communities reveals that reductions in citizens’ political knowledge and participation follow declines in coverage about congressional elections. To the extent that the local news environment continues to deteriorate—a likely scenario as the industry continues to struggle—observers’ concerns about political engagement in localities across the United States appear very much justified.”

“Much has been written about the decline in the ranks of government reporters, but less is said about the impact that is having on government. From my vantage point, that impact is even more menacing than the loss of our legacy newspapers because it has diminished government accountability, reduced access to accurate information, and, led to a decline in public trust.

…As newsrooms cut their statehouse bureaus, they also reduced coverage of complex issues like utility and insurance regulation, giving them intermittent and often superficial attention. Elected officials no longer worried about the appearance of being aligned with special interests because few reporters were connecting the dots. We would write the occasional story about big donors shaping policy and influencing votes, but politicians would just wait us out—until our over-stretched staff left to chase the next big story.“

Does any of this sound good to you? It sure doesn’t sound good to me. Now, of course, there are other ways of getting news, but in the end there’s simply no replacement for having dedicated, professional, experienced, dogged journalists on the beat keeping an eye on our government, letting the public know what’s going on, shining a light on shady practices, etc. Without those watchdogs of democracy – and the decline here in Virginia has been precipitous, as this article details – it seems to me that we’re all worse off, as citizens, especially in an era when anyone can post pretty much anything, factually accurate or (more likely) not, on social media. And we wonder how we end up with such a badly misinformed citizenry, and why they’d vote for the worst of the worst, from Donald Trump to Marjorie Taylor Greene? All I can says is, we’d better figure out a way to fix this problem, or we’re going to be in even deeper shit. 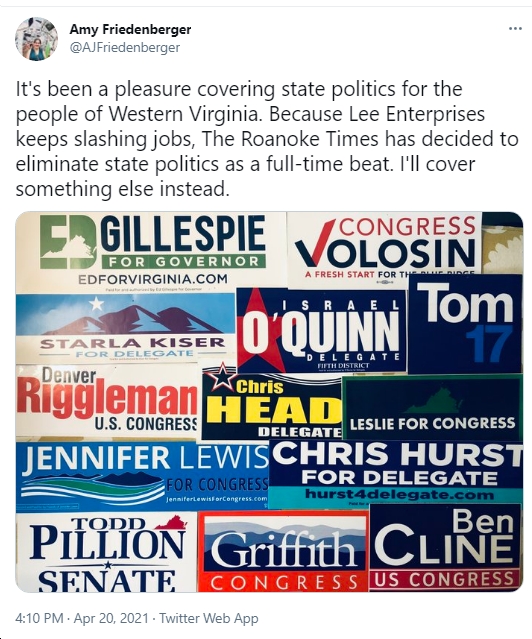 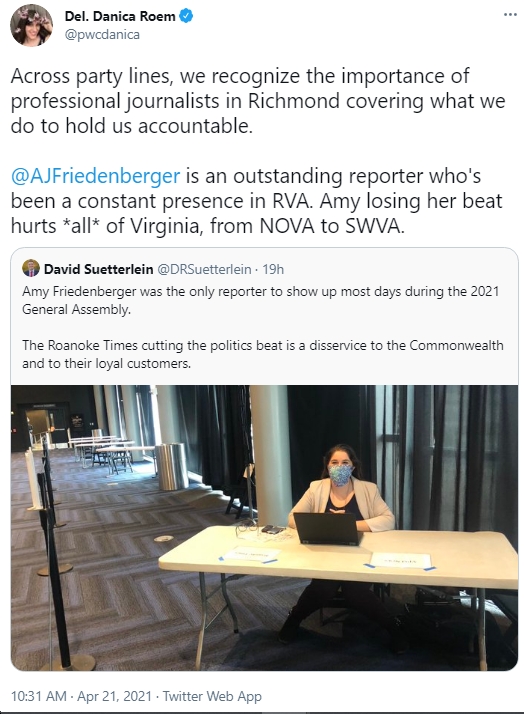 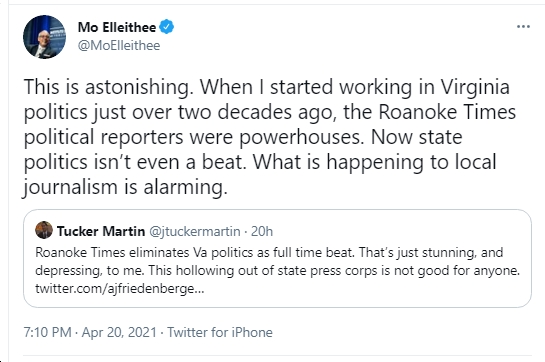 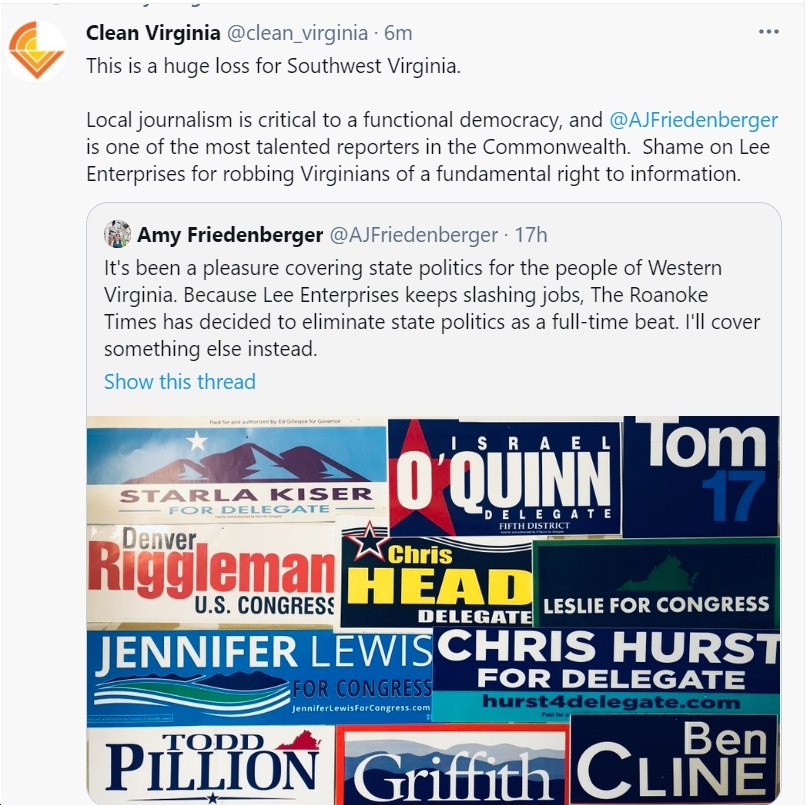 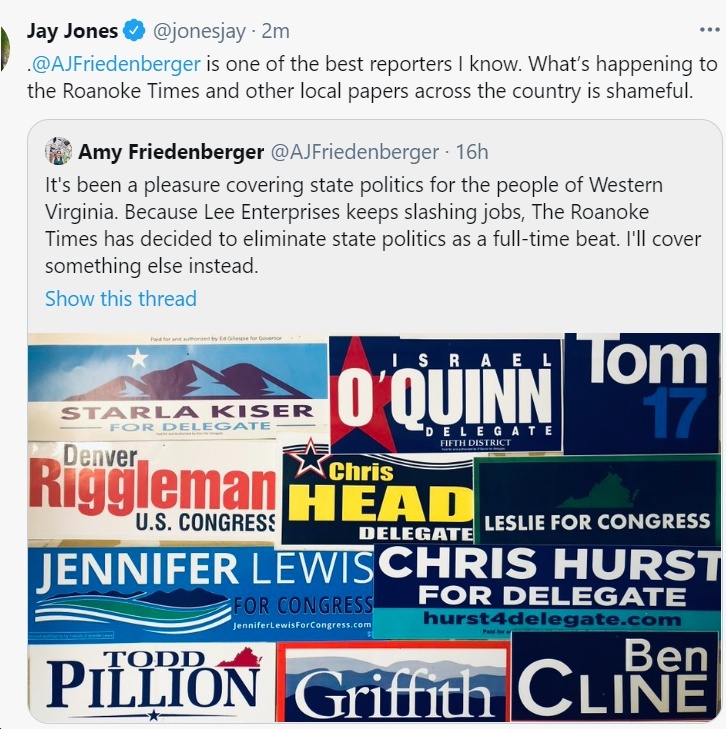 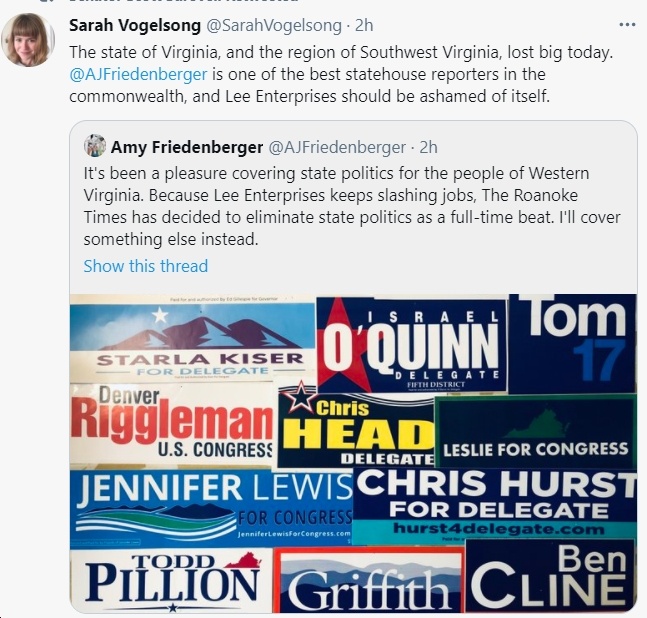 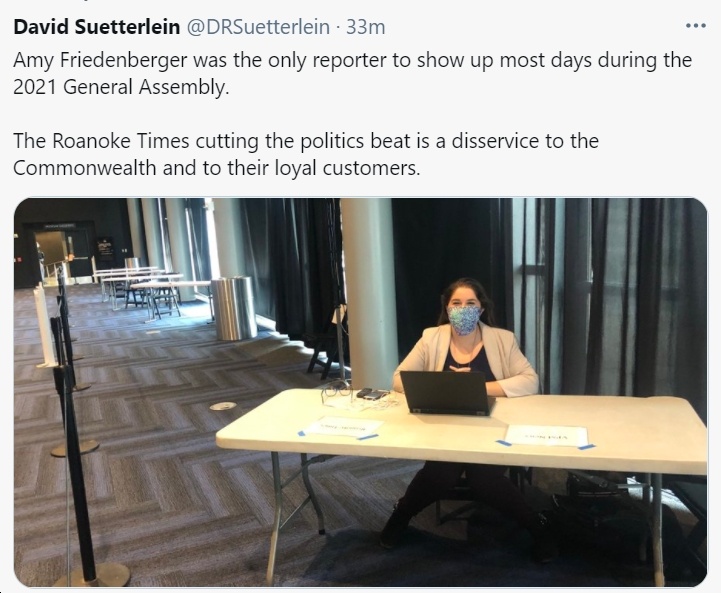