See below for reactions from Virginia elected officials and candidates for statewide office to the conviction of Derek Chauvin in the horrific, disgraceful, sadistic murder of George Floyd.

My statement on the conviction of Derek Chauvin in the murder of George Floyd: pic.twitter.com/pRNpW0lbzh

Nothing will bring him back. But we owe it to Mr. Floyd, his family, and far too many others like him to take meaningful action to reform our policing system. We can start by passing the George Floyd Justice in Policing Act.

WASHINGTON – Congressman A. Donald McEachin (VA-04) issued the following statement today on the conviction of Derek Chauvin in the murder of George Floyd.

“This is a tragedy. George Floyd lost his life, as have too many Black Americans before him, and after him, at the hands of law enforcement,” McEachin said.

“This verdict, while frankly a relief that the system worked this time and a moment of acknowledgement that George Floyd’s life was egregiously and heinously snuffed out, is not a solution. We must commit to changing our policing to ensure these kinds of incidents do not happen again, are not continual headlines and that families are not left shocked and grieving when a loved one doesn’t come home. That is how we honor George Floyd’s life and countless others.”

The jury confirms what we saw: Derek Chauvin is guilty of murdering George Floyd.

I’m thinking about George Floyd, his family and friends, who have been through such much.

The entire country bore witness to the murder of George Floyd. The jury believed their own eyes and rendered a just verdict.

But while justice prevailed this time, far too many Black lives have been cut short with no such accountability. We owe them real, structural change. 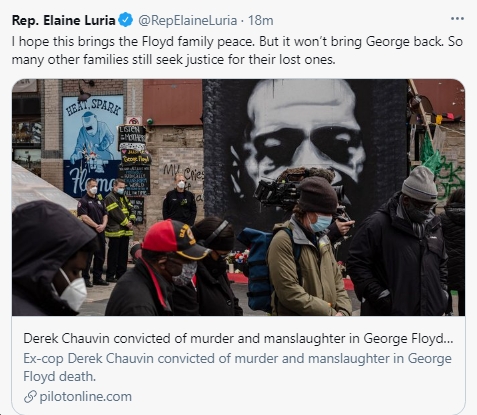 Spanberger Statement on Verdict in the Trial of Derek Chauvin

WASHINGTON, D.C. — U.S. Representative Abigail Spanberger today released the following statement in response to the verdict in the trial of former Minneapolis Police Officer Derek Chauvin related to the death of George Floyd.

“The murder of George Floyd captured — on video — the cycle of brutal violence that still exists on American streets and throughout American communities. Today’s verdict is a step towards achieving justice for the family of George Floyd, and it brings greater attention and human dignity to the lives of those who have been senselessly killed at the hands of law enforcement.

“However, we must expect more from ourselves, our neighbors, our community leaders, and our legislators in the struggle against systemic racism. The footage of Derek Chauvin kneeling on the neck of George Floyd — who was begging for his life — painfully demonstrated the long, necessary work that has yet to occur if we truly wish to achieve equal justice and bring long overdue reforms to police departments across the country. The videos of police shootings made public last week have only underscored the urgency of these changes.

“In the wake of today’s verdict, we should all be committed to carrying out that work — for the sake of our communities and for the strength of our nation. My thoughts are with the family of George Floyd in this moment, as well as with the thousands of American families who have yet to achieve justice on behalf of their loved ones.”

“While a ‘guilty’ verdict in the murder trial of Derek Chauvin is nothing to celebrate, Senate Democrats know the justice being served for George Floyd, his family, and communities all across the United States and world will bring closure for this case but also the turning of a page in our country’s history.

“The death of George Floyd sparked desperate cries and long-overdue demands for change and for justice to be added to our nation’s systems. The trial of Derek Chauvin is not simply a trial of a former officer, but it is a trial of our values as a nation. Senate Democrats applaud the jury for the hard work that they had to undergo during the case.

“Senate Democrats are listening to the continued calls for justice and equity. Working together with resolve and thoughtfulness—not division and violence—we will continue the march toward what is right and just.”

“Justice has been served in the case of George Floyd’s death, but we recognize that we still have a long road ahead of us as we work to eliminate the inequality and injustice within our systems. Floyd’s death reawakened our communities to the need for urgent, effective reforms to ensure greater accountability for wrongdoing by those in uniform. Each person deserves to be treated with the same level of respect by police—regardless of race, ethnicity, or background—while also knowing that law enforcement cares about them and their community.”

Watching George Floyd’s murder, I felt the same trauma my parents felt when they heard about Emmett Till.

While today’s guilty verdict is a step towards justice, George Floyd should be alive today. His death must remain a clarion call for continuing police and justice reform.

McClellan:’Today’s Guilty Verdict is One Step in a Longer March Toward Justice Reform’

“Watching George Floyd’s murder, I felt the same trauma my parents felt when they heard about Emmett Till,” McClellan said. “While today’s guilty verdict is one step in a longer march toward justice, George Floyd should be alive today. George Floyd’s murder must remain a clarion call for continuing police and justice reform.

“The work toward true accountability is only beginning. In Virginia, we’ve been reminded all too recently of the inequity in our justice system. We have made progress in the past year to reform our police and justice system, including banning chokeholds and no-knock warrants, but when a Black Army lieutenant is met with pepper spray and a gun to his face simply because of a license plate, it’s clear that we have much more work to do to end the mistreatment, profiling, and violence against Black and Brown people across the Commonwealth.

“As governor, I will continue the work I’ve done in the legislature: to lead the charge on justice reform and police accountability from day one. I will continue to fight to end qualified immunity; repeal low-level offenses that criminalize poverty, mental illness and addiction; ensure fair trials do not depend on how much money you have to pay a lawyer; ensure real accountability to any law enforcement officers who break their oath; and focus our corrections system on rehabilitation and re-entry. It’s time to build a Commonwealth where justice for all is a reality.” 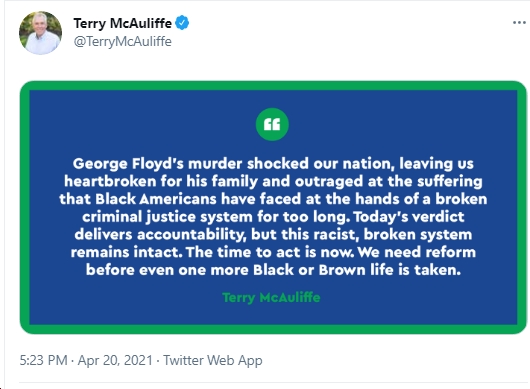 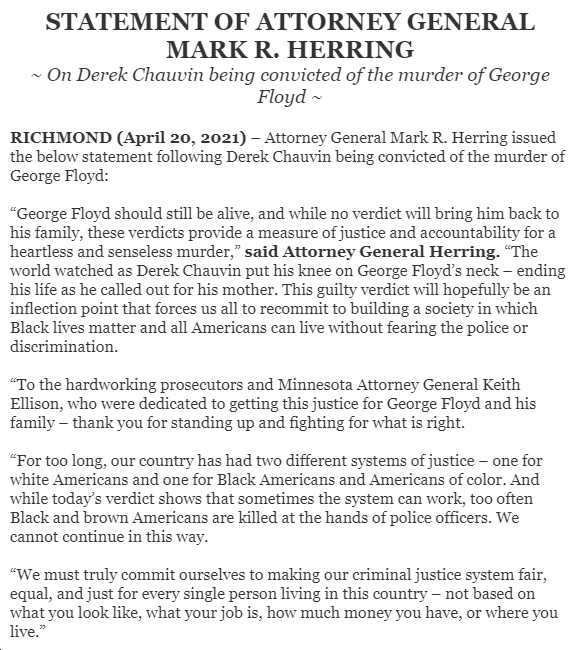 The verdict shows that a uniform doesn’t mean you can get away with murder. It’s sad that the bar is that low.

Real justice for George Floyd is creating a new system where our lives aren’t in danger whenever we deal with cops. Real is justice is the end of policing that kills.

We knew it was murder when we saw the video.

Del. Hala Ayala’s Statement on the Verdict in the Trial for the Murder of George Floyd

WOODBRIDGE, VA — Delegate Hala Ayala today released the following statement on the verdict from the trial for the murder of George Floyd:

“First and foremost My heart goes out to Mr. Floyd’s family and the city of Minneapolis during what must be an incredibly challenging time. The world has been traumatized watching the killing of another black man.  Healing this deep rooted trauma will not happen overnight.

Although today’s decision is a step in the right direction, we have so much work to do to heal our nation and ensure everyone can feel safe in our neighborhoods and hold our police accountable. There is so much implicit bias and inequity within our institutions of justice and we must be willing to do the hard work and root out these racist policies. I look forward to continuing to build on the reforms our Commonwealth has passed and create a more just society here in Virginia.”

ANDRIA McCLELLAN STATEMENT ON THE VERDICT IN THE DEREK CHAUVIN TRIAL

Norfolk, VA — Norfolk Councilmember Andria McClellan, candidate for Lieutenant Governor, has released the following statement regarding the jury’s guilty verdict in the trial of Derek Chauvin:

“I am relieved to see this movement toward accountability today. Black and brown people should not live in fear of being harmed by police; yet that is a reality for far too many, and it’s up to us to bring that to an end. While this single decision does not bring back George Floyd, let alone undo the harm from centuries of racial inequities and police violence, I hope it signals a future with more transparency and accountability. It is incumbent upon us to address the systemic racism in our society and build a more just future for all. Black Lives Matter.”

“This time, for once, justice is served. Rest in peace, George Floyd. But we can never truly rest until the systemic racism that has long pervaded American history is rooted out in its entirety.”

Today, George Floyd’s family received justice. Systemic racism and the toll it takes on our communities of color is still real and there is much work ahead to ensure every American is equal under the law. This verdict continues the long path of healing and progress. 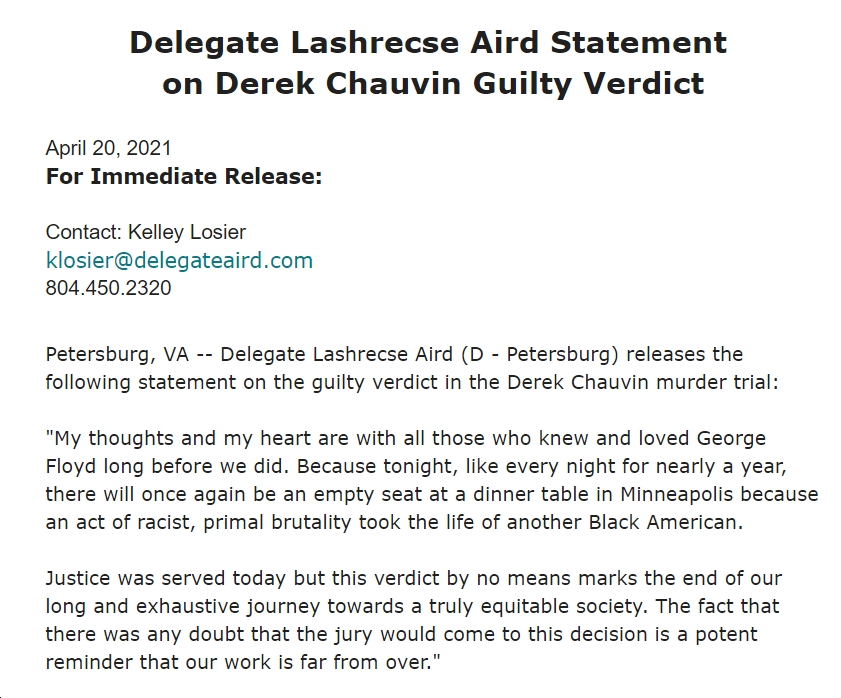 “Today, the American justice system prevailed. I am praying for the family of Mr. George Floyd, so that they can finally begin to heal. It is important that we remember a human life was taken and will never be replaced. I commend the prosecution team who worked diligently to present the evidence against former Officer Derek Chauvin. They are an example of the kind of courage we need in our law enforcement to make sure that there is justice and protection for all.

While we feel justice was served today, there is still more work to be done. There are still other instances of injustice like the violence against Second Lt. Caron Nazario and the murder of Donovan Lynch. We have to continue to fight for change. I believe that in this moment we are all being called to do more. Here in Virginia, we are being called to do more. My faith teaches me that “When the righteous cry for strength, the Lord hears,” so let’s raise our voices.  Let’s stay in this fight together and continue moving forward.” 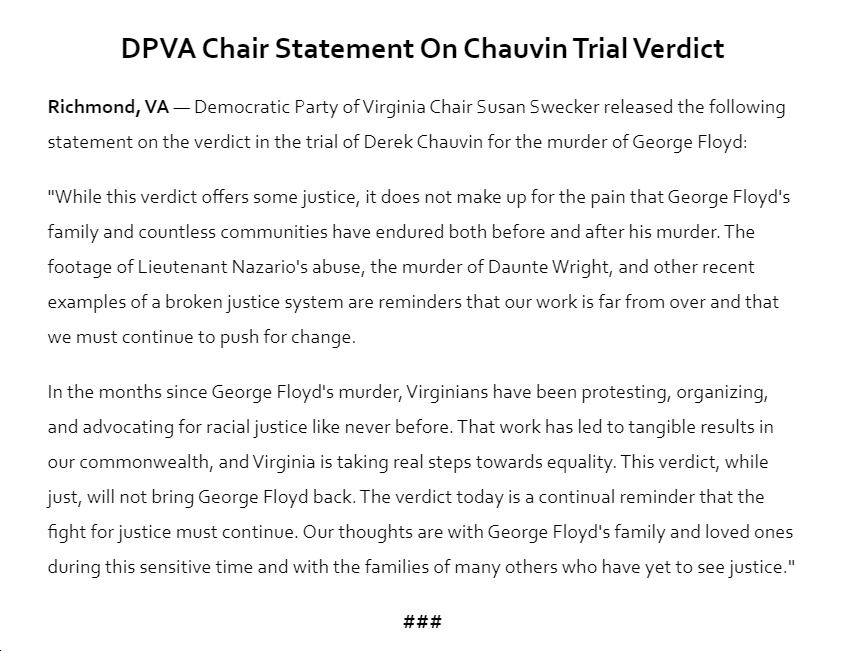 Virginia Must Perform a Water Quality Review on MVP’s FERC Proposal Another Chance to Ensure Protection of State Waters https://bluevirginia.us/2021/05/virginia-must-perform-a-water-quality-review-on-mvps-ferc-proposal-another-chance-to-ensure-protection-of-state-waters