Significant development in the fight against fossil fuel development in Virginia, as the U.S. EPA – finally under competent, sane management! 🙂 –  is saying that the fracked-gas Mountain Valley Pipeline’s plan to cross hundreds of water bodies does NOT comply with Clean Water Act guidelines, and is telling the Army Corps of Engineers NOT to issue a permit to cross those waterways. Wow! See below for a press release on this major news, from the group “Wild Virginia,” which cites a 5/27 letter – released yesterday to the public “in response to a Freedom of Information Act request filed by Appalachian Mountain Advocates.”

By the way, it’s also worth noting that the Virginia DEQ is currently reviewing these same water crossings to determine whether there is “reasonable assurance” that the proposed work won’t harm Virginia’s waterways. In this letter, the U.S. EPA effectively is telling VA DEQ that there can be no such reasonable assurance. And if VA DEQ continues to ignore the law, a federal court can review their determination in light of what U.S. EPA has now said. Sweet!

U.S. EPA Tells Corps Not to Issue MVP Permit
Insufficient Information and Serious Threats to Water Quality Cited
The U.S. Environmental Protection Agency (EPA) has recommended that the Army Corps of Engineers (Corps) not issue a Clean Water Act permit to allow the Mountain Valley Pipeline to dig and blast through hundreds of waterbodies in Virginia and West Virginia.

In a letter dated May 27, 2021, EPA explained that the available evidence is incomplete but warned that serious and long-term degradation of streams and wetlands may result from the many pollution discharges proposed, especially in valuable and sensitive headwater stream systems. EPA publicly released the letter on July 7, 2021, in response to a Freedom of Information Act request filed by Appalachian Mountain Advocates, an environmental law firm based in Lewisburg, WV.

The EPA letter describes extreme concentrations of impacts in relatively small areas, including more than 200 sites in the upper Roanoke River watershed and nearly 100 more in a portion of the New River drainage. Proposed pollution discharges in these smaller streams threaten endangered fish species and native trout along the pipeline route but can also result in widespread downstream damages, having regional and even national importance.

Despite these serious threats, MVP has failed to provide necessary information about the possible damages it would cause. EPA states that MVP’s application includes “deficient characterization of the aquatic resources to be impacted, insufficient assessment of secondary and cumulative impacts and potential for significant degradation, and the proposed mitigation.”

EPA’s review is conducted under its authority to enforce the Clean Water Act, in accordance with requirements that the Corps must meet. These regulations, known as the “404(b)(1) guidelines,” specify that aquatic impacts must be avoided unless there are no practicable alternatives that would be less damaging and generally prohibit discharges that “cause or contribute to significant degradation of the waters of the United States.” In the letter, EPA concludes that the Mountain Valley Pipeline, “as proposed, may not comply with the Guidelines.”

David Sligh, Wild Virginia’s Conservation Director, stated: “As EPA explains in its letter, many of our most precious waters are at high risk from further degradation by MVP, yet no agency has done the kind of thorough assessment that’s required. What EPA describes is the kind of stream-by-stream review that the public has been demanding for more than five years. It is now time for the Corps and the state regulators in both Virginia and West Virginia to step up and do their jobs. We are confident that proper analyses by these agencies will prove that MVP cannot go forward with this ill-conceived plan in a way that protects our waters and our communities.” 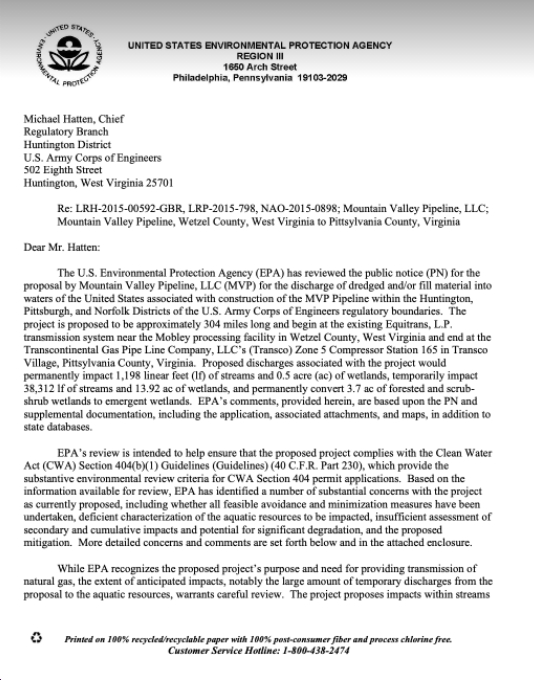 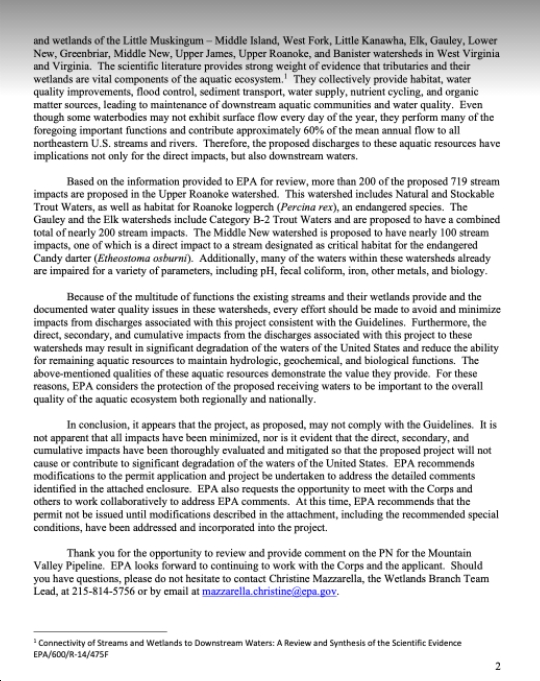