Remember how, back in spring, there were actually “journalists” (in air quotes) writing about Glenn Youngkin was relatively “moderate” or was “pivoting” to the “center?” It was laughable then, to anyone who was paying literally the slightest bit of attention to what Youngkin was saying leading up to the May 8 nomination contest. And it’s even more laughable today, given Youngkin’s embrace of Trump (“President Trump represents so much of why I’m running”) and Trump’s multiple endorsements of Youngkin (in response, Youngkin said he was “honored”).

So anyway, there’s no doubt at this point how Trumpist and hard-right Youngkin is, even if he’s desperately trying to keep Virginia voters from knowing about that (e.g., he STILL has no issues or policy positions listed on his website!). Is it working for Youngkin? Not according to Virginia Republican Joseph Szymanski – whose Twitter bio literally reads #VirginiaRunsOnYoungkin – who writes in Elections Daily that:

“Instead of taking what would likely be the advice of his advisors to focus on the economy and rebuilding from COVID, Youngkin has gone the complete other direction…This past month, Youngkin has been on an ‘election integrity’ kick…That’s a massive problem for Virginia Republicans. Not only does that mean there has been no consistent messaging, but it has dragged down some of our lower ballot campaigns as well.”

Now, in a continued attempt by Youngkin to rally the hard-core, far-right, Trumpist “base,” the VA GOP 2021 ticket is going to be rallying this Friday evening with none other than Rep. Dan Crenshaw (R-TX02), whose political views are hard right on  many key issues (e.g., “opposes gun control measures including bans on semi-automatic firearms“; believes that Roe v Wade was a “bad precedent to set”; claims falsely that the Affordable Care Act supposedly is an “unmitigated disaster” and should be repealed; and who:

Crenshaw also claimed, falsely, that it’s mostly “the ‘largely liberal’ and ‘pro-Democrat’ news media…feeding the narrative that Republicans are still fighting over the election’s results.” And then there’s Rep. Dan Crenshaw’s search for ‘woke military’ complaints draws ridicule — and war movie quotes. So…yeah, that’s who Youngkin/Sears/Miyares are going to be rallying with on Friday night. As Republican George Allen once said, “You can tell a lot about people by the folks they stand with.” You sure can…you sure can. 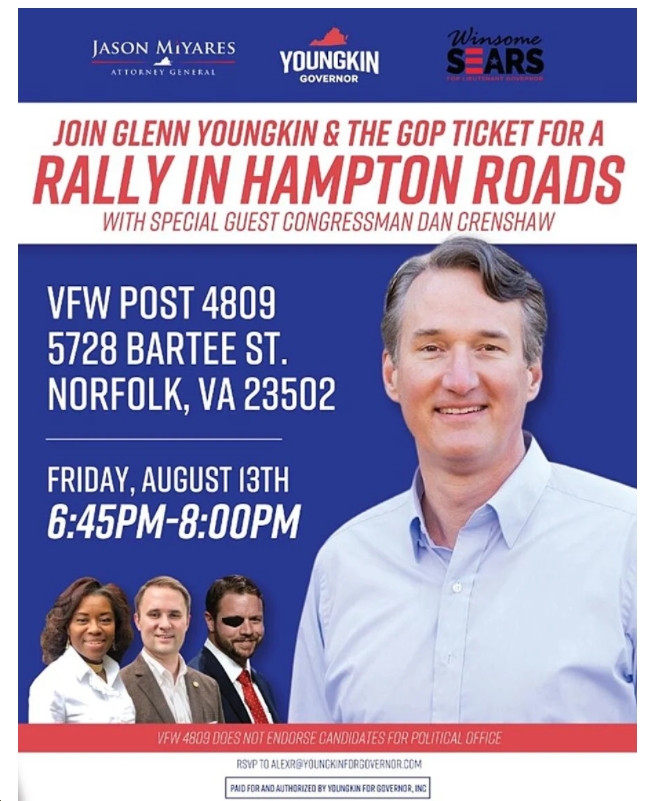