Over on his Facebook page yesterday, former/two-term Lt. Governor Bill Bolling – a conservative Republican, albeit not of the Trumpist variety – posted a very simple and obvious message, one that should be 100% non-controversial in a sane world:

There is no good reason to not be vaccinated. Vaccines are safe and effective. Do your part, get the shot! The life it saves might be your own, or someone you love.

And while your at it, wear a mask in public places, especially around larger crowds. It will also help protect you and those around you.

Except, sadly, we don’t live in a sane world. Instead, we live in a world where Trump cultists, Republican governors, Republican members of Congress, Fox “News” hosts, and millions of denizens of the right-wing echo chamber don’t appear to live in a world governed by fact, science, empiricism, reality, etc.

Case in point? Check out the following (unhinged, false) responses to Bolling’s commonsense, no-brainer message about getting the vaccines and wearing masks in public places. Nuts, eh? Note that Bolling doesn’t really respond to or engage with these people, other than to say: “That is absolutely not the case,” “Don’t be a goofball” and “There you go again…”  That’s probably a wise move on Bolling’s part, as these people aren’t going to listen to him (again, a conservative Republican who served two terms as Virginia’s Lt. Governor), or anyone else for that matter who encourages them to do what public health experts almost unanimously recommend to combat the deadly COVID-19 pandemic and to protect people’s lives. 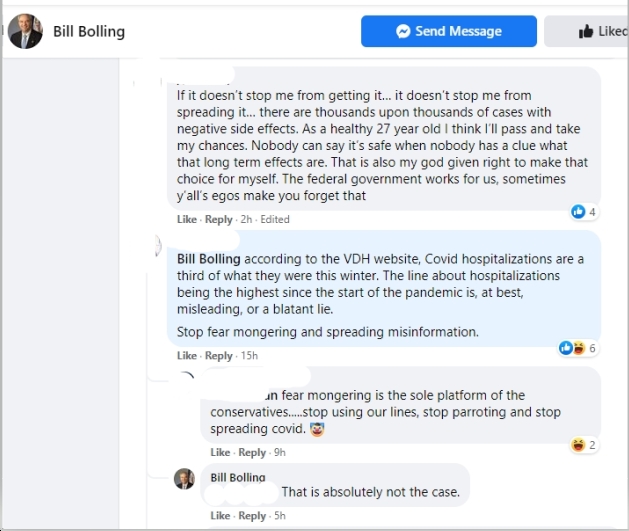 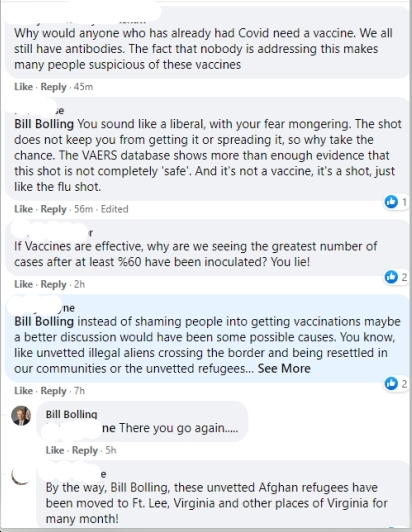 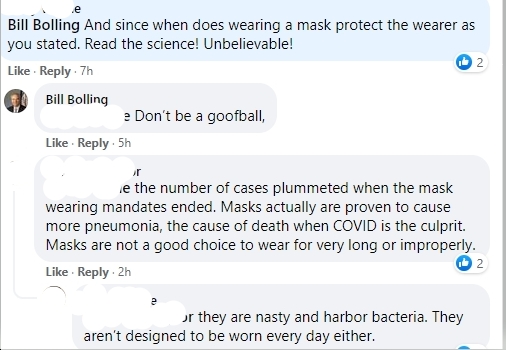 This will be interesting https://bluevirginia.us/2021/09/wednesday-news-awful-new-revelations-about-trump-and-jan-6-show-mike-pence-is-no-hero-the-supreme-court-is-drunk-on-its-own-power-newsom-touts-victory-over-recall-as-rejection-of-trump#comment-5535947302