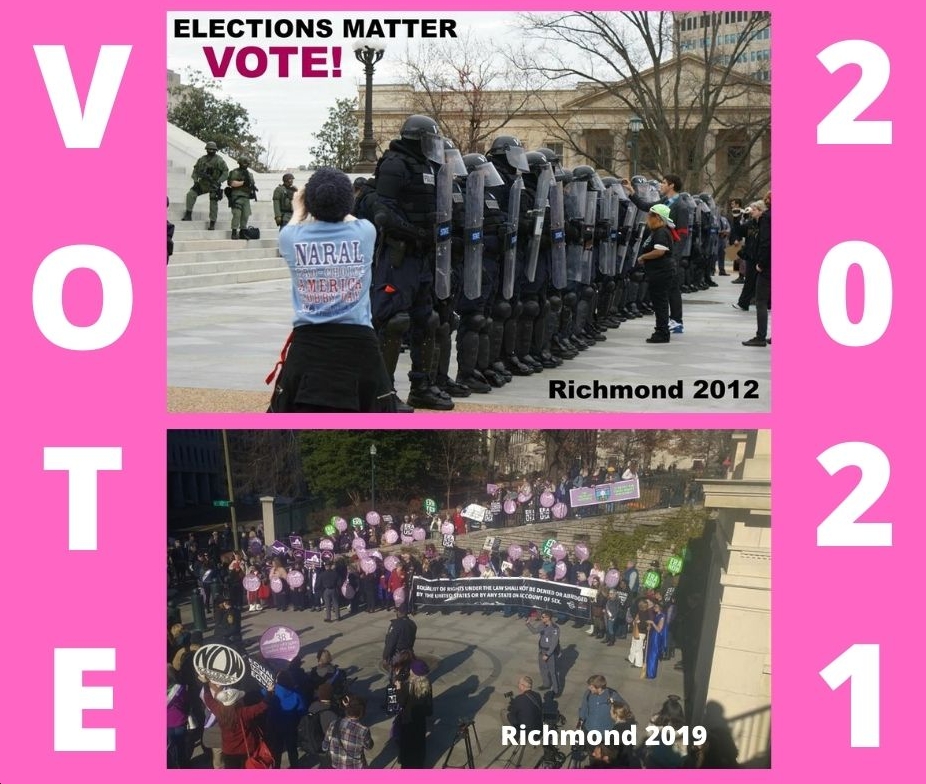 A week from today, we will wake up filled with hope or dread. Our actions in these final days before the election can change the course of Virginia’s history. From one founded on a white supremacist patriarchy to a new era of a government fulfilling the promise of uniting people, indivisible with equity for all.

It was only two years ago that we made history, flipping Virginia Blue after TWO decades! What happened next is an outstanding record of progressive change. Virginia expanded medicaid, ratified the Equal Rights Amendment, passed common sense gun laws and criminal justice reform as well as these videos of what Dems did, all the House accomplishments and how Dems delivered. Share these videos to remind people of these positive changes. There’s a lot of progress to defend and to build on that’s at stake this election.

None of that would have been possible without the enthusiastic sails of the grassroots network throughout Virginia. Terry McAuliffe provided the wind for those sails by stumping and raising money to support House candidates to help them win. Terry stepped up to be the Campaigner in Chief when Northam and Fairfax were mired in scandal.

When Terry became governor in 2013, he appointed a transgender woman to be the Commissioner of Public Health to undo the oppressive women’s health regulations the Republicans passed when they had the trifecta. Remember the transvaginal ultrasound regulation? Appointing a transgender woman was a bold move to make in a state that still has a constitutional amendment that marriage is only between a man and a woman.

When Terry restored voting rights to over 200,000 felons that had served their time, the GOP sued to stop him. After Virginia’s Supreme Court ruled that the governor could only restore rights on a case by case basis, Terry didn’t give up. He worked methodically to restore as many rights as he could. Thousands of people can vote today because of Terry’s efforts. Terry’s values are in alignment with Justice Democrats.

Terry understands the work that will result in climate solutions. From his website:

Recently, the Koch brothers-founded organization Americans For Prosperity and the Republican-aligned Restoration PAC primarily funded by a billionaire who bankrolled a group that marched to the Capital ahead of the January 6 insurrection, have been pouring money into Virginia to support Youngkin’s campaign. A subsidiary, The Concord Fund and Free to Learn Action of the Judicial Crisis Network (a conservative dark-money group that helps to fill federal courts with conservative judges and pushes voter suppression laws), is spending over $1 million attacking schools for teaching “critical race theory” and Terry for not supporting parents.

Since the American Revolution, Virginia has been a battleground state. Richmond was the final home for the Confederacy. There’s been continuous friction between progress towards justice and those who want to return to the “glorious” days of the past when women and people of color were oppressed. Now, Youngkin has chosen to focus on racist dog whistles and banning books in the final days of his campaign.

Virginia is a beacon of hope for a weary nation because it was the first southern state to gain a Democratic trifecta in decades. A divided nation is closely watching Virginia. This election is a test about whether a new Blue Virginia can defeat the forces of an anti-democratic Republican party trying to gain control of future presidential election outcomes through Republican-controlled states.

Now, it’s up to us to #DoTheWork #Indivisible to hold the line and push FORWARD to turn the Blue Waves into a Rising Blue Tide.

Texting training necessary to complete in order to text voters