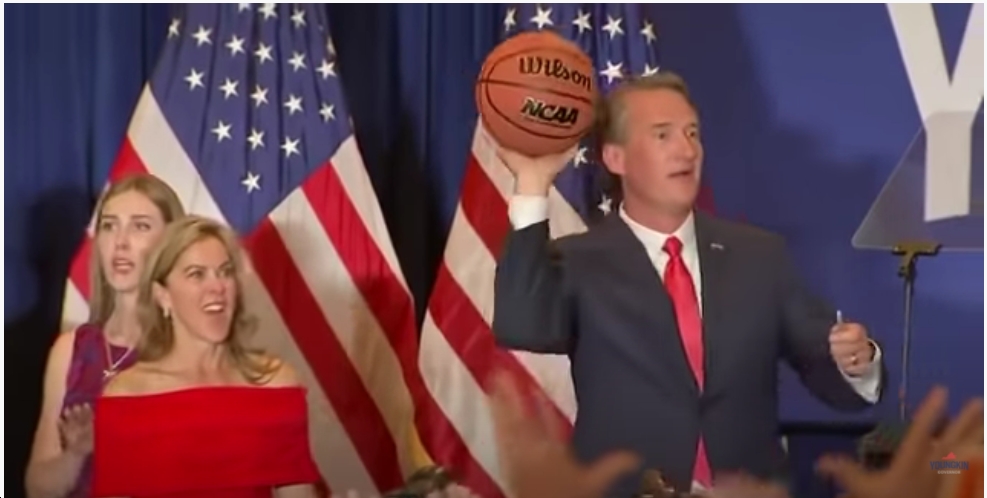 Yesterday afternoon, I drove my oldest son to his soccer practice. As I stood on the sidelines, watching him run up and down the field with his team, I made small talk with the mom (“Nicki”) of one of the players on the team. “Jimmy sure is attacking the goal better, boy it’s a chilly day, I heard it’s supposed to snow tomorrow, oh my goodness, etc, etc.”

But, given the huge election that had occurred the day before, the conversation eventually meandered it’s way towards politics. “You’re that guy that ran for that one thing once, right?” she asked me. The Virginia House of Delegates, I nodded, yes. “Yeah, I remember. I voted for you!”

I smiled and thanked her, which she waved off, instead asking my about the previous day’s election.. “Must be tough day.”

“Disappointing, for sure,” I replied, a chagrined look on my face. “Not surprising. But disappointing. Yeah.”

“Your guy lost, huh?” Nicki asked. I winced involuntarily. My ballot in the Democratic primary in June fared pretty poorly, and I’ve never considered Terry McAuliffe “my guy”. But I unhesitatingly voted for our ticket. I’m an ER Nurse. I have colleagues who work in Texas and Florida. I understand very well what the stakes are if Virginia goes backwards. I mean, this week was probably the first one I’ve had where I worked no extra hours since… I dunno. Early summer, probably. Things are still bad, but we’re not where Colorado is now– and we were damn close to exactly that at one point not long ago.

“Ahhm,” I hemmed, looking for words, “I mean… well. Things definitely didn’t come out the way I wanted.”

“Yeah,” she said. “I really wasn’t sure who I was going to vote for, but in the end I decided on Youngkin.”

I sighed internally- a deep, soul-rending sigh- and told Nicki I didn’t begrudge her decision. “But out of curiosity,” I asked, “what was the thing that made up your mind?”

Nicki chuckled aloud. “Honestly,” she told me, “it was when (Youngkin) told Donald Trump to stay the **** out of Virginia.”

I’d like to think I did a good job of keeping a poker face at this response, because it absolutely was not the one I was expecting. “Really,” I said flatly, “I hadn’t heard that.”

“Yeah! (Youngkin) told Trump to sit down and stay away. He even made him do a telephone thing!” she said brightly, I assume referring to the “call-in rally” Trump conducted in the final week of the race.

And, at this, Nicki started to laugh. A deep, belly laugh, dripping so thickly with schadenfreude I could almost visualize her mental picture of Donald Trump, stuck at Mar-a-Lago, apoplectic and waving his arms impotently.

I have to give Glenn Youngkin’s consultants a real hand there: they knew exactly what they were doing. They knew Donald Trump was radioactive in Virginia politics. They knew they had a candidate so amorphous they could treat him like they made him in a video game’s character creation mode, building his “statistics” the exact way they wanted. They knew how to whip and flog their media universe, as they kept Glenn away from any unscripted interviews and laughed gleefully as the “liberal
media” uncritically played their press releases as straight pieces. You can hate the results, but you can’t hate the talent that got it done.

And you know what else?

The Democrats’ strategists and messaging team pretty much let ’em do it – just laid down and let them run with their candidate created out of whole cloth. Instead of pushing back smartly and effectively, Democratic messaging and strategic “experts” let the hard work put in by candidates across the state, by the activists and campaign staffers and volunteers, go for naught. Maddening.

Now, we’ve arrived at a point where we need to hope that Glenn Youngkin wants to run for President and will thus moderate what he wants to actually accomplish in Virginia. Honestly, he’d be stupid not to: he just flipped a Biden +10 state, and did it while making a giant cuck out of Donald Trump.

Look, I get that fighting back against a lot of their culture war shit is hard to do. Since they gave up on policy eons ago, they’ve honed it to a science, and have convinced the supposedly “liberal media” to uncritically runs breathless missives like “Republicans say that teaching CRT in kindergarten classes is damaging our kids”, while I – a random ER nurse from rural Virginia – once had an entire media cycle dedicated to a single tweet I wrote in thirty seconds after leaving an overnight shift in the ER. Politifact, Facebook, Alex Berenson, and Glenn Greenwald all piled in on me,
saying that Ron Desantis’ Florida was misreporting  COVID/pneumonia deaths. “FALSE! While that’s TECHNICALLY correct, here’s 4,500 words and interviews we did with five experts on why it’s not the comparison we’d like to see!”

So we can whine and holler and cry about how unfair that is. Or we can figure out how to respond to it, how to do our own thing, and move forward from here. But if we’re going to do the latter, we better do it – and do it now.