See below for a great question by Del. Alfonso Lopez, the Virginia House Democratic “Whip,” regarding Glenn Youngkin’s Executive Order naming Angela Sailor of the hard-right Heritage Foundation (climate change denial, false “voter fraud” claims, anti-“CRT,” you name it) as Virginia’s new Director of the Office of Diversity, Opportunity and Inclusion, and specifically tasking her with being “an ambassador for unborn children.” As this article notes, Sailor:

“…has written multiple pieces for the Heritage Foundation arguing that critical race theory is harmful to children, applauding the work of the 1776 commission, the advisory committee established by former President Trump to foster a ‘patriotic education'”

And Sailor has also written:

So basically, Virginia elected Ken Cuccinelli as governor…except his name is Glenn Youngkin. Or to put it another way, riffing off of Amanda Chase’s “Trump in Heels” line, Virginia elected “Amanda Chase in a Sweater Vest” – Glenn Youngkin. Seriously, though, at this point anyone who portrayed Glenn Youngkin as “moderate” in any way, or who predicted that once elected, he’d tack towards the “center,” should probably ditch political reporting, prognosticating, etc. as a profession, hobby, whatever. 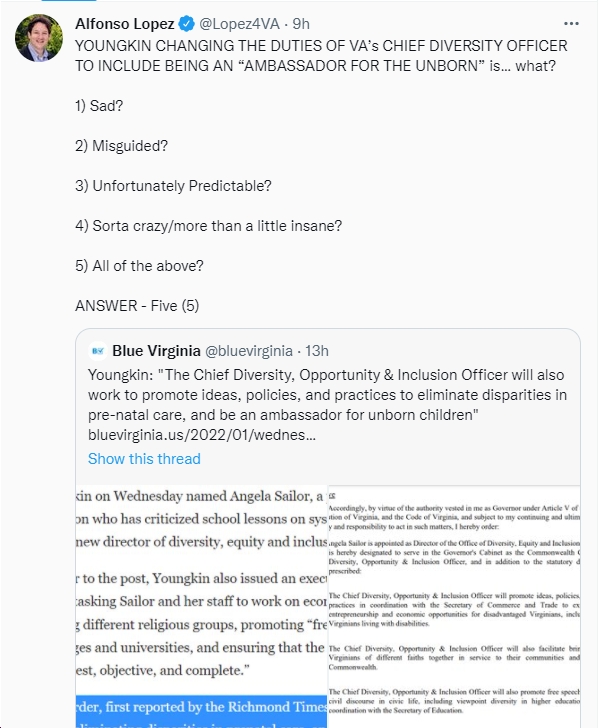