I’ve long tried to bring people’s attention to the fact that the modern Republican Party is entirely bereft of policy. I don’t mean “good” or “bad” policy; I’m not even talking “conservative” policy. I mean any policy. The modern GOP is simply a mishmash of situational ethics and moral relativism in the pursuit of winning at all costs.

Without exaggeration, Donald Trump could get on TV right now and demand that we nationalize the means of production to protect the proletariat from the bourgeoise, and Tucker Carlson, Ben Shapiro, Kevin McCarthy, JD Vance, et al, would be shoving each other out of the way to get on the air first to scream “What a brilliant idea! That’s been our idea all along! We’ve always thought you should do that!”

This is why trying to “negotiate” with establishment Republicans is pointless. There’s nothing to compromise on. The GOP leadership ruthlessly purged themselves of any people who actually believe in government accountability, and expanded personal freedom. Their party is now exclusively one who views the role of the state not to get out of the way, but to reward friends and crush political enemies. They know full well that the American people, by large margins, are with progressives on issues across the board- even hot button ones like abortion and guns. Ergo, if the Democratic Party ever figures out how to message worth a damn, the Republicans will be done for.

And the thought of that power slipping away has made them desperate. They understand they leveraged their souls to support Donald Trump. One of my favorite rebuttals to anyone who champions the Republican Party’s “making abortions for rape, incest, and a mother’s health illegal and punishable by 10 years in prison” effort is to say that, well, personally, “All I want is abortion to be as safe, legal, and available as Donald Trump wanted it to be for his mistresses.”

Guess how many Republicans have scoffed at that and told me “No! Not Donald Trump! He would never do that!”

Mmhmm. I think you know. They certainly know. They know they went all in on a wet noodle. They sold their souls and their political future at the altar of Donald Trump. They threw away all of their supposed moral high ground, all in an attempt to accumulate total political power. And then they watched while, when given a gift-wrapped opportunity to turn the United States of America into a full-blown autocracy- disaffected citizens, a media rotten with an obsession on clicks and optics instead of accountability, cronies willing to sell out the entire country for their own gain- Trump completely blew that opportunity to play with sharpies, look at solar eclipses, and prostrate before an even bigger wimp than himself.

Now they have to “launder” their morals like the Mafia launders money. They have to make it all worthwhile, to prove they’re definitely still the “good guys”. But, more than that, they have to get something out of everything they threw away.

And so we arrive at this: 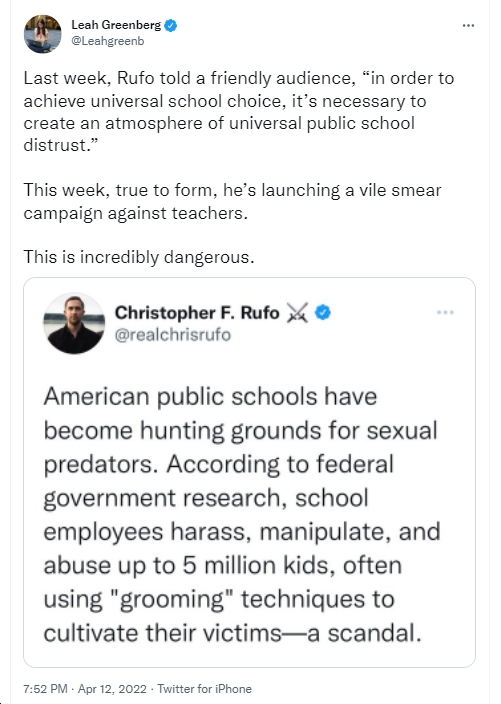 Lest anyone reading this get the vapors and go searching for a fainting couch because ‘ole Kellen Squire was being “too intense” in his rhetoric, this isn’t hysteria: these are the exact words of the Republicans arguing this. These aren’t fringe folks screaming this – it’s the establishment Republican party championing these claims. Which makes sense, since they, more then anyone, sold themselves and went all-in on Donald Trump. So if they close their eyes tight, plug their ears, and create a mental world where anyone who disagrees with a Republican is a pedophile, then all of their transgressions are forgiven!

I write frequently about being an emergency department nurse, having covered topics ranging from fighting COVID, to being in the ER in Charlottesville during the Unite the Right attack, to chronicling the trials and tribulations of practicing emergency healthcare in rural America. Healthcare is a common thread that unites us all, and in the ER, I get to witness every policy failure in the country at ground zero. However, I have never, ever, ever written about is the robust role we play in the ER fighting abuse, exploitation, and human trafficking. And that is for a simple reason:

No amount of political clout is worth even an infinitesimal chance it will interfere with our ability to help even one single person in the future.

Victims of abuse, exploitation, and trafficking already have almost everything going against them. It is incredibly hard to help them as it is. And any discussion from me on what we do, how often we do it, and the lengths we go to to protect victims- all of that can get back to victimizers and allow them to continue their evil unabated. Even writing this much has taken me days of agonizing over. No quantity of attaboys, political donations, or social media clout will ever be worth that.

The Republicans’ screaming “groomer” and “pedophile” at anyone and everyone who disagrees with them is a godsend to the actual people who commit those kinds of crimes. Traffickers and abusers could not be happier than to have an environment where they are given this kind of cover to do what they do. And in case you miss my meaning, let me just be abundantly and unequivocally clear here: because of Christopher Rufo and the modern Republican Party, children are going to be trafficked, abused, and likely worse.

And honestly, that’s likely to be the very bare minimum of what will happen. How many people are going to get killed because Christopher Rufo and Tucker Carlson sic a mob onto them? Whip people up in a frenzy? Hint that having ignored all of Trump’s moral failings can be redeemed if only they kill a few Democrats, or teachers, or Disney World cashiers, or whatever other group they’re after this week?

But that’s okay with them. That’s exactly the way they want it to be. They can’t win on policy, governing, or making the lives of Americans better- this is the only way they have left to hold on to any power.

And, hey: if a few children get abused, or trafficked, or a few Democrats, teachers, or LGBT folks get killed by the wackos they’re radicalizing, as long as a Republican wins at the end of the day…

Isn’t it all worth it?