This past Thursday, we reported on Fairfax County-based attorney James Abrenio sending AG Jason Miyares’ office a formal Freedom of Information Act (FOIA) request, following the refusal by Miyares’ office to provide the requested information based on a request made by Abrenio on Twitter. The reason for the FOIA request, as Abrenio wrote at the time, was as follows:

“…I’m making the FOIA request to provide clarity to our community as to the specific threats to Virginia churches that you referenced, that you received prior to your statements, which warranted your May 7th and May 8th statements. I also want to clarify the exact criminal and civil statutes you intend to pursue should a member of our community violate said statutes…”

For more background on what Abrenio was referring to in his FOIA request, see Virginia Democrats Rip Far-Right AG Jason Miyares For “divisive parroting of fictional right-wing bot accounts,” “pushing right-wing propaganda,” Twisting the 1st Amendment, etc. (Miyares fear mongers about supposed “threats” by the “extreme left” to “[disrupt] Catholic Masses this Sunday.”).  And no, there were no disruptions of church services in Virginia by pro-choice protesters on Mother’s Day, nor presumably were there ever any specific or credible indications that there were going to be any such disruptions. So again, what Miyares was doing was “pushing right-wing propaganda,” fear mongering about supposed “threats” by the “extreme left,” engaging in “divisive parroting of fictional right-wing bot accounts,” etc. None of which is remotely what Virginia’s Attorney General should ever be doing, as it’s wildly irresponsible, unprofessional, you name it.

So given all that, it’s not at all surprising that Miyares’ office had essentially no response to Abrenio’s FOIA request asking for “specific threats to Virginia churches that you referenced, that you received prior to your statements, which warranted your May 7th and May 8th statements.” Because Miyares had NOTHING. Of course, dishonest as always, Miyares didn’t just admit that, but instead claimed that although there are supposedly “10 records responsive to your request” (suuuure there are! LOL), Miyares’ office won’t share those with the public (“all are being withheld pursuant to Virginia Code § 2.2-3705.7(2)”). That Code, by the way, provides exemptions to FOIA for “[w]orking papers and correspondence of the Office of the Governor, the Lieutenant Governor, or the Attorney General.” In this case, what almost certainly is going on is that Miyares had ZERO “specific threats to Virginia churches,” but almost certainly had communications with right-wing media, which Miyares clearly doesn’t want to share with the public. Unacceptable. 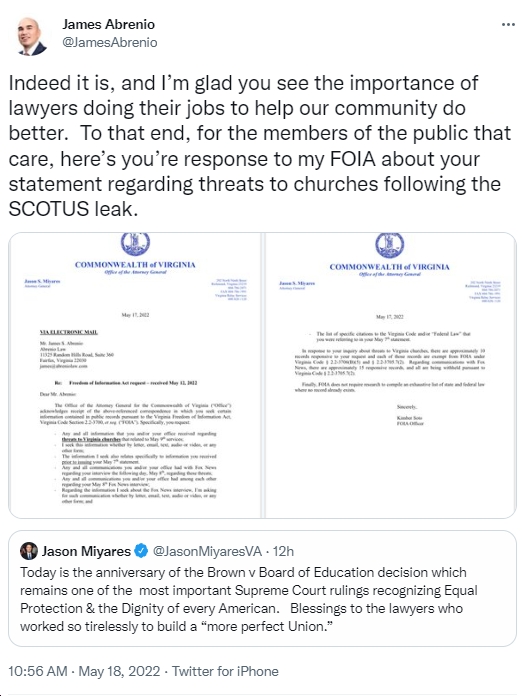 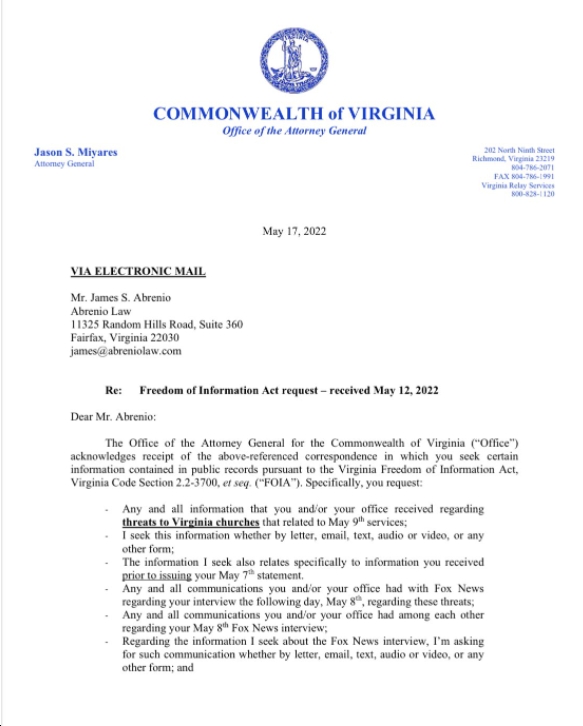 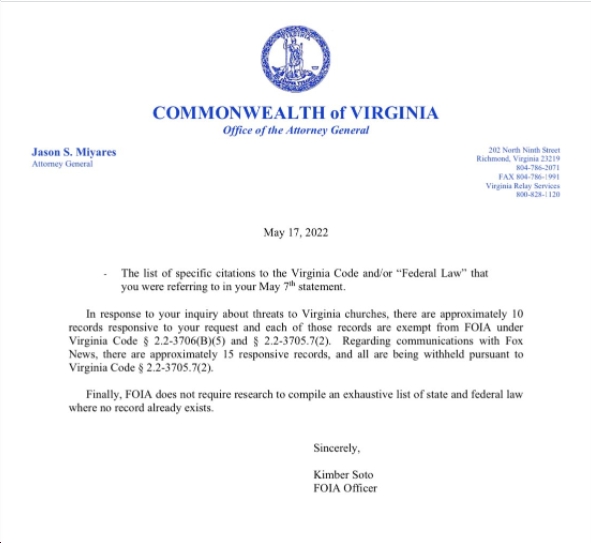