Thanks to Andrew Whitley for his service to Virginia Democrats since January 2020 – lots of hard work, a bunch of successes (e.g., tons of progressive legislation passed; Joe Biden and Mark Warner winning Virginia, as well as all Democratic incumbent U.S. House members reelected in 2020), but also some setbacks unfortunately (the main one being the 2021 elections, which were largely driven by factors outside of the state party’s control).

Anyway, with Whitley moving on to other opportunities, I strongly encourage DPVA to hire the best candidate for this job that they possibly can, and also to do so expeditiously (within a few weeks?), as we REALLY can’t afford a vacuum right now, given all that’s happening in Virginia and in the country, as well as the urgent need to win elections this fall against a bunch of climate-science-denying, anti-democracy, Trumpist, extremist Republicans! And we definitely need someone who can both do the nuts and bolts of running a state party, as well as be effective a messaging, whether on social media or “traditional media.” So…good luck with the hunt for a successor to Andrew Whitley, and for all our sakes, please choose wisely! 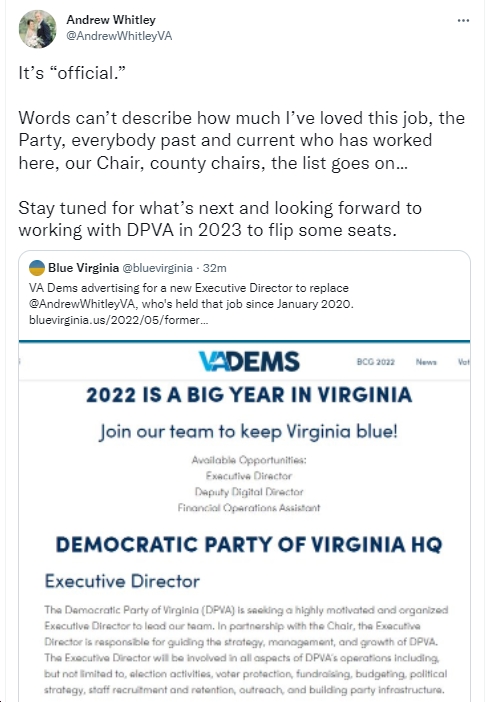