UPDATED 6/8: See below for video of yesterday’s discussion/debate by Prince William County Board members on the #PrideMonth resolution. The comments by far-right Supervisor Jeanine Lawson (R) were particularly nasty, homophobic, bigoted, etc., as is usual with her (“I believe even more that this movement has evolved into something unrecognizable even to people who supported gay rights….even a lot of those supporters cannot even recognize today’s movement of the LGBTQ and then there’s now so many acronyms behind it…’drag queen story  hour’ in libraries…the sexualization of our children is appalling to me, and this is a movement that condones it, defends it…refusal of the Supreme Court Justice to define a woman…and last but not least, people who have had sexual changes, medical procedures that have regretted…their sex operations, and when they regret it they are now demonized, demonized by this very same movement that is supposed to be tolerant…“) Just disgusting. And the comments by far-right Supervisor Yesli Vega (R), who is running for U.S. House in VA07, were also absurd (“It does nothing to unify Prince William County; if anything, it further divides…there is zero unity in that…because I am a Christian, this proclamation and the writings that it contains goes against my faith”). Also, check out the *excellent* (supportive, pro-LGBTQ, inclusive, etc.) comments by Chair Ann Wheeler (D) and Supervisors Kenny Boddye (D), Margaret Franklin (D) and Andrea Bailey (D). Nice job to those four Supervisors! Finally, can anyone decipher what on earth Supervisor Victor Angry (D) was talking about (“Listen, I’m supporting this. I would even want to at some point stop us from doing this, because every year we go through this same thing, and tomorrow everyone will be right on these streets loving on each other…c’mon, what is this really about, 19 kids are dead in Texas, we’re sitting here talking about people’s rights…this is not what it needs to be.“). Wuuuuut?!?

See below for a tweet by Del. Danica Roem about how “this is exactly why #PrideMonth matters” – and then check out the live tweeting by reporter Nolan Stout about some of the disgusting, homophobic and transphobic, comments being made by far-right Prince William County Supervisor Jeanine Lawson (R) – who “decrie[d] ‘drag queen story hour in libraries,’ ‘sexualization of our children,’ and ‘the biological males competing and dominating in female sports’ – as well by anti-LGBTQ members of the public. For instance:

If you want to watch the Prince William County Board meeting, including the ignorant and appalling commentary by the anti-LGBTQ bigots, click here, and to view the proclamation they’re discussing, click here. 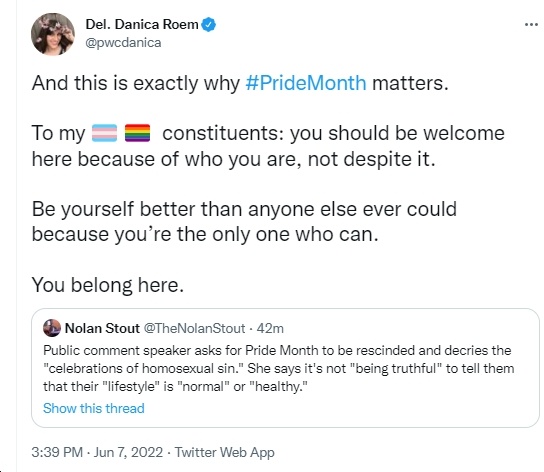 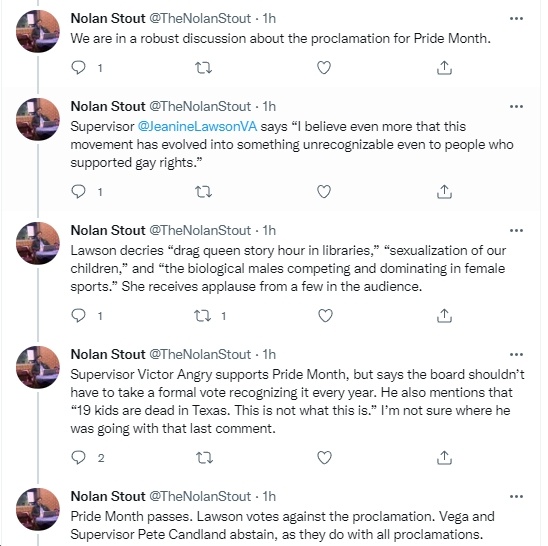 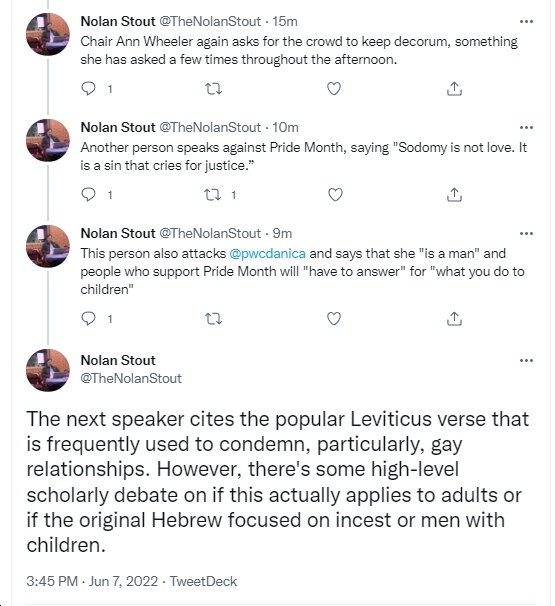