See below for a tweet from VA Senate President Pro Tempore Louise Lucas and a letter from Del. Rasoul, regarding “a coalition of thirty legislators in calling on the Biden Administration to take action for Asim Ghafoor, a Virginian [who] has been detained in the United Arab Emirates unjustly and without proper evidence,” after being “convicted on unsubstantiated charges of money laundering and tax evasion by the UAE Government.” For more on this story, see Video: Rep. Jennifer Wexton Holds Press Conference Advocating for Asim Ghafoor, Virginia Resident Detained in the UAE; Senators Warner and Kaine; Reps. Wexton, Beyer and Connolly Call on President Biden to Raise the Detention of Virginian Asim Ghafoor with the Emirati Government; and Reps. Wexton and Connolly, Former VA Sec. Education Qarni Demand Answers in Case of Loudoun-Based Civil Rights Attorney Asim Ghafoor’s “politically motivated arrest” by the United Arab Emirates.

ROANOKE, VA – Del. Sam Rasoul has led a coalition of thirty legislators in calling on the Biden Administration to take action for Asim Ghafoor, a Virginian that has been detained in the United Arab Emirates unjustly and without proper evidence. Asim Ghafoor was convicted on unsubstantiated charges of money laundering and tax evasion by the UAE Government.

Asim Ghafoor was arrested by UAE authorities July 14, 2022 and sentenced to three years prison two days later, July 16. During his arrest Asim Ghafoor was denied due process, unable to speak with his legal counsel during that time. Since convicted Ghafoor has only been granted mere minutes with his lawyers, an inadequate amount of time to be able to build any form of defense.

“Mr. Ghafoor’s retrial is set for Monday, August 1st, and he has not been given more than mere minutes to speak with his lawyers. Please, Mr. President, take immediate action to right the wrong that has been done to Mr. Ghafoor. This cannot wait.”

A copy of the submitted letter can be found here.

These legislators join their Virginia federal colleagues, Senators Kaine and Warner, as well as Congresswoman Wexton, and Congressmen Beyer and Connolly in calling on the Biden Administration to take action.

Asim Ghafoor has also reportedly been experiencing COVID-19 complications after contracting the virus in jail and there is no evidence he has received required medical care, making the need for the White House to take swift action even more urgent. 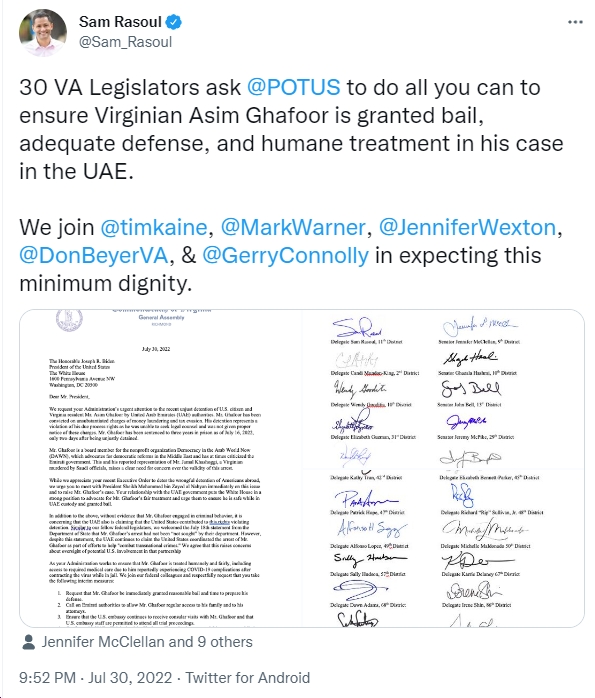