Washington, DC – This week, U.S. Representative Jennifer Wexton (D-VA) held a press conference with other Members of Congress advocating for due process and fair treatment of Asim Ghafoor, a U.S. citizen and resident of Virginia’s 10th District who has been arrested in the United Arab Emirates (UAE). Joining Wexton were U.S. Representatives Don Beyer (D-VA), Lloyd Doggett (D-TX), and Eric Swalwell (D-CA). 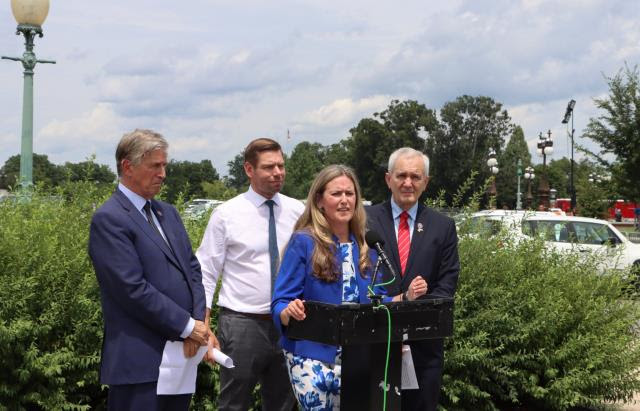 “Mr. Ghafoor was provided no information regarding his charges, he was given no opportunity to defend himself, and although he has a rehearing scheduled for August 1st he has not been permitted to meet with his attorneys,” said Representative Wexton. She continued, “I, along with many other Members, have called for greater transparency into Mr. Ghafoor’s detention and have advocated for fair treatment and due process. Today, we reiterate those basic demands to guarantee Asim Ghafoor’s health and safety – that he be granted immediate access to counsel, consular services, and his family, that the UAE ensure that he will receive humane treatment and fair treatment including immediate access to required medical care, and third that he be released on bail while he is awaiting his trial.”

The Members called for Mr. Ghafoor to be released on bail as he awaits trial, receive humane and fair treatment including medical care, and be allowed to meet with his lawyers, family, and U.S. consular services. They also thanked those around the country who have spoken out in support of Mr. Ghafoor and vowed to continue pressing the issue until they get the answers they are demanding.

Asim Ghafoor was detained by United Arab Emirates (UAE) authorities on July 14, 2022 while transiting Dubai International Airport. He was convicted in absentia on currently unsubstantiated charges and sentenced to three years in prison without being provided any information regarding his charges or being given the opportunity to defend himself. He is currently awaiting a rehearing, which is set to begin on August 1, 2022. In the nearly two weeks since his arrest, Mr. Ghafoor was denied bail and has not been able to meet with his attorneys or his family, and he still has not been given the case files related to his detention. He has had no access to consular services since July 18.

Mr. Ghafoor is a board member for the nonprofit organization Democracy in the Arab World Now (DAWN), which advocates for democratic reforms in the Middle East and has at times criticized the Emirati government. Mr. Ghafoor was also friends with and represented Jamal Khashoggi, who was brutally murdered by Saudi officials in 2018.

The full video of the press conference can be found here.