Not surprisingly, every U.S. House Democrat today voted for the Presidential Electoral Reform Act, while 203 out of 212 Republicans – including all four Republican U.S. House members from Virginia – voted NO on ensuring that Congress counts votes as *required by the Constitution*. So this vote really drives home how important it is NOT to put Republicans in charge of the US House, because clearly they will not only NOT protect our democracy, they will continue assaulting/undermining it. Needless to say, that is completely unacceptable and disgraceful. See below for statements from Virginia’s Democratic members of Congress, explaining more about this important piece of legislation… 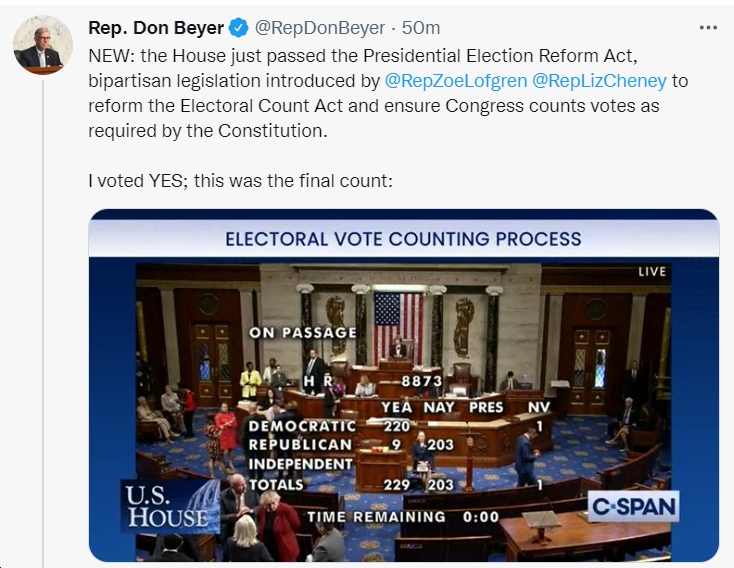 “The disturbing inaccuracies and foul play that led to the events on January 6th have demonstrated an urgent need to restore integrity to our electoral system,” said Rep. McEachin (VA-04). “As we saw in the 2020 election, extremist political beliefs drove individuals, who otherwise should not have control over counting votes, to attempt to sabotage the election. We must have added safeguards to prevent future coup attempts and protect all future elections. The bipartisan Presidential Election Integrity Act will help ensure the integrity of our elections, protect the wishes of the American people, and prevent self-interested politicians from trying to manipulate election results.”

The Presidential Election Integrity Act will preserve the integrity of electoral votes by:

“While there is still more work to be done until we achieve true voting equality for all citizens in our country, including curtailing voter suppression and partisan gerrymandering, this is a step in the right direction,” continued Rep. McEachin (VA-04). “I hope to see our colleagues on the Senate side join us in passing this commonsense legislation.”

Rep. Gerry Connolly (D-VA11): “The House just PASSED the Presidential Election Reform Act to update the rules and requirements for certifying presidential elections — a big step toward ensuring the kind of subversion perpetrated by Donald Trump can never happen again.”

Rep. Luria Votes to Reform the Electoral Count Act, Protect the Rule of Law, and Prevent Another January 6 Attack

“As the Committee to Investigate the January 6 Attack on the U.S. Capitol has shown the American people, former President Donald Trump was fully informed that his claims of election fraud were false and that his efforts to overturn the election were illegal and unconstitutional. Yet, he continued to push dangerous lies, conspiracies, and bogus legal schemes to the American people to overturn the election and incite the violence that led to January 6,” Rep. Luria said. “The bipartisan Presidential Election Reform Act is the first step to ensuring that future efforts to steal a presidential election from the people will not succeed. As a 20-year Navy veteran, I took an oath to protect and defend the Constitution from all enemies, foreign and domestic. My vote today to protect, preserve, and defend our democracy is a continuation of that solemn oath. I look forward to working with colleagues on both sides of the aisle to strengthen our election system and prevent another deadly January 6 attack on the U.S. Capitol.”

The Presidential Election Reform Act will reform the Electoral Count Act to ensure that Congress counts the votes as required by the Constitution, including by ensuring that Congress receives a single accurate electoral certificate from each state, requiring that States select electors in accordance with state law existing as of the date of the election, providing a federal judicial remedy in the event that a state governor refuses to certify the lawful result of a presidential election, and in other ways. The reforms do not benefit either political party.

The Presidential Election Reform (PERA) will:

Ensure that Congress receives a single, accurate certificate from each state

Ensure that Presidential elections are only extended for genuine catastrophic events

Following the 2020 presidential election, Donald Trump engaged in what a federal judge found to be “a campaign to overturn a democratic election, an action unprecedented in American history.”

Today, I voted to prevent another January 6th insurrection from ever happening again. pic.twitter.com/Zbtw5YVQs3