See below for tweets by Del. Candi King (D-Prince William County/Stafford County) and former Del. Josh Cole (D-Fredericksburg/Stafford County) regarding “how Yesli Vega corrupted the debate process to install a far-right, biased ‘moderator’ who basically endorsed her.” According to Del. King, she’s also “deeply concerned about the PWC Committee of 100’s role in this,” “bowing to pressure from the Vega campaign, [not] only on the moderator, but also the questions.” Per Del. King, what happened was:

First, Vega wanted to select the moderator. When that request was denied, she threatened to cancel. They added Larry O’Connor to appease her. Next, Vega was going to receive the questions ahead of time, and the so-called “Questions Committee” was filled with members of her party.

…The entire ‘debate’ was a last ditch effort by Vega to create Trumpian confusion after months of answering for her extreme positions on abortion, rape-related pregnancy, conspiracies, and lies.

Crazy. And as former Del. Josh Cole explains, “Vega has repeatedly rejected ANY debate”; “Vega refused the…@MaryWash debate”; and “Spanberger is WILLING to debate – she has expressed NUMEROUS times she wants to – she WONT debate with a Vega supporter (should be nonbiased mod).” Pathetic all around by Vega, and obviously not someone who’s worthy of being in Congress! 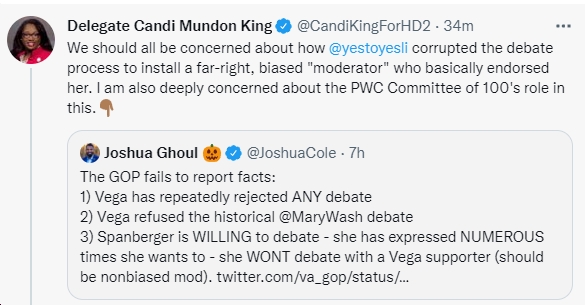 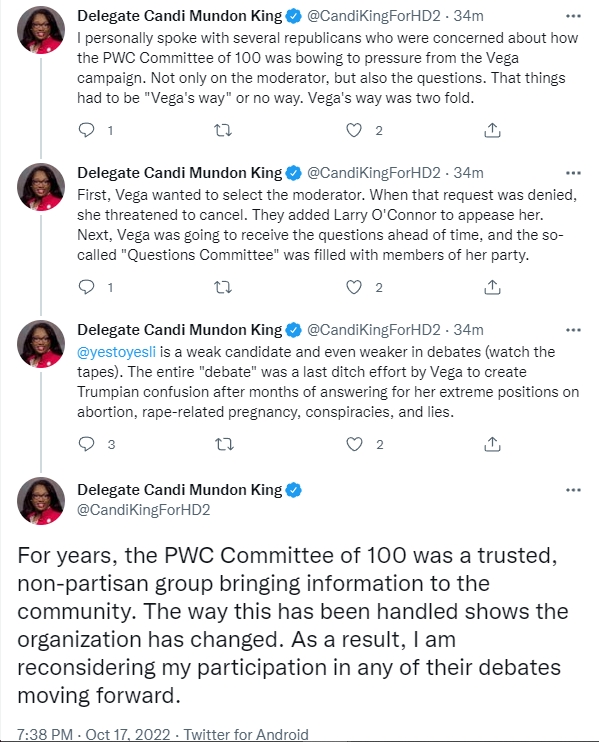 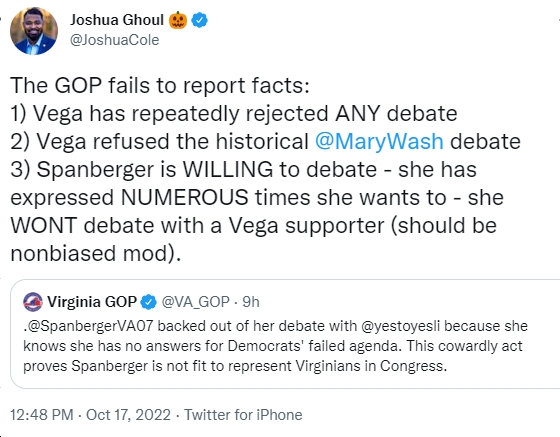 Video: Rep. Abigail Spanberger (D-VA07) Says House Republicans’ Willingness “to vilify [the FBI and other federal agencies] for political gain is stunning to me”

Video: On “Morning Joe,” Rep. Abigail Spanberger (D-VA07) Says Intra-GOP Fighting “is deeply concerning,” Not Just for the Speaker but Also for the Debt...