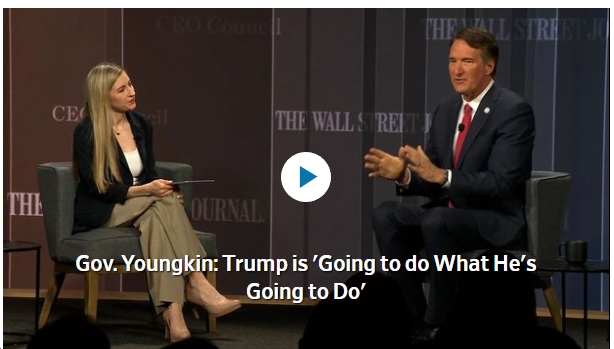 So, as usual with Glenn Youngkin, there’s a LOT of bullsh*t in here. First of all, Youngkin’s comment about Trump going to do what Trump’s going to do is just sidestepping a direct answer to the question, and a sign that Youngkin STILL won’t clearly and unequivocally break from the guy who tried to overthrow our democracy in 2020/2021, and CONTINUES to try to do so in 2022. Pathetic by Youngkin.

Second, Youngkin suddenly taking a pragmatic stance, talking about how voters just want to see results, etc., is in COMPLETE CONTRAST to the *actions* Youngkin has taken since becoming governor, which have included campaigning for far-right/”Big Lie” extremists like Kari Lake, Tudor Dixon and Paul LePage; pushing highly divisive “culture war” nonsense in Virginia; staying mostly in (and playing mostly to) the right-wing echo chamber; etc.

Third, Trump did NOT walk back his comments, he flat-out lied by claiming that he never said the exact words he said! And Youngkin again didn’t directly call Trump out for that, while adding in complete b.s. “both-sides” nonsense about “the other party” (he means Democrats) supposedly “erod[ing] many of the constitutional principles that I hold dear.” Just to be clear, that is 100% false, and simply an attempt by Youngkin to distract from the fact that all the insurrectionism, talk about terminating the constitution, meeting with white supremacists, etc. is coming from Donald Trump, the leader of HIS PARTY! So don’t let him gaslight you, because that’s obviously what he’s attempting to do…