2019 Elections notlarrysabato - January 7, 2018 5
by Ben Tribbett There has been a lot of misinformation going on about the recounts in Virginia, including some who have claimed this election was...

Virginia Politics notlarrysabato - May 31, 2016 9
By Ben Tribbett Four years ago I was glad to step forward and run for the Democratic National Committee (DNC).  While running against incumbents was...

No primary challengers is bad news for Democrats 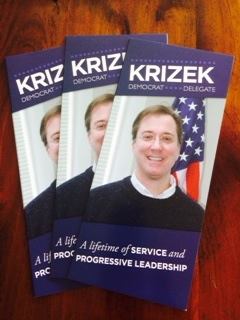 A couple of weeks ago, I posted something I thought would be uncontroversial on my Facebook wall- that the lack of primary challenges in strongly Democratic open seats is a really bad sign for the Democratic Party of Virginia in this years election.  Specifically, I noted two very important seats in Northern Virginia that are open this year- the 44th district seat (held by Scott Surovell) where Paul Krizek is running and the 86th district seat (held by Tom Rust) where Jennifer Boysko is running.  But instead of agreement, I got a lot of anger on why I thought these candidates should be challenged.

So here I am to explain further, and hopefully make everyone understand why this is so unhealthy.

First of all, the average incumbent in Virginia serves about 6-8 terms of office- with many serving longer.  That means candidates elected this year will probably serve until sometime between 2027 and 2031.  In the case of Boysko and Krizek, both are young- and I wouldn't be surprised to see them still in office in 2041.

Let's go through some recent history on why this is such a bad idea.  With the Democratic Party so small in the House, each member has outsized influence. Three of the last four caucus elections have either tied, or had results within 1 vote that changed the outcome.

Thank You For Your Support Blue Virginia

There's a lot to talk about from yesterday's convention.  Before we all dive into the details, I just wanted to write a quick note of thanks to the entire Blue Virginia family for their support of my campaign for the DNC.

Look, I know that I was a seriously flawed candidate.  For people out there that couldn't understand the bigger issues of why I was running to fix the party it was very easy to just latch onto something provocative I wrote on NLS over the last seven years and deem me unfit for any position.  I knew that going in.

I was surprised though at how much further the attacks went beyond that.  Emails that circulated the week before the convention included all sorts of allegations- far too many to every have any hope of responding.

Why was there such a negative campaign run against such an obviously flawed candidate?  Because the establishment candidates literally had nothing positive to report for their time in office.  People weren't supporting me so much as they were supporting the issues I was running on.

In short, I'm taking these results as a huge victory.  At every other state convention I've ever attended (back to 1996) ballots are counted by putting them into 2 piles- slate and no slate.  Every time the slate pile is bigger and the ballots are never even counted, the slate is declared the winner.  This time, together with Del. Lionell Spruill we forced the slate to almost exactly 20% (297 of 1480) of the vote.  That meant the ballots had to be counted, and if Frank or George came in under 50% then we would force a runoff for the first time.  And when the votes were counted our incumbent DNC member Frank only got 55% of Virginia Democrats to re-elect him, and his ticket mate fell short, meaning we had forced the run off!

Thanks for sticking with me and helping us make a little bit of history.  I'm sorry the runoff vote that we earned never took place. I'm sure there will be a lot more discussion about that and other things that happened this weekend in the future, but don't let that overshadow what we did accomplish together.