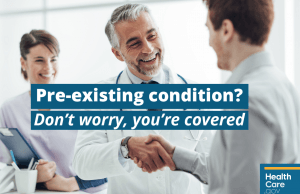 Blue Virginia - October 9, 2018 1
From the Democratic Party of Virginia: Dave Brat BLATANTLY LIES about pre-existing conditions record  Brat, under siege for voting to gut protections for those who pre-existing...

lowkell - September 28, 2018 4
I love love LOVE this ad from Abigail Spanberger (VA-07). Why? First of all, it makes it PERSONAL and REAL, unlike the vague/detached talk...

One Immediate Benefit of Health Reform

As the Wise Free Medical and Dental Clinic begins yet again to serve those in need, the new health reform law will allow a few of the people who attend Wise for medical help to receive insurance they might have been denied because of some pre-existing condition.

The Affordable Care Act created a new program- the Pre-Existing Condition Insurance Plan - for people denied health insurance by private insurance companies because they have a pre-existing medical condition.

Virginia is one of the states that has opted by default to be part of the federal insurance program, rather than set up a state plan. (I suppose if the state had, by some miracle, attempted to develop its own plan, Ken Cuccinelli would have sued his own administration.)

As of July 1, the plan is open to American citizens and legal immigrants who have been at least six months without health insurance because they were denied coverage. The plan isn't great - and it's fairly costly since it's individual coverage - but it will keep tens of thousands of people from going bankrupt because of medical bills.