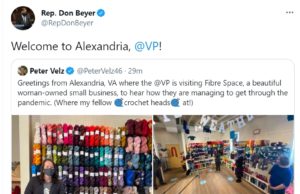 lowkell - March 3, 2021 0
Welcome to Virginia, VP Kamala Harris, and thanks for all you're doing to help women-owned small businesses recover from the COVID-19 pandemic and thrive... 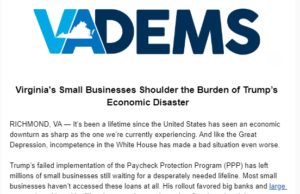 Blue Virginia - May 21, 2020 1
From the Democratic Party of Virginia: Virginia's Small Businesses Shoulder the Burden of Trump’s Economic Disaster RICHMOND, VA — It’s been a lifetime since the United...

No, Rep. Dave Brat, Small Businesses Are NOT All Your Constituents

Blue Virginia - December 14, 2017 1
By E. D. Hartman, Midlothian In recent interviews. Representative Dave Brat (R-VA07) seems to be under the impression that every citizen in the 7th Congressional District...

Some Millionaires and Small Business Owners Say No to Tax Cuts

Teddy Goodson - November 20, 2010 1
It turns out that not every millionaire or small business owner is in lock step with the Chamber of Commerce and Republicans when it comes to extension of the Bush tax cuts for the wealthiest among us.  According to Isaiah J. Poole in Campaign for America's Future two "significant mass defections" have turned up that support extension of the tax cuts for middle class Americans but do not support extension of those cuts for those earning more than $250,000, and these independent groups are comprised of the very classes which supposedly would benefit most from the position of the C of C and the Republicans

"President Obama signs a bill that will allow small businesses to grow and hire new workers by providing tax breaks, better access to credit and other incentives."

By the way, do you know how many Republicans voted for this in the House and Senate? 3 and 2, respectively. Wow.

The liars get more ingenious by the day. They purport that a huge number of "small businesses" will be adversely affected by the Democratic tax plan.  They lie.  Ladies and Gentlemen, America has been scammed by the GOP. Specifically, they are scammed by the nefarious argument of GOPhers and the tax dodging plutocrats among some very large corporations. This is a story about pass-throughs, pretense (and more). And if you missed the original Keith Olbermann piece, this is a really important read and video (above). The first three segments of Olbermann's show deal with this story.

Mark Warner: “My businesses prospered greatly during the ’90s”

On Squawk Box, Mark Warner talks small business and extending tax cuts to the richest Americans. According to Warner, we should extend the Bush tax cuts to those making less than $250,000 per year, but if we extend the cuts to the richest of the rich, then "we're gonna lose all credibility that we're gonna be willing to take on the deficit." I couldn't agree more.  Also, Warner makes an excellent point about the tax rates that existed during the 1990s, when the U.S. economy boomed:

I don't mind going back to the rates that I paid under Clinton and Bush 1, when I was in business, because frankly, my businesses prospered greatly during the '90s.

Yes, they most certainly did, along with the rest of our economy. Why wouldn't we want to go back to that, especially when we've seen what the Bush/Cheney/Republican Congress policies did to us in the 2000s?