A Siegel - September 2, 2018 2
Looking across the Commonwealth's politics over the past week sparked a thought: it seems as though Virginia's GOP has morphed into... The Party of Crime...

lowkell - April 13, 2018 1
See below for video of Wednesday night's VA-02 candidate forum between Democrats Karen Mallard and Elaine Luria. Also see below for a press release...

lowkell - March 14, 2018 11
See below for video of last night's VA-02 Democratic forum, sponsored by the Hampton Democratic Committee. The candidates in attendance were: Karen Mallard, Elaine...

lowkell - March 7, 2018 7
See below for highlights and a press release from the Wason Center for Public Policy at CNU. Virginia voters disapprove of Congressional Republicans by...

lowkell - February 24, 2018 7
According to VA-02 Democratic candidate for Congress, Karen Mallard, who "grew up in Wise County surrounded by guns - my family had guns my...

Redistricting: Where We’ve Been, Where We Are, and Where We’re Going 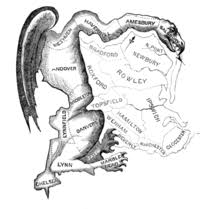 Lowell already brought to our attention the good news that the courts handed the Republicans a defeat in the first round of what may prove to be a long legal fight over redistricting in Virginia. I am no legal scholar, but I was excited by the news that the judge dismissed the Republican argument that "shall" doesn't really mean "shall" and found that the group of Virginia citizens had standing for the lawsuit to move forward. But Governor McDonnell is moving forward with the same incumbent protection plan that the House Republicans (with a few unfortunate Democratic allies) pushed through last year in 2011. With redistricting still a big question mark moving forward, just months away from the November election, I wanted to take some time to sort through the entire mess. Where we've been, where we are, and where we're going.

Where We've Been
Going back over a decade ago, Virginia Republicans in 2001 had the "privilege" of controlling redistricting for the first time in the modern era. They leveraged this advantage into pressuring Virgil Goode, already a Democrat-In-Name-Only who had voted to impeach President Clinton, to officially leave the party and begin to caucus with the GOP. They also worked to shore up newly elected Congressman Randy Forbes in the 4th, who had won a special election by a very close margin.

Below, I've calculated the partisan lean of the post-2000 census drawn district based on the 2000 Presidential numbers relative to the national average. So a R +6 district is one in which George W. Bush ran 6 points ahead of his national showing (47.87%, or rounded to 48%), which as we all know was less than Al Gore's popular vote national...

Daily Press: A Vote for Rigell is a Vote for Bush!

I read a lot of political endorsements, but today's Daily Press endorsement of Scott Rigell could be my favorite ever:Check it out:

TheGreenMiles - October 8, 2010 6
You have to understand something about Republican opposition to Democratic reforms: It has nothing to do with the merits of the policy. Republicans decided immediately after the 2008 elections to block everything the Democrats tried to do. I mean, when the GOP, which purports to be the party of small businesses & tax breaks, is filibustering tax breaks for small business, you know they've abandoned all principles.

So when Glenn Nye brags about voting against health insurance reform, clean energy reform & the TARP program that could end up turning a profit for taxpayers, what he's bragging about isn't principles. Frankly, I don't even know if Glenn Nye knows what Glenn Nye believes in.

What he's really saying is that when America faced great crisis, Glenn Nye stood with those who sought political gain from blocking solutions.