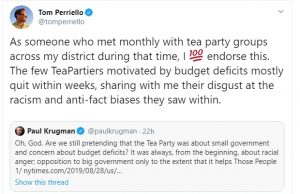 NY Times “Omits Mention of Race From Its History of the...

lowkell - August 29, 2019 0
Yes, the NY Times has struck again, this time "omit mention of race from its history of the tea party."  In response, Jamil Smith...

lowkell - January 6, 2019 3
by Lowell Here are a few national and Virginia news headlines, political and otherwise, for Sunday, January 6. Britons would now vote to stay in...

The Profound Hypocrisy of the Republicans Depicted by Paul Krugman in...

Andy Schmookler - January 28, 2018 4
Paul Krugman has hit the ball out of the park, as he sometimes does. As he is using the medium of the Tweet, his...

Silver Lining of the Lauer Debacle?

Andy Schmookler - September 11, 2016 0
These past few weeks in the presidential race have been troubling, not least because of the failures of the media. These failures culminated in...

When you heard the terrible news from Arizona, were you completely surprised? Or were you, at some level, expecting something like this atrocity to happen?

Put me in the latter category. I've had a sick feeling in the pit of my stomach ever since the final stages of the 2008 campaign.

So begins Nobel Laureate Economist Paul Krugman in his op ed this morning, Climate of Hate

Why mention his award? Because as an economist he is used to examining the data and seeing the patterns. And on this the patterns are crystal clear.

Read his column.  It is as well written as usual, which makes it hard to excerpt.

I will explore aspects of it, and offer thoughts of my own.

Hostage taking and its effects

teacherken - December 10, 2010 8
are the subject of Paul Krugman's New York Times column this morning, with the title Obama's Hostage Deal.  While he acknowledges that Obama obtained more in return for his concessions on the Bush tax cuts for the rich than he (krugman) expected, he remains concerned because

Mr. Obama has bought the release of some hostages only by providing the G.O.P. with new hostages.

Krugman raises issues about the timing of the ending of some provisions, the political effects of the impact upon unemployment.  The column is definitely a must read, regardless of where you think you are on this deal as presented by the President.

Here's the thing.  I think we have forgotten our own recent history when it comes to hostage taking.   Might I remind people how we got into Iran-Contra?