Yes, the NY Times has struck again, this time “omit[ting] mention of race from its history of the tea party.”  In response, Jamil Smith of Rolling Stone tweeted:

“This @jwpetersNYT retrospective on the Tea Party’s “summer of rage” ten years ago makes not a single, solitary reference to race or racism. Nor does it acknowledge the reality that a good deal of it involved opposing President Obama because he was black.

The @nytimes added the Tea Party’s racism to this report, but the sentence—and it’s only one—is rubbish. Rather than give proper context, it puts it in the eyes of Obama allies as beholders, largely blowing it off as folks with signs. More revision needed.”

“Oh, God. Are we still pretending that the Tea Party was about small government and concern about budget deficits? It was always, from the beginning, about racial anger; opposition to big government only to the extent that it helps Those People.”

Exactly. Recall that, in that insane “Tea Party summer” ten years ago, then-Congressman Tom Perriello came face-to-face with what the Tea Party was all about, including his brother’s gas line being “intentionally cut” and a bunch of what NPR called, in typical wimpy NPR style, a “series of rowdy town halls.” Rowdy? Yeah, that’s one word for what happened at those town halls.

Fortunately, Tom Perriello himself remembers exactly what happened, and has posted on Twitter to remind everyone. See below for Perriello’s tweets, in which he notes that “the few TeaPartiers motivated by budget deficits mostly quit within weeks, sharing with me their disgust at the racism and anti-fact biases they saw within.” Perriello also shares his conversation with “an African-American leader in Farmville,” who pointed out that many of the Tea Party people were the *same people* who had fought “integration decades earlier” during the “Massive Resistance” era. The bottom line, according to Perriello?

“…to say that fear of change, including in demographics and leadership, were clearly the animating factor rather than fiscal conservatism or liberty…Which, not surprisingly, is further proven by the same base caring not at all that Trump is exploding the deficit and making authoritarian moves that would enrage any true libertarians.” 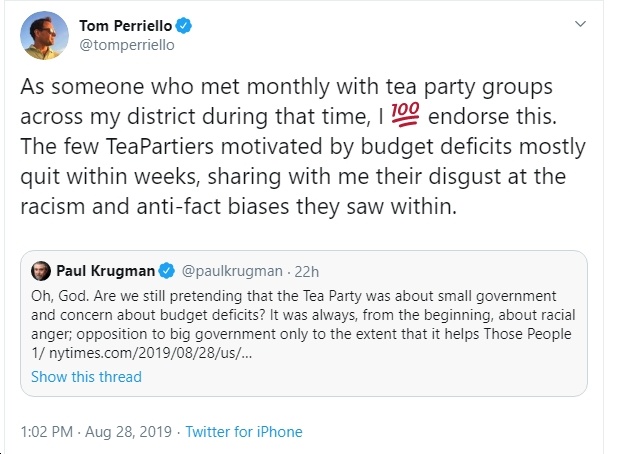 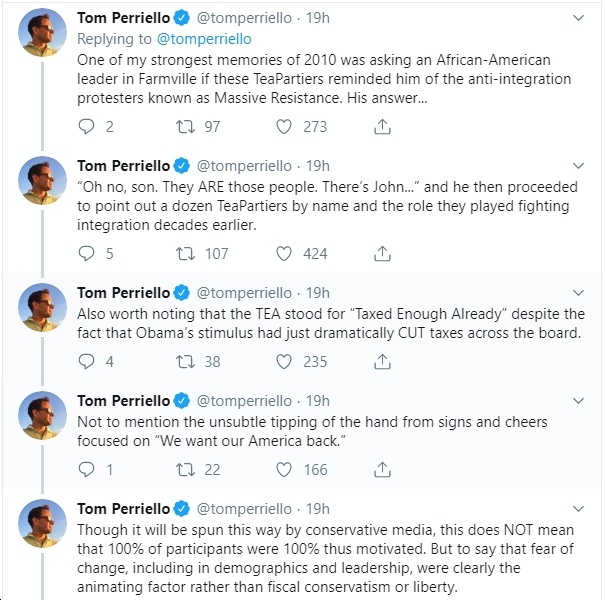