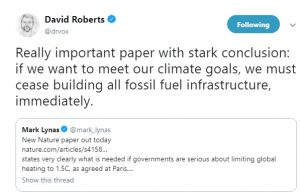 STILL Confused Why Atlantic Coast and Mountain Valley Pipelines Must Be...

lowkell - July 5, 2019 2
At this point, given the overwhelming amount of anecdotal and scientific evidence (e.g., the current heat waves in Alaska and Europe; another hottest month... David Roberts writes in Popular Science about the Atlantic Wind Connection (AWC), a proposed $5 billion undersea power grid. The plan by Maryland-based Trans-Elect would provide the infrastructure for wind farms stretching hundreds of miles down the Mid-Atlantic coast, from northern New Jersey to southern Virginia. David walks through the technical aspects in easy to understand way and talks about how the AWC would ease strain on our existing power grid, concluding its biggest advantage would be its scale:

It would tie together wind farms distributed over hundreds of miles of coastline, and because the wind will usually be blowing somewhere, its breadth would compensate for the unpredictability of wind at any individual site. Together, the steadier flow of power, combined with the money that wind-farm developers will save by feeding electricity into an existing network, could make wind power cheaper than electricity generated by natural gas or, in some cases, even coal.

Obviously, there is a long way to go. Multiple regulatory authorities will have to sign off before the AWC becomes reality. But the large-scale, holistic approach to offshore wind power that it represents is already echoed by at least two undersea power-transmission proposals being considered in Europe. And if the AWC succeeds in delivering predictable, low-cost, low-carbon power to the mid-Atlantic, expect the number of imitative projects to grow.

That $5 billion price tag may sound like a lot at first, but let's put it in context. The AWC would support wind power equivalent to 10 coal-fired power plants, which cost $1-2 billion each, if not more. (Cost overruns have just pushed the price tag of a new coal-fired plant in Wisconsin up 9% to $2.4 billion.)