Thinking About Impeachment and 2020? Here’s What’s At Stake Tomorrow Right...

Cindy - November 4, 2019 2
Think tomorrow's election is a referendum on the Trump presidency? Hell yes it is! Virginia isn't the bellwether state for nothing. Just as the... 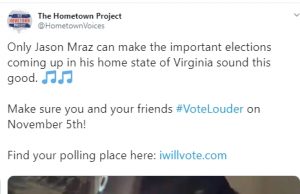 Video: Jason Mraz – “There’s a lot of attention on the...

lowkell - October 28, 2019 1
See below for a video by Jason Mraz, courtesy of The Hometown Project, on why it's so important to vote on Tuesday, November 5th... 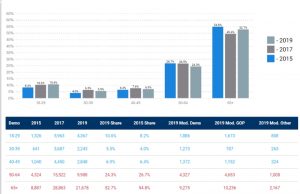 Blue Virginia - October 24, 2019 1
See below for an interesting analysis of the early vote in Virginia so far, by Tyler Cherry of SKDKnickerbocker TargetSmart. Click on the graphics to... 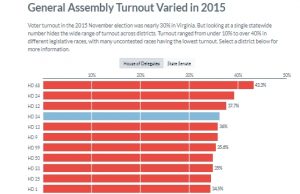 lowkell - September 2, 2019 0
The following graphics, by VPAP, are very helpful in understanding the voter "dropoff" in off/odd Virginia election years, like the one we're in now,... 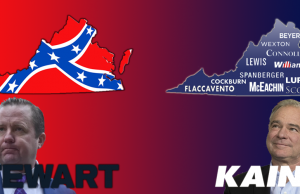 Of Kaine and Corey

Kenny Boddye - August 11, 2018 3
It’s no secret that I’ve been an outspoken critic of Corey Stewart for a long time. Upon learning about him and his history in...

I May Be Gerrymandered But I’m Voting

As I prepare to vote Tuesday, I find the prospect less that thrilling. I do have a choice in my delegate and senate races, unlike the majority of Virginians. However, the chance the people I'm voting will win is about the same odds as my winning the lottery.

Before my senate district was gerrymandered, I would have had the great satisfaction of voting for Brandon Bell over Ralph "Mr. Carpetbag" Smith. Now, I will be voting for Robert Short, a 24-year-old Iraq veteran Democrat with no money, against Steve Newman, the Falwellian Senate Republican Caucus leader. The thought that Newman would "represent" me in Richmond is disgusting, but as a friend of mine from Lynchburg joked, "The only good thing about Newman is that you won't have to see or listen to him again until the next election."

Even though I was gerrymandered out of my old house district, I have a fine Democrat to vote for. Lewis Medlin is a small businessman from Bedford County who would be a great representative. While this time Medlin has the best shot he has had in his three runs for the House of Delegates, he's still faces long odds. He's running against that old fossil Lacey Putney, the Byrd-Democrat-turned-Independent who caucuses with Republicans. Putney has a Republican opponent, Jerry Johnson, a Tea Partier who won't get many Republican votes. Bearing Drift said of Putney, "Del. Putney is not only an unofficial face of the GOP in Richmond, but he is also a recognized face among the party faithful in central and western Virginia." So, I'm sure the majority of GOP voters will break their party pledge and go for Putney.

I may not be happy with the way gerrymandering has changed my districts, but I will vote. It is imperative that all Democrats go to the polls and vote. I won't be voting for people likely to win, but Democratic turnout is the key to keeping the State Senate in Democratic hands. Everyone should also remember that local offices are on the ballot.

Is Obama Getting Bad Re-election Advice? Recently I was a (passive) participant in a conference call between Jim Messina at the White House and Virginia Democrats. It was billed as a "Momentum" call, with an advance advisory that we would be bringing up problems and ideas about the upcoming re-election campaign of Obama for the Presidency, especially in Virginia.  Since it was all in the family, so to speak, I expected to hear, and contribute to, some specific political talk in a frank and helpful manner. I was... disappointed.

The entire call was like coach's pep talk at half-time when things look a little shaky for the home team----- or, better perhaps, a corporation staff meeting where a vice-president rolls out a supposedly new/old program, and all subordinate functionaries, whatever their secret opinion of the program, brown nose like crazy to earn points for their blind loyalty.  In other words, kabuki theater.

It went sort of like this: a fulsome introduction of Mr. Messina; Mr. Messina then gave a short talk about Mr. Obama's accomplishments in his first term and segued into the upcoming re-election after commenting very discreetly on the losses in 2010, which made it even more important that we all pull together to save the country and re-elect Barack Obama; he knew the President could count on his friends in Virginia, who were also going to vote Tim Kaine into the Senate at the same time (each would apparently reinforce the other); finally, he said it was time for questions, which we could ask by punching "1" and waiting to be called on. I kept quiet, to see what happened