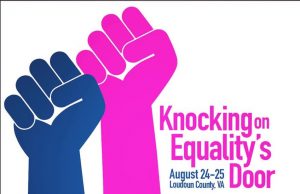 Cindy - August 26, 2019 0
by Cindy This weekend, in an epic event that launched from ten different sites and involved 35 campaigns, 200 volunteers set out with their candidate...

I stand with Prince William’s LGBT Faculty and Students

Kenny Boddye - June 8, 2017 0
As I walked around the Gainesville house and neared the backyard, I took a moment to reflect on the circumstances that had brought me...

pontoon - March 12, 2014 4
Luckily while all the wrangling was taking place yesterday regarding filings for the DPVA chairmanship, I was watching my son, a junior in high school, play in his first high school baseball game.  He has tried out for the appropriate level high school team since he became eligible...his 8th grade year.  He'd been cut each time-first cut, every year. He's continued to play baseball on travel baseball teams in an effort to improve his skills. He told me in January, "I'm not going to try out this year. Coach is never going to  choose me to be on the team."  It was his decision to make and I told him I'd support whatever decision he made.

About a week before tryouts, he came home with the Virginia High School League physical form, handed it to me, and said, "Can you get me a doc's appointment so I can get this physical?  I'm going to try out for the team."  Tryouts this year were torturous and extended because it seemed every other day weather caused another day off school...  After three days, he had survived the first cut.  Then more weather delays and finally on Monday, he learned he'd made the team after six days of tryouts over a two-week period.

For those who haven't already heard,

A federal appeals court on Tuesday declared California's same-sex marriage ban to be unconstitutional, putting the bitterly contested, voter-approved law on track for a likely appeal to the U.S. Supreme Court.

A three-judge panel of the 9th U.S. Circuit Court of Appeals ruled 2-1 that a lower court judge correctly interpreted the U.S. Constitution and Supreme Court precedents when he declared in 2010 that Proposition 8 - a response to an earlier state court decision that legalized gay marriage - was a violation of the civil rights of gays and lesbians.

You can read more here

There is a "however" in the ruling.  Gay marriage may not resume until the deadline for sponsors of the original bill banning gay marriage to file an appeal to the full 9th Circuit panel of judges.

The ruling is also a vindication for Judge Vaughn Walker, whom Prop 8 sponsors (and right-wing pols) claimed was "biased." The claim of bias is particularly amusing and ridiculous given that to follow that logic, one would have to say that neither gay nor straight judges could stand in judgment because of the implicit bias "inherent" in their own orientation. There would be no one left to rule, which would, come to think of it, mean that we'd just have to stay the heck out of other people's lives.